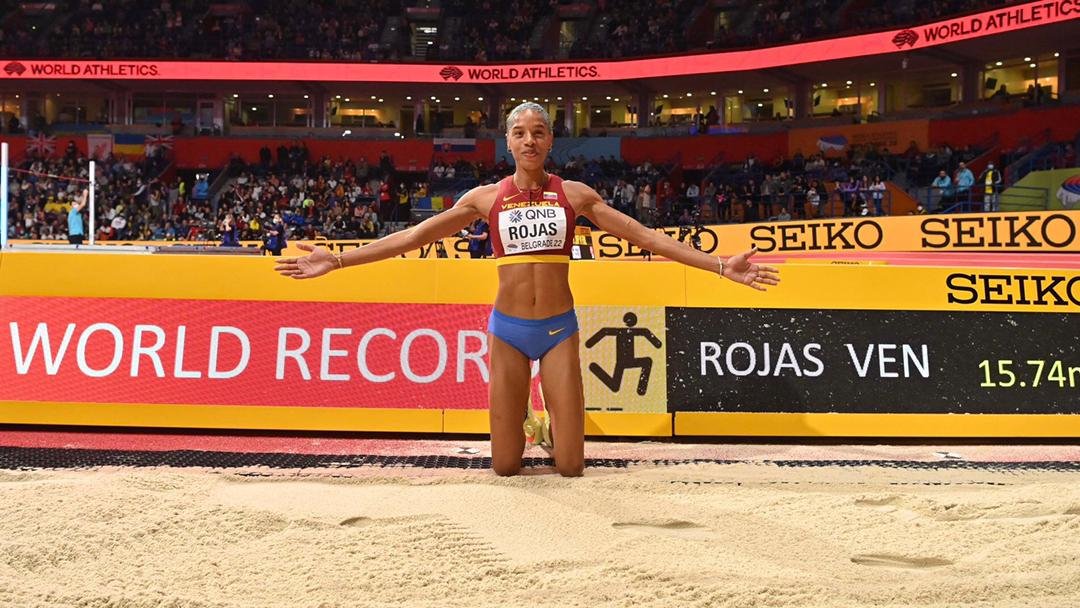 Belgrade, Serbia.- The Venezuelan Yulimar Rojas, absolute queen of the triple jump, further enlarged her legend by obtaining her third indoor world title this Sunday in Belgrade with a new record for the discipline (15.74).

With the title almost in her pocket as she was the only athlete capable of exceeding 15 meters (in her first attempt, the third and the fifth), Rojas achieved the record in the sixth and final jump to sign up for her third indoor world championship, after the achieved in Portland-2016 and Bimingham-2018 (in 2020 there was no championship due to the pandemic), AFP reported.

With that jump of 15.74 m at the Stark Arena in the Serbian capital, the Venezuelan improves her previous world record by 7 centimeters (15.67), obtained at the Tokyo Games in 2021, where she won the gold medal and She surpassed the historical mark that the Ukrainian Inessa Kravets (15.50 m) had held since 1995.

Rojas (who has not lost in a major international competition since the Colombian Caterine Ibargüen defeated him in the Rio-2016 Games) also had in his possession the best historical mark on the indoor track since he jumped 15.43 m achieved in Madrid in February of 2020.

Undefeated since 2016
Raised in Altavista, a disadvantaged neighborhood of Puerto La Cruz, a coastal city 300 km east of Caracas, the FC Barcelona athlete was chosen the best of 2020 by the International Federation after breaking the indoor record.

The absolute superiority of the Venezuelan in this discipline, of which she is also a double outdoor world champion (2017 and 2019), was once again in evidence, distancing the silver medalist, the Ukrainian Maryna Bekh-Romanchuk, by one meter ( 14.74m).

After Yaroslava Mahuchikh’s high jump gold on Saturday, it is the second medal for the Ukrainian delegation, made up of only six athletes in Belgrade due to the war situation in this country after being invaded by Russia.

Jamaican Kimberly Williams completed the podium, with a best jump of 14.62 m.

The Spanish Ana Peleteiro, third in the last Tokyo Games, achieved a best jump of 14.30 m, her best mark of the season, but insufficient to fight for the medals and far from the 14.87 m that gave her the olympic bronze.

Closer was the Cuban Liadagmis Povea, who finished in fifth place with a best jump of 14.45 m.

The morning session of the last day of the championship had a bittersweet taste for two other Olympic champions. The Italian Gianmarco Tamberi, who shared gold in Tokyo in the high jump with the Qatari Mutaz Barshim, was looking for a second indoor world title, after the one obtained in 2016, but had to settle for bronze (2.31 m), behind the Swiss Loïc Gasch (2.31) and the new champion, the South Korean Woo Sanghyeok (2.34 m).

The championship will end in the afternoon with the last finals, among which the pole vault final stands out, in which the Swedish Armand Duplantis will seek a new world record after having recently left the mark at 6.19 m.

Boris Johnson: I will work to advance the interests of Ukraine

“It did not rot”: Georgina Barbarossa denied Flavio Mendoza after the controversy

Today begins the trial of the young man who confessed to killing his father, a Federal policeman

“The cessation of work in Ukraine is sanctions against our economy.” Shmygal turned to international companies