World Cup Qatar 2022: France did their homework and thrashed Australia 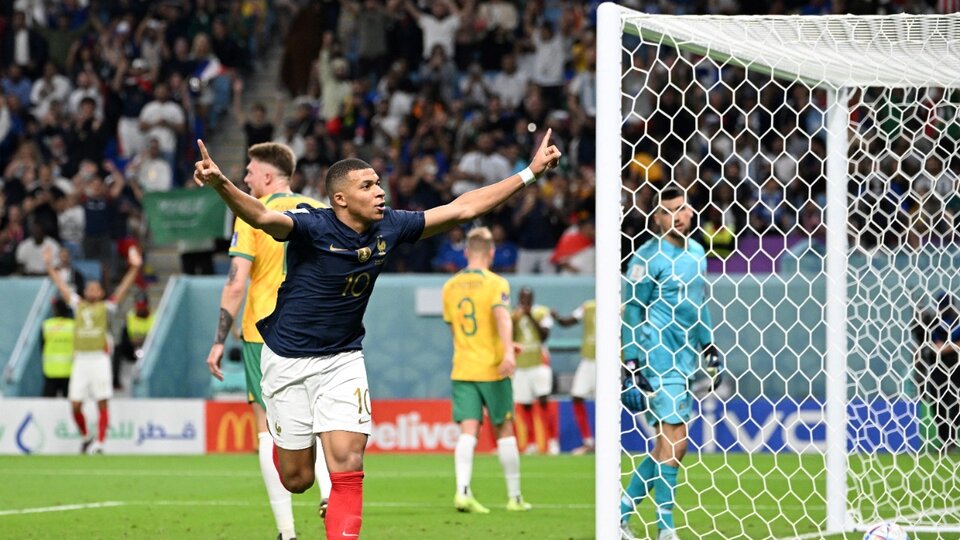 
France imposed authority and beat Australia 4-1 in Al Janoub, in the debut of both teams in the Qatar 2022 World Cup.

In the first part, Craig Goodwin surprisingly put the team led by Graham Arnold ahead, but the current world champion turned it around with goals from Adrien Rabiot, Olivier Giroud (2) and Kylian Mbappé to lead Group D alone.

The team that defends its crown obtained in Russia 2018 went out like a storm to quickly look for the difference, with a devilish Mbappé wreaking havoc with his speed on the left, plus what Dembélé could contribute on the right.

But in a day full of surprises, the one that opened the account was Australia, from a long delivery to the right flank for Leckie, he with a feint snubbed Lucas Hernández and enabled Goodwin to enter freely, who before a disjointed Gallic last line submitted goalkeeper Lloris.

In the play prior to the goal, Hernández injured his knee and had to be replaced by his brother Theo. Didier Deschamps’ team acknowledged the blow, and tried to shuffle and give again with some patience. With Griezmann somewhat delayed to set up the game and Giroud as a beacon lurking in the vicinity of the area defended by captain Ryan.

The oceanicians were attentive to the possible errors of their exalted rival, to such an extent that a pass that fell short of the recently entered Hernández was taken advantage of by Irvine, who took a right hand that came very close to a post and paralyzed more than one French heart .

However, the powerful selected bleu would reach equality after a corner, a half clearance from the Australians and a new cross from Theo Hernández that made Rabiot, with his head, shake the net and start the comeback.

Immediately, Griezmann dispatched a poisonous cross that Giroud could not take advantage of. But in the next play, Benzema’s replacement would have revenge: a bad start from Australia from the bottom led to Rabiot’s recovery, the luxury combination with Mbappé and the goal pass from the Juventus midfielder so that the 9 only had to push it .

With Giroud’s goal, France turned the procedure around in five minutes and, pure luxury, was preparing to settle the lawsuit before the break. But Australia -who could no longer find the ball and gradually lost the confidence they had in the first few minutes- almost tied it with a header from Irvine that hit a post.

The complement was a French monologue that the Australians suffered. The tally increased after a cross from the right by Dembélé that Mbappé scored with a header.

But the PSG star was on fire and with a millimeter cross he served Giroud’s headed goal – second in the Milan striker’s crop, to equal Thierry Henry’s record as the top French gunner – who ended up completely collapsing the Australians .

At the end, the French team flourished against their Australian counterpart and was able to score several more goals, but had to settle for the final 4-1. Not bad, by the way.

What are the benefits of the future sign language law, which already has half approval in Congress

Cinthia Fernández, naked from head to toe: “I leave you something even stronger…”

If you want to send your brain on tilt for 5 minutes, check out these wonderful optical illusions by Rob Gonsalves

The smoking (and vaping) epidemic is over: young people smoke less than their parents