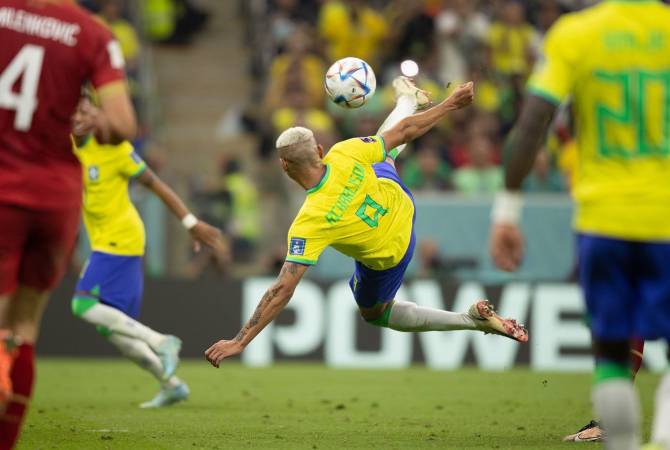 YEREVAN, NOVEMBER 25, ARMENPRESS. In the last match of the first round of the group stage of the FIFA World Cup, one of the main favorites to win the championship, the Brazilian team, entered the fight. the opponent was the selection of Serbia.

At the start of the game, the Serbs tried to play bold football, and in the initial part it worked for them. Although the Serbians did not create dangerous moments near the Brazilians’ goal, they managed to prevent the Brazilians’ attempts to advance by pressing and exert some pressure. However, Brazil gradually took the initiative. Brazil dominated the ball more, attacked more and threatened the opponent’s goal. In the first half, however, Brazil did not open until the end. The half ended without goals, and in the second half, the Serbs felt the full strength of the Brazilian team.

From the start of the second half, the players of the Brazilian national team rushed forward, exerting tremendous pressure on the opponent. The Brazilians besieged the opponent’s penalty area and constantly threatened their goal. The Serbian national team looked helpless in the second half and only defended, but with such a game, of course, the Serbians could not avoid a missed ball. Finally, after several dangerous attacks, during one of which Sandro’s powerful shot deflected the ball off the post, the Brazilians managed to turn their total advantage into a goal. In the 62nd minute, the goal was scored by Richarlison, who was in the right place at the right time. After Vinicius’ shot, the ball was pushed back by the Serbian goalkeeper, and Richarlison, who reached it, calmly scored the empty goal.

After the goal, the Brazilian team increased the advantage even more. dangerous attacks followed one after another in the direction of the Serbian gate. In the 73rd minute, the already wonderful game of the Brazilians was decorated by the same Richarlison with his fantastic goal. After a brilliant pass by Vinicius from the left side of the attack, Risharlison handled the ball wonderfully and with a half-turn shot, he brought the opponent’s defenders and the goalkeeper to their knees, 2-0.

Brazil did not rest even after the second goal and constantly attacked with great desire. In one of the episodes, after Casemiro’s beautiful shot from a distance, the goal post came to the rescue of the Serbs once again, and the goalkeeper of the Serbian national team saved his team several times. At the end of the game, Brazil calmly finished the match. The game ended with a confident and beautiful victory of Brazil with a score of 2-0.

The teams of Brazil and Switzerland lead the table of group G with 3 points each. The teams of Cameroon and Serbia have no points.

Dillon and Bove, with teams defined for a Sunday where winning is the priority

“Umnichka. God forbid a good birth”, “Pregnant? Good luck to you.” The network is discussing the image of 47-year-old Mogilevskaya in a free-cut outfit

Four super powerful seeds that you can add to your diet