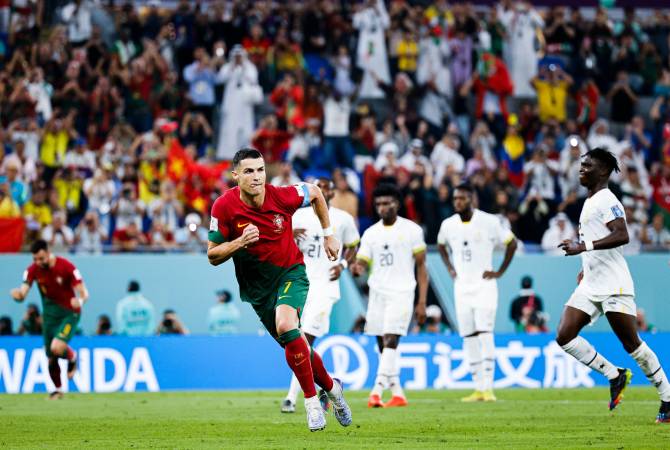 YEREVAN, NOVEMBER 24, ARMENPRESS. Within the framework of the first round of the World Cup 2022 group stage, the second match of Group H took place, in which the teams of Portugal and Ghana competed against each other.

The beginning of the second half also continued in the same scenario, it was almost an equal game on the field, but in the middle of the half, Portugal got a great chance to score a goal. Cristiano Ronaldo, the forward of the Portuguese national team, won a penalty kick for his team in the 65th minute. It was Ronaldo who scored the penalty, opening the score of the game with a sharp shot. The joy of the Portuguese was short-lived, however, as the Ghanaian team equalized shortly after. In the 73rd minute, Andre Ayu ended the attack organized by his teammates with an effective shot.

In this case, the joy of Ghana did not last long, because the Portuguese team responded with their own goal 5 minutes later. Joao Felix scored a goal in the 78th minute after Bruno Fernandez’s pass. Ghana did not have time to come to their senses when the Portuguese sent the third ball into the opponent’s goal. In the 80th minute, Bruno Fernandez’s pass was effectively used this time by Rafael Leau, 3-1.

When it seemed that the outcome of the game was already decided and everything would end like this, the Ghanaian team managed to bring back one goal. Osman Bukari scored a goal in the 88th minute. The referee added 9 minutes to the regular time, creating a chance for Ghana to save the game, but there were no new changes in the score for the rest of the period. At the end of the game, however, Ghana could have secured a heroic finish. The goalkeeper of the Portuguese team, Diogo Costa, after thwarting another opponent’s attack and taking possession of the ball, did not notice that there was an opponent’s football player behind him and put it on the ground to play the ball with his teammates. after which the defenders of the Portuguese national team stepped in and saved the situation, at the same time providing a very dangerous counterattack for the Portuguese national team. The Portuguese did not use their chance either. the game ended like this: Portugal-Ghana: 3-2.

By the way, Cristiano Ronaldo set a new record in this game. He became the first football player to score in 5 World Cups. With this indicator, Ronaldo overtook Pele, Uwe Zeller and Miroslav Klose, who stood out in 4 World Championships.

After this match, Group H is the sole leader of the Portuguese team with 3 points. The teams of Uruguay and South Korea, who ended the game with a goalless draw, have 1 point each, and Ghana finishes the table with 0 points.

In any country of the world, the budget does not have the opportunity to include all wishes. prime minister

Is it better to train on the weekend or several times during the week?

St. Hripsime Church in Kapan will be restored