Who said “preventive war is okay”? 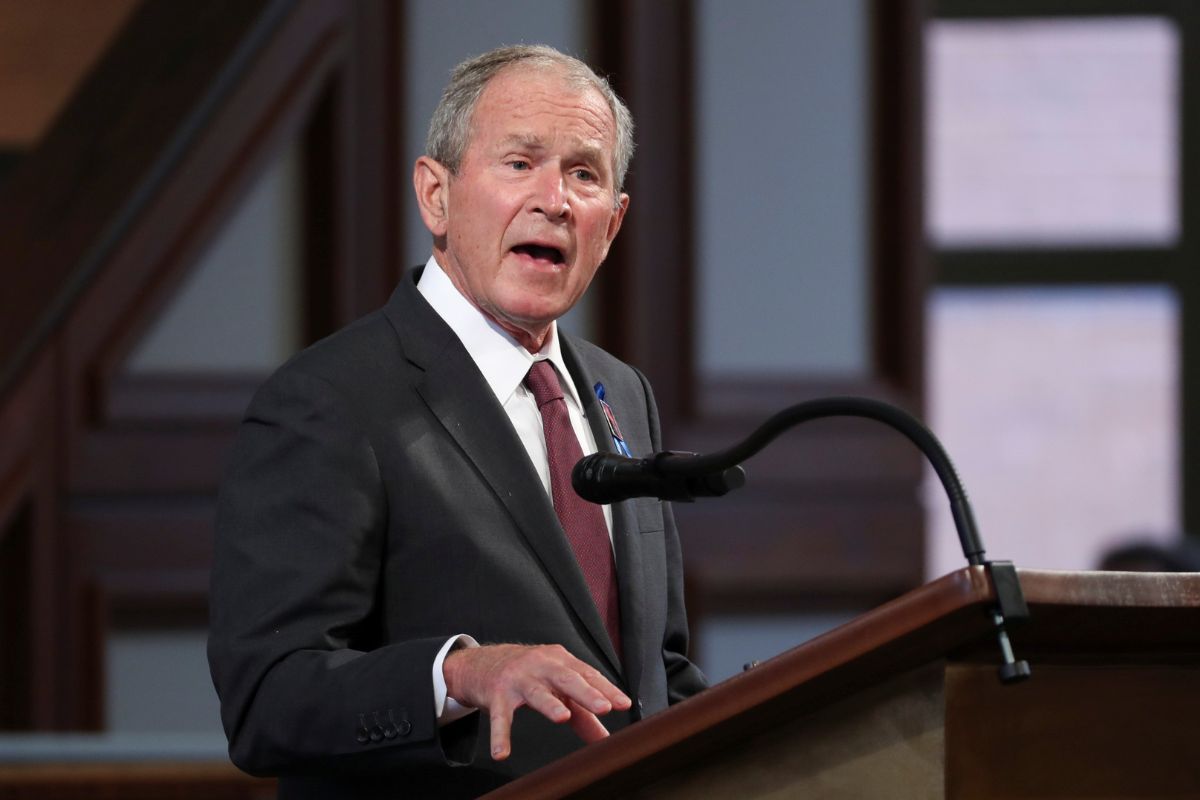 
I love the rhetorical tricks of our NATO propagandists. Especially those based on purely legal formalism: “Russia attacked Ukraine, not the other way around. So, Russia is the aggressor. That’s why we have to impose sanctions on her.”

That would be the same as asking who attacked whom on September 3, 1939. Because Nazi Germany did not declare war on England and France, but vice versa. So, according to the logic of our compadres, Germany is the victim, we have to be on Hitler’s side.

The norm of “anticipatory” or “preemptive” self-defense was legitimized by Bush Jr. in 2002 (the so-called The Bush Doctrine). “We cannot defend America and our friends by (waiting and) hoping for the best,” Bush announced at West Point. “If we wait for the threats to fully materialize, we will be waiting too long. […] We have to fight the enemy, disrupt his plans and face the worst threats before they appear. […] We have to be ready for preventive action whenever it is necessary to defend our freedom and to defend our lives” (nav. here).

After that, in the security report to Congress, Bush repeated that the greatest danger for the USA “lies at the intersection of radicalism and technology”, which is why “for the sake of common sense and self-defense, America will act against such emerging threats before but they are fully formed”. Simply, “we cannot allow our enemies to strike first” (also).

True, says Bush, “international jurists often conditioned the legitimacy of pre-emption on the existence of an immediate threat – most often the visible mobilization of the army, navy and air force ready to attack”. However, he says, “we have to adapt the concept of immediate threat to the capabilities and goals of today’s adversaries.” […] The greater the threat, the greater the risk of inaction – and the more compelling the case for action anticipatory actions to defend ourselves, even if uncertainty remains as to the time and place of enemy attacks. In order to prevent or disable such hostile acts of our adversaries, the USA will, if necessary, act pre-emptively” (same).

In the 2006 National Security Strategy of Bush doctrine of predestination (doctrine of pre-emption) has grown into a key element: “We choose to deal with challenges now, instead of leaving them to future generations. We fight the enemy abroad instead of waiting for them to arrive in our country. […] We do not rule out the use of force before an attack occurs, even if there is uncertainty as to the time and place of an enemy strike. When the consequences of a WMD attack are potentially so devastating, we cannot afford to stand idly by while grave dangers materialize. This is principle and logic prevention” (also).

The British and Australians supported the Bush doctrine in everything. Blair said that “we need to learn to […] when a threat or danger appears, we have to suppress it before than it materializes, not after that” (here).

And the Australian Prime Minister John Howard said: “If you believe that someone is going to attack your country, and you had the opportunity to stop it and there was no other way but to use those opportunities, then of course you would have to do it” (here).

Gary Simpson, Professor of Public International Law at LSE, explains that the great powers were given special rights by the founding Charter of the UN – for example, the right of veto in the Security Council. “Just as they have special prerogatives based on the Charter, the five permanent members of the SB acquire such prerogatives outside the framework of the Charter”, and above all “the right to (anticipatory – SA) self-defense”. (here 357).

Even before the Ukrainian war, Simpson claimed that we were witnessing a transition “from Charter-based hegemony to regional hegemony” (236), thus renewing the old idea of ​​”alternative regimes […] several relatively autonomous security mechanisms” (344).

Apparently, it resembles the order before 1989, when the USSR militarily intervened in its region (Eastern Europe and Central Asia – The Brezhnev Doctrine), and the USA in its (North and South America – The Monroe Doctrine). But the difference is that interventions in this new international order must be motivated a real security threat – not for ideological or economic reasons.

And was Russia really under security threat, so it had to act preventively? There are four reasons for this.

First, Ukraine has been announcing for a long time that it is going to get nuclear weapons. For example, Andrey Melnyk, the Ukrainian ambassador to Germany, warned on April 15, 2021 that Kyiv could acquire nuclear weapons if NATO does not accept them as a member: “Either we will be part of an alliance like NATO and also contribute to the strengthening of Europe, or we have only one option left – to arm ourselves again (nuclearly)” (here).

Five days before Russia’s intervention, Ukrainian President Zelensky officially announced that if Ukraine is not admitted to NATO, it will consider the Budapest Agreement (1994; official text) null and void here), and will begin the renewal of nuclear weapons: “I am launching consultations within the framework of the Budapest memorandum,” said Zelenski. “The Minister of Foreign Affairs was tasked to convene them (the guarantor states). If they do not respond or the results of the consultation do not guarantee security for our country, Ukraine will have every right to believe that the Budapest Memorandum does not work and that all the package decisions from 1994 are questionable” (here). And the key point of the Budapest agreement is precisely the prohibition of nuclear armament of Ukraine.

Serbian lawyers immediately noticed this moment of real danger for Russia, calling it “more than evident”. Namely, due to “the arming of the hostile Ukrainian army with weapons that can threaten the Russian Federation itself”, they assessed, “conceptions are applicable to such situations preventive and preemptive war” (here).

Second, Ukraine systematically violated the “Minsk 1” peace agreements (2014; official content here) and “Minsk 2” (2015; official content here), one of whose signatories was Russia. Therefore, the DNR and LNR perished in the military attacks on the Russian population thousands of civiliansand in 2021 the President of Russia assessed that the actions of the Ukrainian army against Russian civilians in the Donbass it has the characteristics of genocide. And we know that the prevention of the (alleged) genocide against the Kosmet Albanians was for NATO a legitimate reason for the attack on the FRY in 1999 (here 284-287).

Later, Petar Poroshenko, the president of Ukraine at the time of “Minska 1” and “Minska 2”, said that Ukraine had no intention of complying with these agreements at all, and that it only wanted to buy time in order to better arm itself (here).

Thirdly, at the beginning of 2022, Ukraine grouped the army on the borders of DNR and LNR, preparing a general military attack on these republics with Russian population (here, here and here), with the ultimate goal of his deportation to Russia. Such developments directly threatened Russian security.

And fourth, official Ukraine developed a malignant anti-Russian ideology, turning into a kind of Anti-Russia. The fanaticism of that ideology was clearly visible immediately after the outbreak of the war, for example, in the statement of the host of “Kanal 24”, who called for the killing of Russian children (here), or in the statement of the Ukrainian ambassador to Kazakhstan, who said of the Russians: “We are trying to kill them as much as possible. The more Russians we kill now, the less our children will have to kill” (here).

In combination with nuclear weapons, that is, with the requested entry into NATO, such an ideology of hatred meant an existential danger for Russia. This is precisely what the Russian president emphasized when announcing the decision on the special military operation:

“The problem is that in the neighboring territories – our historical territories – a hostile ‘anti-Russia’ (anti-Russia) is emerging, which has been placed under complete external control and is rapidly being filled with the armed forces of NATO countries and pumped up (nakachivaetsya) with the most modern weapons . […] Russia’s confrontation with these forces is inevitable. […] Now they also aspire to get nuclear weapons. […] For our country, it is a matter of life and death. […] This is exactly the red line we have talked about more than once. They crossed it” (here).

So, the Americans legitimized a preventive war due to essentially threatened security, and the Russians only applied this (new) norm of international law to their case. Of course, Washington thought that this norm applied only to him. But once you set a precedent, as in the case of Kosovo, you cannot prevent other international actors from referring to it.

Conceited grandeur and arrogance have come to pay. When he preached a preventive war, the USA thought “quod licet Iovi, non licet bovi” – where he saw himself as Jupiter and the other countries as oxen. This is how the international order (from 1945) was shaken and destroyed.

Now he has Jupiter and oxen.

Cover photo: Ministry of Defense of the Russian Federation

Without an artificial dune, the next storm can be fatal according to Ada Bojan

Lavrov said that the Russian Federation is ready for negotiations with Ukraine “on a wider range of issues”, but this does not depend on Moscow

Covid-19 pandemic: Report from the Ministry of Public Health has contradictions

Boxing: beaten by Yordenis Ugas, Manny Pacquaio maintains the suspense over his future

Walter Queijeiro assured that Chanchi Estévez was his worst partner in The Hotel of the Famous: “He did not speak to me”