‘We’re in California’? Earthquakes in RN ’cause’ on Twitter 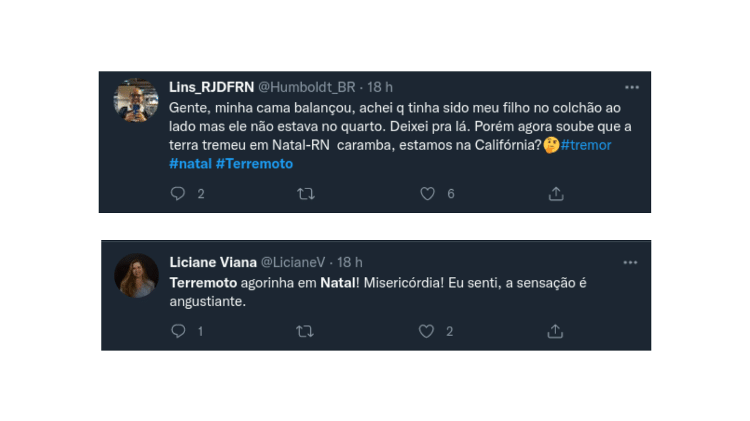 
The earthquakes recorded this Sunday (31), in Rio Grande do Norte, by the Seismology Laboratory of UFRN (Federal University of Rio Grande do Norte), were one of the most talked about subjects on the networks in the last 24 hours.

Opinions are divided as to the impact caused by the phenomena. Some say the scare was great. On the other hand, some residents didn’t even feel the earth shake.

Many netizens felt the tremors and made posts and comments about the scare they took.

The epicenter of the tremor occurred in the Atlantic Ocean, being felt in the capital Natal and some cities on the north coast. The first tremor of 2.4 mR (Brazilian regional magnitude) occurred at 0:34 am. The second, of 3.7 mR, occurred at 16:05.

Earthquake in Natal City.
I went, I was! pic.twitter.com/Igg6kPG5hO

“And this earthquake in Natal? One more for the bill. Natal wanting to do a big event with rain and earthquake. You can’t take it, no, city”, commented an internet user.

Coincidence, the 25/07th was 1 year of another tremor around here. Print of you saved at the time. # tremor #Christmas #earthquake #Christmasearthquake pic.twitter.com/a5wgiNBBqA

“Earthquake just now in Natal. Mercy. I felt it, the feeling is distressing,” wrote another. “Guys, my bed shook, I thought it was my son on the mattress next to him, but he wasn’t in the room. I let it go. But now I know that the earth shook in Natal. Damn, are we in California?”, wrote a third. .

“This earthquake story in Natal is fake. No earthquake was recorded here by the USGS (United States Geological Service)”, posted an internet user, publishing a print that shows the absence of records of earthquakes in Brazil by the US agency. .

At the site gives USGS there is no record of earthquakes felt in Brazil this Sunday. But there is an explanation: this could happen because earthquakes that occur outside the US and with an intensity less than magnitude 4.5 on the Richter scale are difficult for the USGS locate if there is not enough data.

This earthquake story in Natal is fake. No earthquakes have been recorded here by the USGS pic.twitter.com/Sy7M6uObOn

SRFTI Recruitment 2022: Vacancy in many posts including assistant professor out here, salary will be more than 1 lakh, apply soon

He attacked his partner with blows and with a knife because he did not want to give him money: he will go to prison

Kovid infection may increase the risk of Parkinson’s disease

The RA government has adopted an ambitious environmental agenda. environment minister at the regional meeting