War in Ukraine: festivities, “voluminous” speeches… how Putin is preparing to announce the annexation of Ukrainian territories 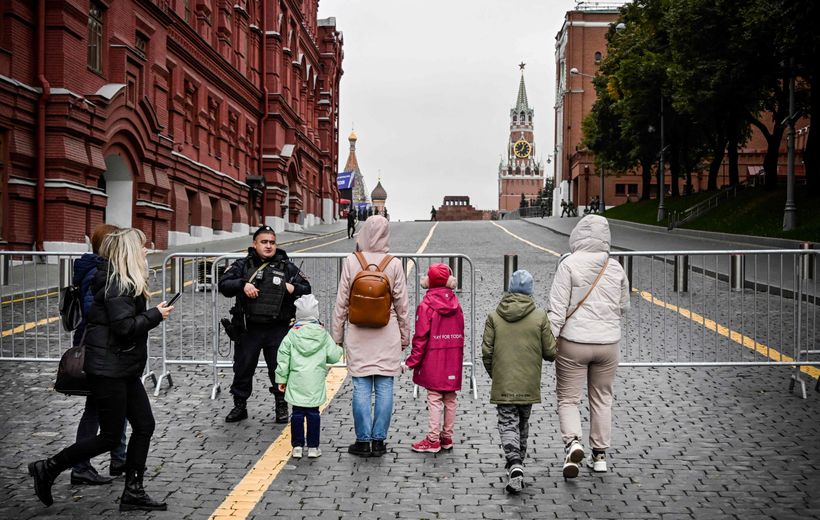 
the essential
The Kremlin is hosting a big ceremony on Friday, September 29 to celebrate the annexation of the Ukrainian regions of Donetsk, Lugansk (east), Kherson and Zaporijjia (south).

Russian President Vladimir Putin will formalize, Friday, September 29, in Moscow, the annexation by Russia of Ukrainian territories, widely denounced by the international community but which he threatened to defend even with nuclear weapons.

kyiv, supported by the West and its arms deliveries, has sworn to continue its counter-offensive which has been pushing the Russian army back for almost a month, forcing Vladimir Putin to hastily mobilize hundreds of thousands of civilian reservists.

Read also :
DECRYPTION. War in Ukraine: who benefits from the sabotage of the Nord Stream gas pipelines? An expert analyzes its consequences

The Kremlin will therefore host a ceremony on Friday during which the annexation of the Ukrainian regions of Donetsk and Lugansk (east) and Kherson and Zaporizhia (south) will be formalized. “A ceremony for the signing of agreements on the entry of new territories into the Russian Federation will be held tomorrow at 3 p.m. (Editor’s note: 2 p.m. in France) in the Kremlin,” the spokesman for the presidency told the press. Russian, Dmitry Peskov. “Vladimir Putin will deliver a voluminous speech at this event,” he added.

The red square is preparing for the “festivities”.

Putin’s speech is scheduled for tomorrow at 3 a.m. in Moscow. Most likely to announce the “annexation” of Ukrainian regions.

In a few months, we will have gone from “We must denazify Ukraine” to “It’s at home” pic.twitter.com/EQOLqteIEa

The Russian capital was preparing for festivities to mark the annexation of the four Ukrainian regions, which comes after “referendums” condemned by most of the international community. Motor traffic will thus be prohibited in a large part of the city center on Friday, while a concert will be organized, according to Russian media, in the shadow of the Kremlin walls. Vladimir Putin could make an appearance there.

Officials installed by Moscow in the regions of Donetsk, Lugansk, Zaporizhia and Kherson have already arrived by plane in Moscow on Wednesday evening, according to Russian news agencies.

Faced with a massive Ukrainian counter-offensive, Russia accelerated the annexation process with the hasty organization of so-called “referendums” under the supervision of armed soldiers. These votes have been called a “masquerade” and “simulacra” by kyiv and its Western backers. Even China, Moscow’s closest partner, has been critical of a violation of the territorial integrity of a sovereign state.

Russia is following the scenario of the annexation in 2014 of Crimea, a peninsula in southern Ukraine: Vladimir Putin then also delivered a speech with great pomp under the golds of the Kremlin. Ukraine has denounced these annexations and swept aside Vladimir Putin’s threats to use nuclear weapons, pursuing a counter-offensive in the East and South.

Read also :
DECRYPTION. War in Ukraine: annexation referendums are “a ruse of war and an unacceptable escalation in the conflict”

1992-2001: the events that marked the last decade of the twentieth century

Yes or not? Now the WHO says it is not known if asymptomatic people can spread the coronavirus