“Waiting for more.” Georgian Foreign Ministry reacted to the decision of the European Commission on the country’s application for EU membership 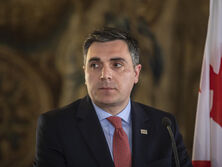 Georgia “expected more” from the European Commission, which on June 17 recognized the European perspective of the country, but so far has not recommended granting it the status of a candidate for EU membership. This was stated by the Minister of Foreign Affairs of the country Ilya Darchiashvili, the agency writes. “News-Georgia”.

“Indeed, on the basis of the efforts of Georgia and the reforms carried out, we expected more, but it is important that today the European Union openly recorded the decision to open a European perspective for Georgia,” he said.

The minister stated that The practice of granting the status of a candidate member of the EU after fulfilling a number of conditions is not new for the EU, and the Baltic countries, in particular, had a similar experience. He added that Georgia will continue to implement the reforms on which it has agreements with the EU.

“In accordance with the ambitious reform program, we will definitely lead Georgia to its ultimate goal, which is the full membership of our country in the European Union,” the Foreign Minister said.

Ukraine has created a Coordinating Headquarters to protect the rights of the deported, it will be headed by Vereshchuk

Rating: How did Ángel de Brito fare in front of ‘LAM’?

YOUR DAUGHTER WAS IN BUJANOVAC AND THE TURKISH PRISON Dalila’s father spoke out after the accusations of Aleksandra’s mother, the war continues

The Cabinet of Ministers of Ukraine approved the new cost of Naftogaz, the company transferred a number of facilities