VIDEO. Parenthesis of peace for Ukrainian children in Ariège 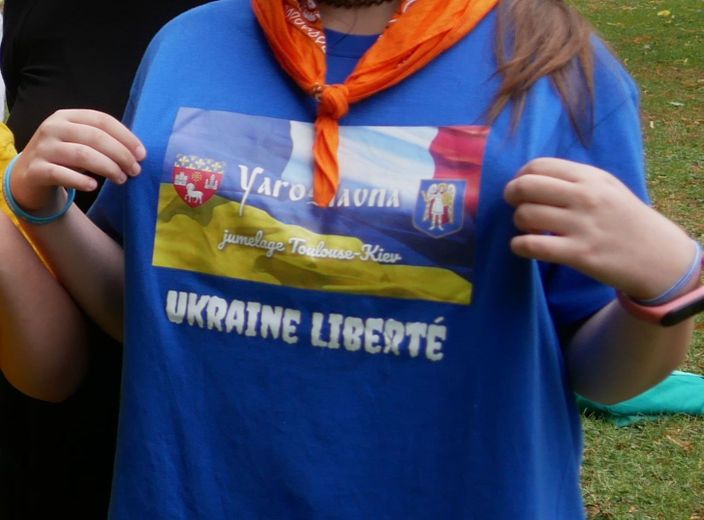 
the essential
Arrived on July 22 in France, 37 children from kyiv, Mariupol, Sloviansk, Severodonetsk, Kherson and Kharkiv are spending their holidays far from the war thanks to the Yaroslavna association and the city of Toulouse which welcome them.

At the foot of the Ariège mountain in the Aulus-les-Bains park, the youngest enjoy climbing and chasing around a portico. And the older ones rediscover their adolescence on a bench, the time for confidences.

They are from 8 to 16 years old, arrived on July 22 in Toulouse and during the welcome party which was organized the next day for them in Longages, each received two T-shirts for the holidays: one yellow, one blue. The Ukrainian and French colors blend there and the flocking sums up more than 30 years of friendship from the Garonne to the Dnieper, embodied by the Toulouse association “Yaroslavna Jumelage Toulouse-kyiv” (1). Impeccable, Tima is wearing yellow this afternoon.

The last time he came to Ariège was in 2019. Two years of Covid, later, the traditional reception of Ukrainian children by the town hall of Toulouse in one of its holiday centers was finally able to resume. … But the Russian invasion is now ravaging his country. “Ukraine Freedom” also proclaims all their Tshirts, now. “The war is terrible, we must stop it by all means, the international community must help us,” says Tima, in perfect French. Before finding with his friends the carelessness due to vacationers.

On a hike to the Cascade des Fées or perched in the trees for the tree climbing, nothing distinguishes them anymore, then, from the young people of Toulouse whose daily life they share. They laugh the same way at volleyball, love “disco” evenings and language is never an obstacle when you want to get along. The only nuance?

It may be that those of the Pink City make it a point of honor to pamper their guests, confides an adult. “We were very moved when they welcomed us with the drawings they had done for us,” says Irina, 14.

“The French are very nice”, “open”, “very beautiful, very interesting”, also, “the activities, it’s great”, then enthuses the group in a cascade of laughter, “enchanted by the mountain”. In terms of meals, it even touches on the marvelous, especially if there are “cordon bleus”, Irina still lights up. So.

But “be careful, fragile” also know their teachers who supervise them. “Most have nightmares and many react to the slightest noise,” confirms Viktoria, the psychologist. “We make sure that they cut with the news”, underlines Vera Grygorenko, French teacher in kyiv where “five alerts still sounded”, this Thursday, the massacre continuing elsewhere, under Russian fire.

For 22 years, Vera has accompanied the twinning. In recent weeks, she hasn’t slept much to be able to offer this escape to her students and to others, victims of the conflict. Until the last minute, with the president of Yaroslavna, Hugues Negretto, she had to fight to find a bus. A swarm of kids and teenagers descend on her to kiss her as soon as she appears, while the arms of her colleagues Irina and Marie multiply as there is so much to cuddle.

Children of kyiv, but also of Mariupol, Sloviansk, Kherson or Severodonetsk, martyred cities: each one carries his share of fears and tears recall certain glances having had to grow suddenly in the face of violence, but each also wants to testify.

Gravity of the faces, which shouldn’t be their age. The war… “There are no words for that. It is beyond fear and panic, new feelings that cannot be expressed. To discover that you can die without warning, that the rocket falls and that you no longer exist”, summarize then Katia, 12 years old, and her brother Vadim, 14 years old, whose village was attacked by Russian tanks.

Figure of a wise angel, Bogdan is not 15 years old and it is difficult to guess behind his shyness the Ukrainian Jiu-Jitsu champion. He now lives alone in Kropyvnytsky, in the center of the country since he left Kherson three months ago, after hiding in the cellar with his mother. A policeman, his father was called up in the army “from day one”. Today he is engaged somewhere near Kharkiv where his mother joined him, with no immediate hope of returning home to a destroyed city.

Kharkiv… “We left on March 3. My little sister couldn’t stand the explosions anymore,” continues Julie, 14, who was going to realize her dream, “to become a designer,” but who no longer has a school.

Three weeks in a cellar

“Tanks, rockets, planes, helicopters, three weeks in the basement in terrible cold,” rushes Dasha, 15, unable to forget the hunt for all men of fighting age by Russian soldiers in his occupied village of Ivankov. More bread. Only fish caught on site. “I will never be able to eat it again,” she adds, wanting to finish with a smile. Leaving kyiv for Toulouse, 14-year-old Diana came looking for “a cheerful atmosphere, nice people”. She has no news of her father, engaged on the battlefield of Severodonetsk, in the Donbass.

Holidays: parentheses torn from the war. “In my country I am sad, in France, I am gaining confidence. Everything is magical here, ”says her neighbor. But no one forgets the country. “The Ukrainians are suffering, they need everyone”: the message of the film they made in French, to be found on our site.

This item is reserved for subscribers
Subscribe to enjoy
from 1€/month, without commitment

I subscribe to read more Already a subscriber? Login

This item is reserved for subscribers
Subscribe with your Google account and
enjoy -50% on your subscription
4.95€/month
The first 12 months instead of €9.90 / month

Muse: the new album Will of the people will also be available in NFT