Victim of the crash in the Circunvalación breaks the silence: “They don’t believe I’m alive” Tania Zalazar speaks for the first time about the sinister road that claimed the life of the motorist who was driving the wrong way. 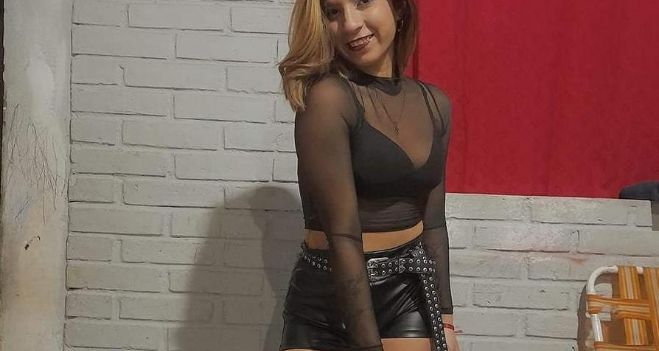 
She says that she remembers little, that watching the videos hurt her and that she continues to have severe pain throughout her body. But he admits it could have been a lot worse, for her and her friend, so he thanks God they’re alive. That’s the balance she does Tania Zalazar (20), survivor of the tragedy last Saturday on Avenida Circunvalación. She and her friend Emiliano Castro (21) can count it, but not Pablo Burgo de Vita (32), a driver who drove the wrong way until causing the head-on collision, who did not have the same luck and died practically on the spot.

Now a little calmer and in exclusive dialogue with DIARIO DE CUYO, Zalazar broke the silence this Thursday. It is the first time that he speaks openly about the fact, so at times he breaks down. “I am very grateful that I am alive, mainly to God”, maintains the girl from her house in Caucete, where she remains almost all the time at rest. She says that yesterday, Wednesday, they had to take her urgently to the hospital because “I couldn’t stand the pain”, that there they prescribed new painkillers and that now he feels much better. What afflicts her the most are the blows she suffered to her face, which caused her septum fracture. In addition, she has a sprain in her right foot and general pain. “The first three days I was in bed, I couldn’t walk because I had a lot of pain in my back and the rest of my body, I really couldn’t stand it. Now I am somewhat better, in the afternoon I go outside the house to get some fresh air. My neighbors and my friends come to see me because no one can believe that I am alive… it was a miracleeven the doctors told us that because the accident was terrible”, he expresses, with a lump in his throat.

Both she and her friend were discharged from Rawson Hospital that same Saturday, at night. That is, they remained hospitalized for only a few hours. Incredible, if one takes into account how violent the impact was, something that was evidenced in the vehicles, both destroyed after the crash, which occurred at 6:16 that day in the inner ring of the Circunvalación. “The only thing I remember is that when I turned my head, we already had the car on top of us. I remember that later a man came running and that a policeman hit me in the face and talked to me because I was unconscious, I was already fainting”, says the girl, who is studying Physical Education at the Catholic University. Her memory has several blanks that she cannot fill. “I don’t remember almost anything, I want to try to remember but I can’t. I don’t know when the ambulance arrived, I don’t know where I entered the hospital. I only remember when I was already on the stretcher with IV.”

Tania says that that moment when she woke up was terrible: “As soon as I opened my eyes, I felt a lot of anguish and sadness. At times I thought she was alone, she didn’t know my family was outside. I was holding my friend’s hand (Emiliano), I thought we were alone, me with him and him with me”. Until that moment, the boys were unaware that they had been part of an accident with a fatal victim: “We knew that we had had an accident but not how it had been, we tried to remember but we couldn’t”. After a while they found out about the deceased. “We heard rumors in the hospital and then the police came to ask us questions. That’s when we found out. We took it very badly because we did not understand anything, we did not remember anything. Then they told us to stay calm because it wasn’t our fault.”

“It is not understood why he had that action of going against it. May he rest in peace, but I don’t understand why he made that decision. If it wasn’t us it would be anyone else, but hey, unfortunately it was our turn ”, she later opined, very sorry, about what Burgo de Vita did.

In addition to emphasizing the “help of God”the young woman says that she should thank a boy who helped her when she was trapped inside the car, which was starting to catch fire: “My seatbelt was stuck and my friend couldn’t open his door. That person took us out. He took me below the beltI have cuts and scratches on my neck. If that person had not appeared, I would not be telling it here. He was an angel to me.”

What follows for Tania is to try to get well both physically and psychologically. This last point is difficult, so much so that she already suffers the first consequences. “When I saw the videos I didn’t fall, I cried a lot because I couldn’t believe it. Seeing the fire, seeing the photos of how the two cars turned out was shocking. Even yesterday I went to the center and when I was in the car I held my mom’s hand tight because I was very scared ”, she closed, hoping that she will be able to overcome all this nightmare.

[ACCIDENTE EN CIRCUNVALACIÓN]
The moments after the collision between the car that was driving the wrong way and the fire in the other vehicle after the impact. pic.twitter.com/l4awZkQdMX

The misfortune occurred at 6:16 on Saturday, in the Capital, in the inner ring of the Circunvalación, about 50 meters east of Tucumán street. According to the records of the security cameras, Pablo Burgo de Vita entered the Circunvalación with his Volkswagen Gol for the ascent of Scalabrini Ortiz. His gait was correct, in fact he did a long stretch until he left the ring down the slope towards Tucumán. What the inquiries do not explain is why, after crossing that street, it went back up towards the Circunvalación, much less why, instead of continuing in the same direction, it made a 45-degree turn to the left, entering the avenue in the opposite direction. , heading west.

Burgo did approximately 200 meters in the opposite direction until his wrong direction had a tragic consequence. It was when he came face to face with a Fiat Idea driven by Emiliano Castro (21), who was accompanied by Tania Zalazar (20), both residing in Caucete. The impact was frontal, violent and fatal for the driver of the Gol, whose body was trapped in the vehicle, without any chance. In his car they found alcoholic beverages and marijuana.

tragedy on the ring road

The day Valiente's term was fulfilled, it turned out that Sportivo requested another extension

ZPMK, a part of GeoProMining, tripled the tax revenues to the state budget of Armenia

The 39th session of the unified collegium of customs services of EAEU countries was held in Moscow. 19 decisions were signed

Increased frequency of cases of covid reinfections since Omicron