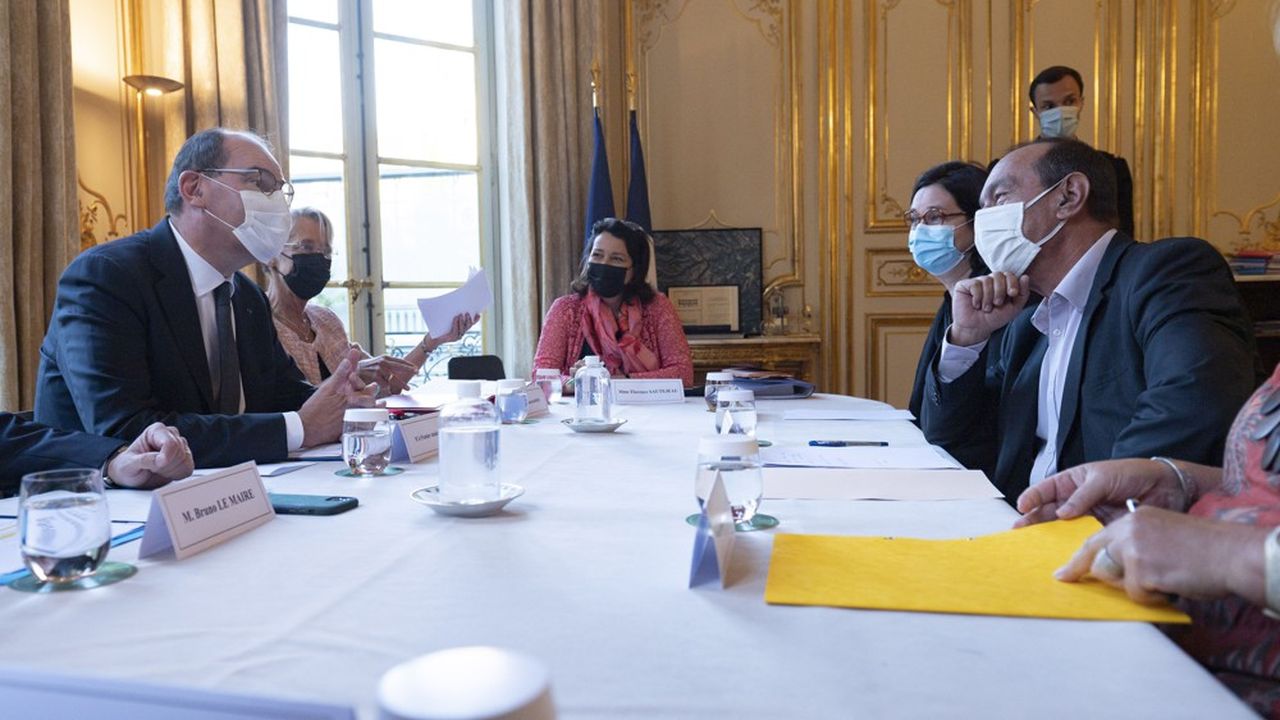 
A month ago, the Prime Minister received the social partners one by one to discuss the issue of purchasing power and wages, and the surge in inflation caused by energy prices.

Radical change of climate for the new meeting given by Jean Castex to the employers’ and union leaders, this time together, this Tuesday at the end of the afternoon. Less than two weeks after the start of the war in Ukraine, we are talking about the “resilience plan” announced by Emmanuel Macron during his televised speech last Wednesday.

Beyond the dread of seeing the war reappear in Europe, the unions want to insist on its consequences on purchasing power. “This situation amplifies the inflation which was already affecting employees first and foremost,” underlines Yves Veyrier, secretary general of Force Ouvrière concerned. He regrets that his request for a boost to the minimum wage was not heard by the government. The leader of FO calls for the extension of the tariff shield, by extending it “to everyday consumer products”. Otherwise, “the situation will quickly become unbearable” for households, he warns.

Laurent Berger, secretary general of the CFDT, insists particularly on the repercussion of the rise in the cost of energy, “in particular on the private individuals except regulated tariffs” and on the employees who must take their car to go to work. He calls for targeted “purchasing power measures”, calling on “companies to play the game with state support”.

Philippe Martinez, the leader of the CGT, “hopes that we will also talk about the situation of employees in Ukraine and Russia, in particular those who work for French multinationals”, expatriates and local employees. “Companies have announced that they will repatriate Ukrainian employees and make them work in their French factories: what status will they have, will they replace temporary workers? he wonders. Regretting that staff representatives are “little informed by management”, he also mentions the issue of partial unemployment in the event of a supply problem.

Do not forget the subcontractors

Everyone is worried about the impact that the war will have on the economic situation. “Day after day, we discover new impacted sectors,” said one of them. The employers’ organizations have already cleared the subject with the Minister of the Economy Bruno Le Maire. “As for the Medef, we want the executive to continue to cushion the rise in energy prices for businesses and households”, declared to “Echos” the number two of the Medef, Patrick Martin, there a few days.

“You have companies where the energy bill already exceeds the results of the previous year”, warns François Asselin, the president of the CPME. “Energy-intensive” activities, for example the food industry, with its industrial ovens or extruders in the plastics industry, “risk no longer being profitable, he insists, pleading to work on aid based on the weight of the expenditure of ‘energy in the cost price or the result of 2021’.

It also calls for anticipating possible shortages of raw materials by helping companies to position themselves before others on substitute products: “To do this, we are asking that the repayable advances announced by Bruno Le Maire in mid-December”. He also mentions the need to work on the sectors, so as not to forget the subcontractors who have accompanied the large companies in Ukraine or Russia.

Marcel Cerdan or Jean-Claude Bouttier went there before Tony Yoka: Roland-Garros and boxing, an old story

HARVEST March 10, 2022, 02:11 a.m. The National Harvest Festival will be celebrated in Las Piedras with various proposals

2154 procurement procedure invitations were monitored. In 96 cases, inconsistencies with legal regulations were recorded

Osteoporosis, the silent disease; Do not ignore these symptoms and seek treatment

Can asymptomatic people spread the disease? Is monkeypox in the community transmission phase?