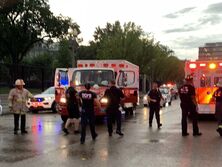 Near the residence of the President of the United States in Washington on August 5, as a result of a lightning strike, there are victims and injured. This is reported AP with reference to the police department of the American capital.

A married couple died – James and Donna Mueller, who, according to the agency, came to the capital from Wisconsin for their 56th wedding anniversary.

The report says that they received injuries incompatible with life in Lafayette Park, directly outside the White House.

The other two, a man and a woman, are in critical condition and their names have not been released.

“We are saddened by the tragic loss of life following a lightning strike in Lafayette Park. Our hearts are with the families who have lost loved ones, and we pray for those who are still fighting for their lives,” said White House Press Secretary Karine Jean-Pierre.

They develop drug against coronavirus 80 times more effective than remdesivir

Senior footballers will get the ball rolling

AS IN THE ONCE, David Dragojević admitted how glad he was that the family was together again, and revealed whether Alex would also go to Veternik with them

Covid 19 situation/ Ministry of Health: 671 citizens infected and no loss of life in the last 24 hours