Two "gifts" del Venezia, Sampodoria thanks and returns home with the 3 points 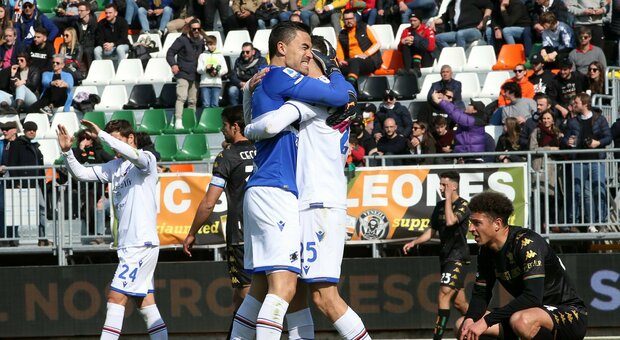 VENICE – Few emotions at Penzo, in a match conditioned by the fear of losing, and in the end lost by Venezia 0-2 with Samp. What makes the difference between the hosts and the Sampdoria is the “head”, and the Ligurians are more accustomed to Serie A than the lagoons. With the specter of relegation for both, to carry on are the Dorians, strong with two gifts from the lagoon. Decisive on both occasions Sabiri, who attacks the defense putting further pressure especially on Ceccaroni, in obvious difficulty. The first half ends with the guests ahead for two goals to zero. The early stages of the game do not offer much to the spectators, while it is from the stands that the cheering makes itself felt, with supporting choirs on both sides. The turning point arrives at 24 ‘with the first gift del Venezia: Ceccaroni unloads back on Maenpaa, the goalkeeper keeps the ball in the area moving to the right and does not notice that behind him Sabiri is ready to intervene in a slide. So the ball reaches Caputo, and the bomber only has to lay flat on an empty goal. Fourteen minutes later, Venezia offers another “chocolate” to Sampdoria, and a bomber like Caputo does not let himself be caught unprepared: Ceccaroni always proposes to Fiordilino, who however is marked, Sabiri enters the area, unloading the heel for Sensi, the new signing from the ‘Inter kicks with a sure shot, Maenpaa does not hold back and the ball rolls on Caputo, opportunist in anticipating Caldara and supporting the goal.

After the interval the guests return to the field with the awareness of the advantage, and do not go beyond the homework, while the Venezia tries to sink, arriving only once in the shot on goal in the whole match. At the 5th episode from Var due to a contact between Okereke and Thorsby, the Nigerian remains on the ground for a couple of minutes, but in the restart it is Sampdoria, with Caputo skipping Caldara and Ceccaroni putting a piece of it. Whirlwind of substitutions on both sides until the 41st minute, when Henry protests a little too much and is sent off by Orsato for a double yellow card (both for a few too many words). Zanetti waits for the Frenchman and takes him head on, shouting “You must shut up.” At the end of the umpteenth gift from Venezia almost concedes the net to Sabiri: Ceccaroni still unloading towards the goalkeeper, the Dorian tip intervenes and fails to pierce the lagoon net. A minute later it is Caldara who slips and gives the keys to the area to Caputo, who, however, shoots high.

Gasoline cut of 25 cents displeases everyone. Prices under 2 euros already on Tuesday?

José Luis Espert pointed out against Guzmán: “Only in a government of drugged apes can he be Minister of Economy”

OFFICIAL FORMATIONS / Today is decided the Serie A champion, the starters in the matches of Inter and Milan