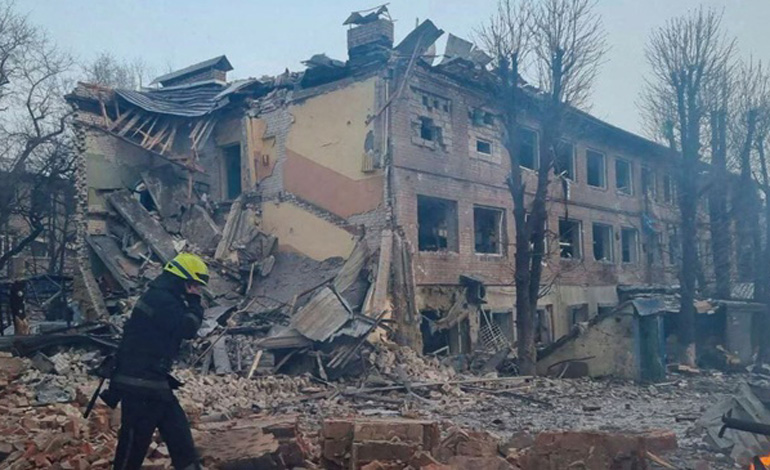 
An international commentary on the international situation, dominated by Russia’s war against Ukraine; and a comment related to the Venezuelan situation.

Russia’s war against Ukraine continues. International concern over Russia’s armed aggression against Ukraine continues, bombings of cities continue, civilian casualties and infrastructure destruction increase, more than three million Ukrainians have already taken refuge in neighboring countries, and the crisis worsens humanitarian, notwithstanding the rounds of negotiations that are taking place between the two countries. Given this circumstance, the British Foreign Minister, Liz Truss, in an interview with The Times newspaper, said that “no serious proposal (by Russia) was on the table” and that she feared “that the negotiation just be a new attempt to distract and create a smoke screen.

Switzerland, a historically neutral country, has declared, in the voice of its president, Ignacio Cassis, that “February 24 changed the face of the world, and not in the best way (…) this war is driven by a devastating madness that makes shattered all the principles and values ​​of our civilization (…) Russia has massively violated the prohibition of the use of force, a principle anchored in international law. Had it remained inactive, Switzerland would have played the aggressor’s game.”

For its part, the International Court of Justice (ICJ) ordered Russia to “immediately suspend military operations” in Ukraine, but compliance with that order depends on Russia’s will, and if Ukraine resorts to the United Nations Security Council United, Russia can use its veto power to block any initiative.

Chinese President Xi Jinping, in a video call with US President Joe Biden, cautiously said that “as permanent members of the UN Security Council and the world’s top two economies, we must not only guide relations between China and the United States on the right path, but also shoulder our share of international responsibilities and work for world peace and tranquility,” adding that “the Ukraine crisis is not something we wish to see.”

None of this has served to moderate Russian President Vladimir Putin, who, on March 18 in a Moscow stadium, gave a speech that was a kind of ode to cynicism and impudence, citing the Bible to justify the so-called “operation special military” that Russia initiated on February 24 against Ukraine, while celebrating the eighth anniversary of the annexation of the Crimean peninsula, manu militari and subsequent controlled referendum, in 2014.

Pope Francis, from Saint Peter’s Square in Rome, has raised a plea to the international community, in these terms: “The violent aggression against Ukraine does not stop, a senseless massacre where atrocities are repeated every day and there is no justification for this.” . I plead with the actors of the international community to make a commitment to stop this disgusting war.”

The Venezuelan situation. The dictatorial regime of Nicolás Maduro maintains its support for Putin unscathed, despite the world’s rejection of him for believing himself to be a new czar of Russia, and despite, as the prominent internationalist Elsa Cardozo has pointed out, that the sanctions imposed on Russia for its The invasion of Ukraine greatly affects Venezuela for the financial flow, for arrangements, to evade sanctions and to be able to put oil in other markets.

In the United States, there is a firm bipartisan Democratic-Republican consensus on the policy towards Venezuela: the sanctions are maintained with the passage from the Trump government to that of Biden, and rather Biden has adopted new sanctions, considering the Maduro government as a government of de facto, without legitimacy of origin and without legitimacy of performance, which has massacred the rule of law. The meeting, on March 5, of a high-level United States delegation with the Maduro regime, as I mentioned in the previous article, had as its main objective to seek the release of all Americans detained in Venezuela, which is succeeded for two of them. The White House adviser for Latin America, Juan González, after the interview, confirmed that the pressure on the Maduro regime can only be “relieved” if “concrete steps are taken to restore democracy in the country.” It should also be noted that the UN Fact-Finding Mission decided that not only the perpetrators of human rights violations should be investigated, but that the investigation should extend to the chain of command of those responsible for such violations.

As if all of the above were not enough, this dictatorship that afflicts Venezuela is accused of participating in drug trafficking and crimes against humanity before several international institutions, including the UN and the International Criminal Court.

Regarding the country’s economic situation, the economist Luis Crespo, in statements dated March 18 to El Noticiero Digital, said: “We have just had a pulverized minimum wage of 1.7 dollars, and with this salary adjustment the workers go from misery to extreme poverty. If we use the WB (World Bank) criterion as a reference, which establishes that workers who earn 1.9 dollars a day are in the extreme poverty belt, this definition perfectly allows us to describe what Venezuelan workers experience: pulverized wages that affect their life conditions”. The new salary went to 29 dollars a month, and 39 dollars with basket-ticket. According to the Center for Documentation and Social Analysis of the Venezuelan Federation of Teachers (Cendas-FVM), the single food basket – not the basic basket that also includes services – average Venezuelans is around 448 dollars; For this reason, private companies increasingly pay their employees in dollars to the point that at the beginning of the year (2022) 71% of salaries in private companies in Caracas are paid in foreign currency. Crespo added that “if the food basket is reviewed, whether it is from Cendas or OVF, we notice that the purchasing power of that salary is barely 7-8%”, and he asked himself “who can live with 29 dollars a month? ?”. We continue to have the highest inflation in the world, despite the fact that the BCV made official in December 2021 the end of a four-year hyperinflationary cycle.

What chavomadurismo is offering us in its more than four decades of rigged and apocalyptic exercise of power, could not be more reprehensible: an international policy dictated from abroad by authoritarian ventriloquists and a national policy that spells the word failure every day.

Analía Franchín spoke of a disorder that has haunted her since childhood: “It violates me…” Shows April 24, 2022 The panelist recounted all her OCDs and confessed that she has suffered from them since she was a child.

The war in Ukraine: What can upset the balance?

We will cut the powers of the President: the Prime Minister of Sri Lanka

Incredible story, the dentist removes 90% of the stomach to achieve the ideal weight: 1 year and a half I lived only on fruit juices

With one foot out, the first 2 departures from PARTIZANI

New attack in the US: At least three people were injured when stabbed in a hospital