Trade and economic relations between Armenia and Ukraine have a great potential for development. Mher Grigoryan 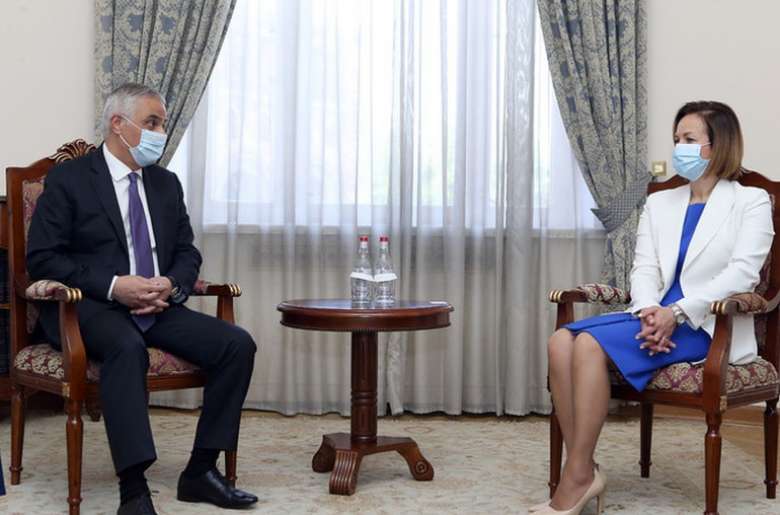 Deputy Prime Minister Mher Grigoryan received the Co-Chairs of the Armenian-Ukrainian Joint Intergovernmental Commission on Economic Cooperation, Minister of Social Policy of Ukraine Marina Lazebna, who arrived in Armenia to participate in the 8th sitting of the Commission; The meeting was also attended by the Ambassador of Ukraine to the Republic of Armenia Ivan Kuleba and the Ambassador of the Republic of Armenia to Ukraine Vladimir Karapetyan. This was reported by the Deputy Prime Minister’s Office

At the beginning of the meeting, the Deputy Prime Minister mentioned the organization of the sitting of the Armenian-Ukrainian intergovernmental commission in terms of developing socio-economic relations and revealing perspective directions of cooperation. Mher Grigoryan noted that the trade and economic relations between Armenia and Ukraine have a great potential for development, the realization of which the Government is ready to work with Ukraine’s partners.

The Minister of Social Policy of Ukraine thanked for the reception and noted that he had arrived in Armenia accompanied by a large delegation to participate in the sitting of the intergovernmental commission. Marina Lazebna presented to the Deputy Prime Minister the main issues included in the agenda of the intergovernmental session, emphasizing that due to the work done as a result of the session, bilateral cooperation will be improved.

During the meeting, the Deputy Prime Minister also stressed the need to intensify contacts between business circles and present the advantages of the Armenian market to Ukrainian businesses.

The peculiarities of the policy implemented in the field of social protection in the two countries were touched upon, and the exchange of experience in this field was also discussed.

At the end of the meeting, the Deputy Prime Minister wished fruitful working discussions within the framework of the intergovernmental commission.

Strong agreements have been reached. Gegham Gorgyan had meetings with the heads of competition bodies of a number of countries in Berlin

They found weapons, rockets and grenades at the entrance to a campsite in Ezeiza

“They don’t work efficiently in Armenia… If it was necessary, let the state support, produce 100 cars, subsidize someone.” Khachatur Sukiasyan