Thousands of migrants protested in Mexico and threatened a new caravan 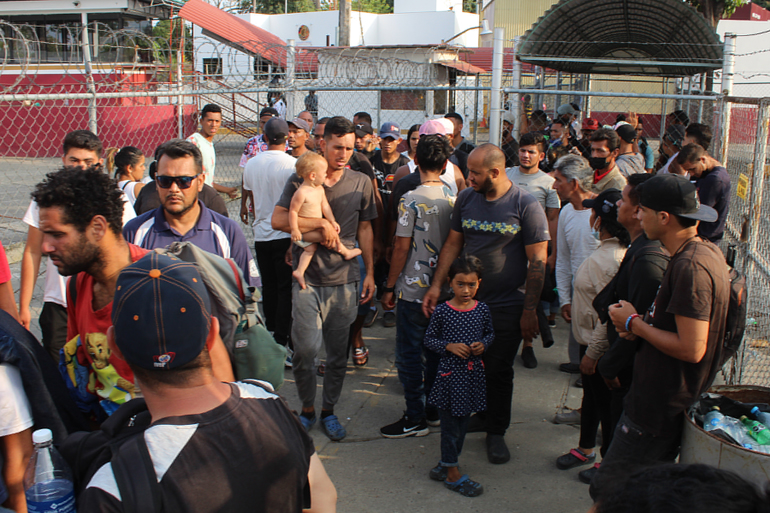 
Nearly 2,000 migrants protested this Monday at the offices of the National Institute of Migration (INM) on the southern border of Mexico to request temporary permits. to travel through national territory and threatened to form a new caravan if they do not get a response.

This group of people, mostly from Venezuela, Central America, Haiti, Colombia, have been stranded for several days waiting for the attention of the Government’s INMbut they have become desperate because in Tapachula, on the border with Guatemala, they cannot afford lodging, food and transportation.

The Venezuelan Víctor Arenas indicated that they require a 30-day temporary permit to transit to the United States or Canada because they are not looking to stay in Mexico.

“We will leave this Wednesday morning, because the immigration authorities are only attending to 100 people and according to the account we have, there are about 2,000 people (stranded in the place) “, told Efe.

The migrants have begun to concentrate in the Bicentennial Park in Tapachula, where they are already making lists to write down all the people who will walk out.

The also Venezuelan Diana Kero accused the INM authorities of starting work after noonso they do not have time to attend to the thousands of migrants.

“We are going to march if possible from tomorrow, because we are organizing to leave as soon as possible, because we need permission to obtain this document»he pointed.

Other groups of migrants from Venezuela who are waiting for paperwork requested that migration processes be streamlined given the growing needs of travelers.

“There are many people with sick children, we are economically collapsed, what we need is for them to give us the documents and let us flow, because many have nowhere to live or be paying for food, which is the main thing “said a migrant who asked not to be identified.

Yoconda, who is traveling with children, indicated that walking in a caravan is their last resort, because they want to do things peacefully and safeguard the integrity of the families.

“If it is true that they have 100 windows for migrants, the authorities must have the capacity to serve everyone”, he expressed.

The caravan reflects the record migratory flow to the United Stateswhose Customs and Border Protection (CBP) Office detected more than 1.7 million undocumented immigrants on the border with Mexico in fiscal year 2021, which ended on September 30.

The Mexican government reported an 89% year-on-year increase in the number of migrants presented or channeled by the immigration authority in the first quarter of 2022, adding 77,626 from January to March.

League Cup: San Lorenzo could not with Huracán and had to settle for a draw