There is a planet where sapphires rain down from metal clouds 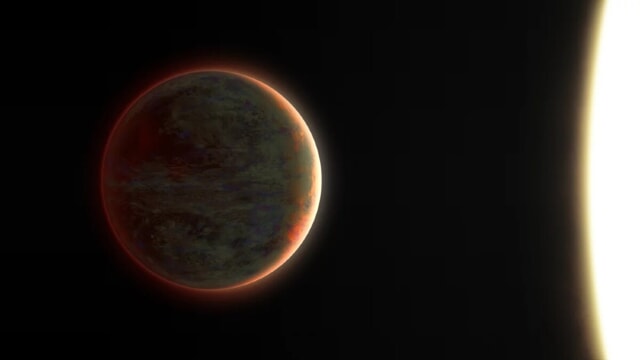 A mass slightly higher than that of Jupiter, almost twice as large, a boiling atmosphere that can exceed 3 thousand degrees centigrade, and two completely opposite faces: one perpetually illuminated and the other immersed in perpetual darkness. Welcome to WASP-121b, an exoplanet orbiting a distant star in the constellation of Poppa, about 850 light-years from Earth, where winds blow at 5 kilometers per second and liquid gems rain from clouds. To reveal these incredible atmospheric phenomena is a study just published on Nature Astronomy by an international research group, which has modeled with never reached precision the characteristics of the atmosphere present on the two faces of WASP-121b.

To draw the attention of researchers to this distant exoplanet are two characteristics that make the conditions in its atmosphere particularly extreme. WASP-121b is in fact a so-called hot Jupiter, that is a gas giant like Jupiter which is however very close to its star (Wasp-121), around which it completes a complete orbit in just over 30 Earth hours. Furthermore, the planet is also in a condition called tidal block: its period of rotation and revolution are the same, and therefore always shows the same face in the direction of the star, as the Moon does with the Earth.

It was previously discovered that water vapor is present in the stratosphere of WASP-121b, and the temperature changes that occur between the upper and lower layers of the atmosphere on the illuminated side have been documented. The new study, however, goes much further: by studying the conditions present on the dark side of Wasp-121b thanks to the spectroscope of the Hubble Space Telescope, and thus documenting how the temperature varies in the two faces of the planet and how the water circulates in its atmosphere, the research has revealed for the first time, in detail, some of the characteristics of the “waspian” weather.

Here, for example, the water cycle is rather peaceful: the water evaporates due to the heat, condenses in the clouds, falls to the ground like rain, and starts again. On WASP-121b we would see something much more extreme. In fact, on the illuminated side, temperatures reach almost 3 thousand degrees, and the water molecules are broken into the atoms that compose them (oxygen and hydrogen) by a process known as thermal decomposition, and then sucked towards the dark side. On the unlit side, temperatures drop to around 1,200 degrees, allowing water molecules to form again from oxygen and hydrogen atoms, to be quickly dragged back to the illuminated side. A frantic cycle of destruction and rebirth that does not give the water time to form clouds like those seen on Earth, powered by winds that blow all around the planet at speeds exceeding five kilometers per second.

Having collected detailed information on the temperatures present at different altitudes on both faces of WASP-121b, the study also allowed for predictions of which elements may be present there, and under what conditions. In this way, the authors discovered that in the dark side of the planet there are probably clouds, even if not composed of water molecules: in fact, metals in gaseous form, such as iron, aluminum or titanium, condense. Once the clouds are formed, the metals (probably) precipitate towards the lower layers of the surface, where the authors of the study hypothesize that they give rise to phenomena impossible on our planet, such as a rain of rubies and sapphires in liquid form (or rather corundum, the mineral from which they are composed).

“It is exciting to study planets like WASP-121b, which are so different from those in our Solar System, because they allow us to observe how atmospheres behave in extreme conditions,” explains Joanna Barstow, of the Open University of Milton Keynes. Not surprisingly, the researchers are already organizing the next round of observations: “To learn more about the planet – reveals Thomas Mikal-Evans, astronomer at the Max Plank Institute for Astronomy and co-author of the study – we will study it with the James Webb space telescope, already during its first year of activity “.

Google Maps out of order for several hours, the navigation app on tilt all over the world

Tasty and easy omelette to prepare in 10 minutes