The story of the students and professionals who teach classes outdoors to poor children Nearly 70 people make up these “educational brigades” that assist minors from neighborhoods such as “La Esperanza”, “Alfonso XIII” and Villa Larman. 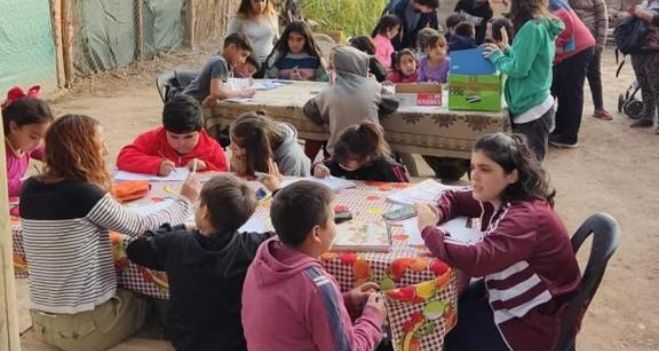 
Three times a week they leave their obligations aside and dedicate all their time and availability to reach their “other” world. To the place that fully connects them with reality. All with the sole purpose of being useful where they belong, to those who need it most. This is the group called “Solidarity Brigades” a group of young people who teach classes -often in the open air- to hundreds of children in deprived areas. Three times a week they visit Villa Larman and La Esperanza in Rawson and the Alfonso XIII settlement in Pocito, In the latter, the group plans to build a classroom that will also be used for multiple uses by the local residents. 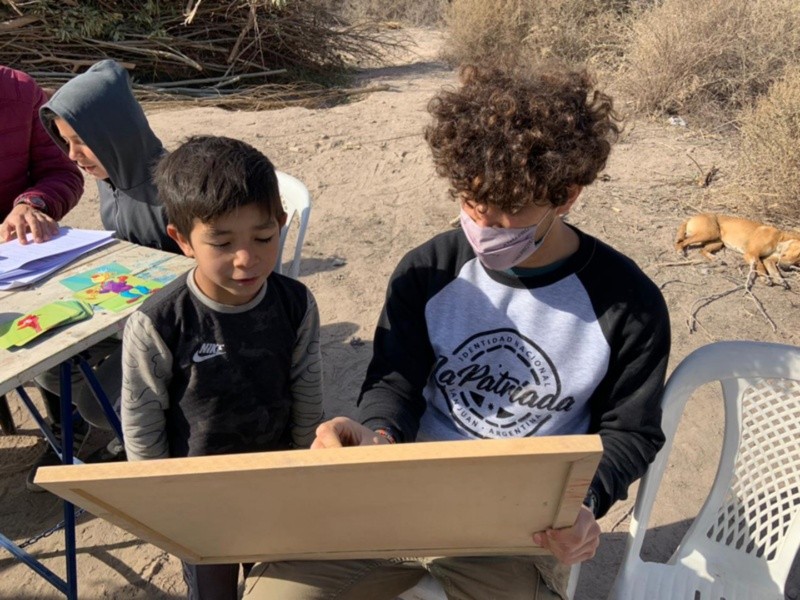 Some students from different careers at the National University of San Juan, other professionals already received but all gathered with the sole purpose of collaborating with those who need it most. “At first we started with 6 or 7 and today we are almost 70 people working with the aim of giving a hand to those who need it,” says Octavio Camus, a young lawyer who is one of the pioneers of this initiative. Always carrying out solidarity activities, he says that they began by helping picnic areas and doing recreational activities with boys from Villa Larman, in Rawson.

At the beginning they showed movies for the boys in the Neighborhood Union or they gave them a snack, but the pandemic arrived and caused the “click” in that group. “We began to see this problem with education, because without the media and technological tools and schools shut down, we didn’t want anyone to drop out of school,” says Octavio. It was then that the group proposed ideas such as buy mobile data packages, print the children’s educational guides and provide school support to the little ones as the pandemic was enabling activities.

The move was igniting and advancing, so much so that it began to expand thanks to the spread on social networks and today it has 70 people traveling on Mondays, Wednesdays and Saturdays in three specific areas: Villa Larman -where the “educational brigade” began-, Villa La Esperanza also in Rawson and the Alfonso XIII Settlement in Pocito. “We give personalized support classes because when we go to the neighborhood we go a lot, so there are two or three kids with a teacher, it’s more personalized attention than they can get at school and that allows us to have a little deeper accompaniment,” he said. group spokesperson.

There is no distinction of sex or age in school support classes. There are children from the age of 5 who go more than anything to play, to adults who intend to finish high school. They not only offer educational classes, but also engage in different recreational workshops with themes such as emotions, sex education and the environment. Even recently, thanks to different institutions that collaborated, including the UNSJ, they managed to take the boys to “Anchipurac.” The group even made artisan garbage cans to place in those neighborhoods so that the residents of the place learn how to separate the waste.

“It was not difficult for people to come to the workshops, perhaps what was most difficult was to approach the neighborhood and have a place where we refer to each other, but after two years of work we are already from the neighborhood, we are in the WhatsApp groups of the neighbors and they even wait for us with snacks. People are very committed. Many times we bring food, we have donations and we take them and also the neighbors contribute what little they have to share it with others,” Camus said.

“A BRICK FOR ALFONSO”

Although “the Educational Brigade” does not neglect any of the three sectors where they operate, today they emphasize the Alfonso XIII settlement. The populous sector has about 400 families and endless needs. There they do not have a physical space to offer classes. It is Azucena, a neighbor from the neighborhood, who opens the doors of her humble home so that the brigade can assemble the boards and tables in that kind of “assembled classroom” so that the children can sit down to study. Logically, with the harshness of the San Juan winter, taking classes outdoors is impossible and that is why they began the campaign “A brick for Alfonso” months ago. The objective is to build a room that serves as a classroom but remains as a SUM (Multipurpose Room) so that the neighbors can use it when necessary.

“In these difficult times where the phrase ‘every man for himself’ is like a fashion, many of us do not think like that. We cannot be happy as long as there are people who are doing poorly or have needs that are not being met. It is a way of life and these are transformative activities”

“The idea is for it to be a community space, it is a very humble area with many needs, many people who have already suffered from the earthquake and the floods. This is an opportunity for them to have an earthquake-resistant place where we can continue with the Brigade’s classes. Educational in a period as harsh as winter and more so in a rural area like El Médano”, commented Octavio.

The plans have already been designed by architects and engineers and the idea is to create a space for 30 or 40 people with a wet area that has a bathroom and a kitchen. For that, they have already started a file in the municipality of Pocito with the list of necessary materials but they are not satisfied with that, the group did not sit idly by and they have already carried out different solidarity campaigns. “People are very committed, many of the local residents are masons and have offered to build it themselves,” Camus said. While they have also held raffles to raise funds and although there is a long way to go to reach the budget, nothing discourages this group of young supporters.

For those who want to collaborate with their grain of sand for the mission of the young people of “Educational Brigades”, transfers can be sent through the Mercado Pago alias: “ladrillitoenalfonso” or to the number 2644 80-9484

Another virus appears / The ‘threatened’ world, children most at risk of liver disease

The words of Pollo Álvarez on a very special day: «My favorite person»