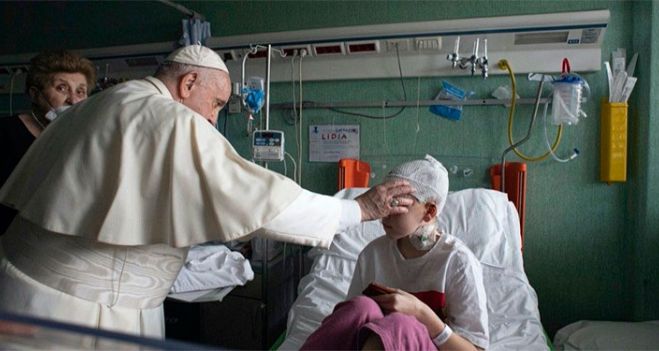 
Pope Francis today visited the 19 Ukrainian children who are currently admitted to the Bambino Gesù pediatric hospital in Rome, owned by the Holy See, according to the Vatican, which recalls that the center has so far treated 50 minors with different pathologies who fled of the siege of the Russian troops.

“The Pope stopped in the rooms and visited all the little ones present, and then returned to the Vatican,” said the director of the Holy See Press Office, Matteo Bruni, according to the Vatican News site.

“They are patients with different pathologies (oncological, neurological and others) who fled in the first days of the war and, more recently, girls with serious injuries from the explosion,” he said.

In the photos sent by the Vatican press office, the Pontiff is seen, accompanied by the president of the Bambino Gesù, Mariella Enoc, who caresses a girl named Lidia, about 8 years old with a bandaged head.

The institution, which everyone knows as the “Hospital of the Pope”, offered to receive Ukrainian children with different pathologies who escape the horror of the conflict.

This pediatric center of excellence in Europe – whose recent history also accumulates experience in treating children with cancer from Ukraine, where there is a high incidence largely linked to the Chernobyl tragedy – offered 20 beds through the institutional channel of the Lazio Region in coordination with the International Red Cross so that children with cancer can continue their treatment safely.

“This is the diplomacy of mercy. We have always received children from war zones,” the president of Bambino Gesù told the Italian media.

In addition to receiving children with hemato-oncological diseases, such as leukemia, lymphomas or tumors by institutional means, they are also receiving all those who arrive by their own means or helped by a family member or friend who went to look for them.

“We have received children with injuries caused by the bombs and other pathologies,” the spokeswoman assured, in statements to Europa Press.

Ukraine’s Prosecutor’s Office for Minors denounced today that at least 112 children have died and more than 140 have been injured in attacks carried out by Russia since the beginning of the invasion on February 24 last.

Most of those children were killed or injured in the Ukrainian capital, kyiv, followed by Kharkov, Chernihiv, Donetsk, Mikolaiv, Yitomir, Sumy and Kherson.

It is estimated that so far almost 3.2 million people have crossed the borders to flee Ukraine since the Russian invasion, according to the latest UN data.

Shvets about his porcelain collection: I drive a 2010 car. She suits me just fine. Up to 12 new machines in each hall of the Porcelain Museum

At 6 in the morning, the thermometer marked 22º and a maximum of 34 is expected.