The pitched battle of Pocito was resolved: 18-month suspension for a player The Court of Penalties of the Sanjuanina League announced the ruling that determined the sanctions for both clubs. 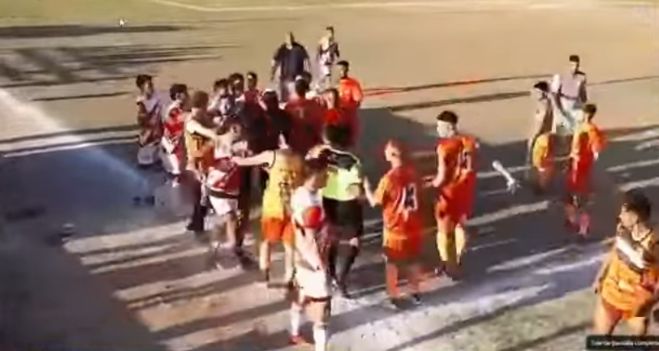 
Sanctions for 12 footballers. Remove points. Court suspension. All this was resolved by the Court of Penalties of the Sanjuanina Football League, which this Thursday announced said ruling after the meeting that could not end between Deportivo Aberastain and Sportivo Rivadavia.

The match played on September 4 at the Naranja stadium in Pocito ended with running, punches and kicks. It all started at 43 minutes of the second half, when the match was 1-0 and the victory was going to be for the locals. The referee gave one of the players a yellow card for simulating and that generated the anger that soon started the fierce fight.

In Rivadavia, the sanctions did not vary too much and there were also six sanctioned players, although without a doubt the one who received the most punishment was Franco Tello whom the Court of Penalties sanctioned with 18 months of suspension. Franco Tapia received 8 dates of suspension, while Mathías Tello and Marcos Cortez received 6 dates, Clever Torres must be out 5 games and Julio Marín will miss 3 games.


But that was not all because the Penal Court also evaluated videos, news and photos taken at the time of the embarrassing event and decided suspend Aberastain court for six matchesIn addition, in the stadium where the Orange club plays at home, they must play their matches behind closed doors.

At another point in the lengthy report, both Aberastain and Rivadavia were sanctioned to comply with an economic fine of 100 entries, in addition to ending the game giving it to both as lost and finally, it takes away three points for both teams at the end of the championship.

Kirchnerism achieved the half sanction to expand the Supreme Court