The medical report for Neymar’s injury and Tite’s unexpected revelation about the blow The forward injured his right ankle in Verdeamarela’s victory against Serbia. The next few hours will be key to his evolution. 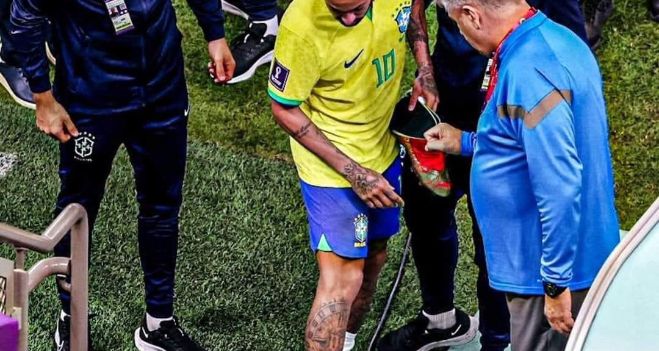 
Brazil’s 2-0 victory over Serbia in their debut at the Qatar 2022 World Cup left peace among the supporters, but also concern over Neymar’s right ankle injury, which forced him to leave the field of play. After the meeting, the team doctor and the coach, Tite, spoke to the press and provided details about the situation of the Paris Saint-Germain footballer.

Rodrigo Lasmar, a doctor for the Brazilian team, reported that Neymar suffered a sprain in the ankle of his right leg. Although we will have to wait for some studies and follow-up that will be done within the next 24 hours to clearly know the extent of his injury which, for now, would not affect the presence of the attacker in the rest of the World Cup, although such time I can rest

“Neymar has a sprain on his right ankle. It was hit by a player from the Serbian team. At that moment the sprain occurred. We put ice on it and we already started the treatment. We wait 24/48 hours to have a clearer idea of ​​the situation. He will continue with physiotherapy, ”explained the doctor.

“If there is any news, we will inform you. Everything will be decided starting tomorrow when we see its evolution. The expectation is observation. Everything we say is premature and I don’t have a definitive answer to give,” added the doctor.

“Danilo has a blow to his left ankle, treatment has already started, but it is somewhat milder (than Neymar’s),” he added.

Then Neymar was seen walking with complications from the field of play to the locker room. The 30-year-old crack limped and his annoyance to support his right foot was eloquent. After a shower and the application of ice to the affected area, he left the stadium with socks and flip-flops and continued to express his problems moving around the mixed zone, where footballers usually attend to the press.

In that place, Vinicius Jr. conveyed calm about his partner: “Neymar is fine. He is a little sad about the blow, but tomorrow morning he will already be happy and happy to recover as quickly as possible for the match against Switzerland, ”said the Real Madrid forward in dialogue with TyC Sports.

“We won the first final of seven. I waited 22 years to be here and I’m better than ever”, added the striker, who also referred to Argentina’s setback against Saudi Arabia: “Football is like that, complicated. But we all have to get here and win. But Argentina has a good team and I wish them luck”.

Although the outlook is premature, Neymar hopes to be present for the duel against Switzerland next Monday. It should be remembered that in the 2014 World Cup in Brazil he was left out in the quarterfinals in the duel against Colombia, due to a knee from Camilo Zúñiga that caused him to break one of his vertebrae.

This Thursday Brazil surpassed the order of Serbia that endured until it could the attacks of the Verdeamarelo cast. The goals were converted by Richarlison, the second of high bill with a Chilean average or scissors in the air.

With this result and level of play, those led by Tite confirmed their candidate status and were leaders of Group G against Switzerland, with the same score as the South Americans, but with one less goal, since they beat Cameroon by the slightest difference in the match that opened the day.

Ara San Juan: they set a hearing to review the dismissal of Macri

Cologne will have a new hospital

Large pustules on the face; A young man shares his experience of monkeypox

The World Economic Forum has opened in Davos. Zelensky will speak to its participants

Final and classic: Forsaken and Del Bono will define the champion of the “B”