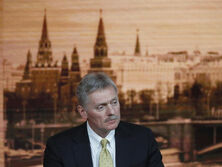 The Russian Federation does not plan to publish the theses that it puts forward in the negotiations to end the war with Ukraine. This was announced on March 22 at a meeting with journalists by the press secretary of the President of Russia Dmitry Peskov, writes the Russian “Interfax”.

According to Peskov, Moscow’s position is “well known to the Ukrainian side” and explained “not only orally, but very clearly formulated in writing.”

All the necessary draft documents “many days ago” were handed over to the Ukrainians, the Kremlin speaker added.

At the same time, Moscow would like “a more meaningful and prompt response every time,” Peskov said. He added that on “something [украинская сторона] answered, to something – no.

Peskov was asked if the Russian Federation would publish the draft documents.

Vladimir Putin’s press secretary replied in the negative. Now “some [переговорный] the process is taking place,” but in the Russian Federation “we would like more active and meaningful negotiations,” Peskov stressed.

He said on March 21 that during the negotiations on ending the war between the Russian Federation and Ukraine, the regime of silence would not operate.

In Ukraine, they began to pay 6500 UAH of assistance within the framework of "Yepidtrimka"

What impact will the fluctuation of the Russian ruble have on the Armenian economy?

Triumphant debut of Báez and Cachín

Up to 20 liters per car: gas stations limit the sale of fuel