The issues of Armenian-British cooperation were discussed 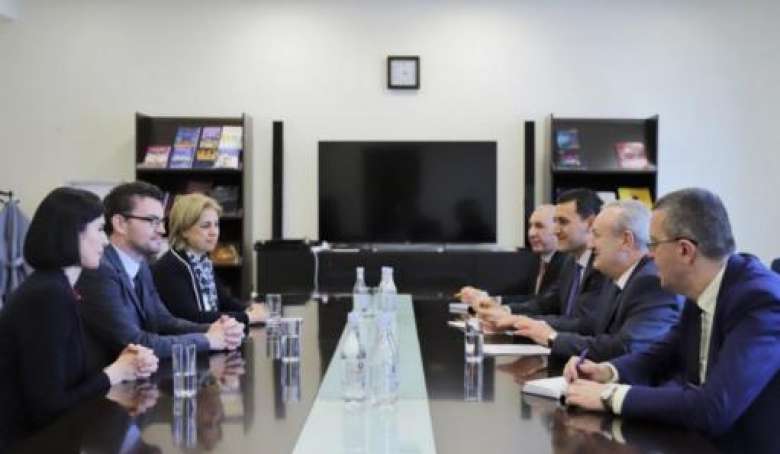 Vahram Dumanyan worked closely with the Embassy խորհրդի British Council in terms of implementing joint programs in the field of SGI. The Minister expressed satisfaction with the implementation of the “English Clubs” program in the regions of Armenia, which is also aimed at strengthening the capacity of teachers teaching English in public schools. Vahram Dumanyan expressed hope that the financing of the project, which is nearing completion, will continue, և the program will be further expanded.

The Minister also referred to the possible cooperation, especially aimed at improving the quality of teaching foreign languages ​​in RA medical specialties and teaching English to lecturers.

Vahram Dumanyan accepted the invitation of the Armenian delegation to the World Education Forum to be held in London on May 22-25, thanked the British Council for its readiness to support the cooperation and visit.

In his turn, Ambassador John Gallagher noted that cooperation between the two countries in the fields of education and culture is one of the important directions. He stated that he had recently visited one of the schools in the Ararat region, where the “English Clubs” program is being implemented, to be impressed by its progress. The Ambassador expressed hope that the experience of the program will have a positive impact and will be used throughout the general education system. He assured that the participation of the Armenian delegation in the World Education Forum will be useful in terms of meeting with representatives of different structures, as well as in terms of exchanging experience in the development of Armenia’s education sector.

During the meeting it was suggested to consider the possibilities of cooperation in a number of directions, in particular, from the point of view of presenting the best experience of the performance indicators (KPI) of the British educational system for the activity of higher educational institutions, from the point of view of implementing a number of cultural programs.

It was mentioned that the British Council closely cooperates with the ministry in a number of programs. The council has developed an English teacher training system, as it has trained about 700 teachers (this year it is planned to train 1000-1500 English teachers). There was also a reference to the cooperation with the regional structures in the field of culture, which is aimed at the development of entrepreneurial skills in the field of culture.

During the meeting, the parties discussed issues related to the support of the British Council in the development of the RA cultural strategy, exchange of managerial experience in the field of culture, improvement of students’ English knowledge, as well as passing the TOEFL and IELTS test for postgraduate study.

June 2: National Day of the Graduate in Economic Sciences

A strong tremor with an epicenter in Mendoza shook San Juan

Delaying motherhood is a risk factor for breast cancer

“We grew up together”: Wanda Nara broke the silence amid rumors of an alleged reconciliation with Mauro Icardi