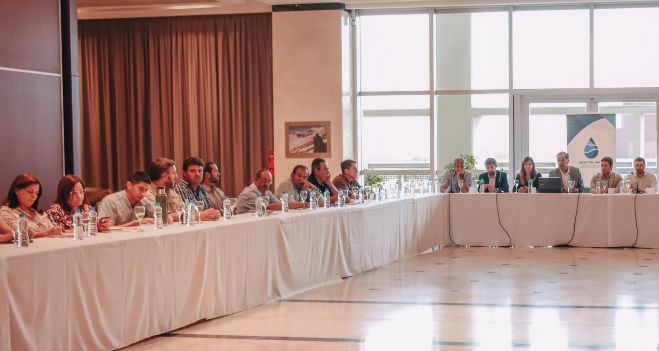 
This is a bill that proposes promoting the efficiency and water sustainability of agricultural irrigation in the province. But the proposal has generated the strong rejection of producers and irrigators with the argument that there is already legislation on the matter and that more initiatives are not needed but to comply with current regulations. The fundamental change that is promoted is to start irrigating according to the demand or the need of each crop, instead of a fixed coefficient, as it is up to now, according to Ramiro Cascón, Secretary of Water, in charge of the Hydraulics Department.

The project was already presented at the last meeting of the Water Table, with which it closed its activity for the year, and proposes the completion of improvement works in the irrigation network and the modernization of the distribution and use criteria, ” to achieve increases in water efficiency, all with the aim of improving water productivity from an economic, social and environmental point of view”, as explained on the occasion.

But producers and irrigators are wary of the scope of the initiative. Pablo Martín, from the Vitícola Round Table, said that “we already have the Water Code and the law for the creation of Hydraulics and there is no need for a new law. We must comply with current legislation.”

José “Catuco” Molina, from the Chamber of Viticultural Producers, maintained that “a new law is not necessary. The issue has already been debated.”

In the irrigation joints there is also rejection. Raúl Font, representative of 25 de Mayo, expressed that “we do not agree with the project. It is that a new law is not needed to carry out the works that are necessary.”

Andrés Mengual, who represents the Rawson irrigators, stated that “we are against the project. We don’t know why there is such a rush to get the new law out when we already have legislation on the matter.”

Andrés Roca, from the Caucete board, maintained that “we don’t know why they want the new law. What they propose is already in the Water Code.”

Asked about the questions, Cascón responded that “we are not going to replace the current legislation. This project is complementary to the legislation that is already in force.” And he added that “irrigation by a fixed coefficient was justified when we didn’t have dikes, but not now.” He said that they are going to make the clarifications and changes that are necessary, but the intention is to move forward with the proposal.

According to the project, it seeks to create a transition and voluntary instrument, which will allow the incorporation of technology and carry out works, without modifying any article of the Water Code. And it aims to guarantee sufficient water to satisfy the human right to water.

It also includes the creation of the Integrated Water Information System, which will provide scientific projection, transparency and organization. And it will allow citizens access to necessary investigations and documents, especially with the current water crisis that the province is going through.

Another of the substantial points is to change the water supply system to irrigators with differential deliveries, respecting the single total volume per concessioned hectare, through a voluntary access program for efficient water use that includes carrying out works and the application of technologies that support flexible and on-demand delivery. This will allow each crop to receive water in different amounts according to its needs during the year. Differential delivery is not clearly regulated in current legislation, according to Hydraulics.

As if to tempt producers to adhere to the new system, the bill proposes exemption from paying the service fee for a period of 5 consecutive years.

Obligation
5 It is the number of years of exemption from the payment of the retributive rate of services for the irrigators of the province that includes the proposal promoted by the Government of San Juan through the Department of Hydraulics.

An idea that they are working on from Hydraulics as a pilot test and to apply it in other departments of the province, such as Iglesia, Calingasta and Jáchal, is the piping of about 10 kilometers of primary and secondary channels that go to the Quinto Cuartel area, in little.

With financing from the Federal Investment Council (CFI), the Hydraulics Department has already hired a private consultant to prepare the project, which will save up to 30% of the water that is now lost due to infiltration. But, in addition, the liquid will arrive pressurized to the producers, who will be able to use it directly to irrigate some 1,700 hectares of vines, farms and olive trees because up to now they have serious problems, in addition to the high costs for pumping.

Until now, most of the producers, with some 300 properties with vines, olive trees, almonds, garlic, onion, tomato and leafy vegetables, use their own pumping equipment with the consequent expense in energy.

EAEU seriously protects its members from unjustified inflation of the value of energy carriers. Always

“I left this place”: The staff lynched a participant of ‘The Hotel of the Famous’ after discovering a joke

There was no agreement: the reduction of the bus service in the AMBA continues