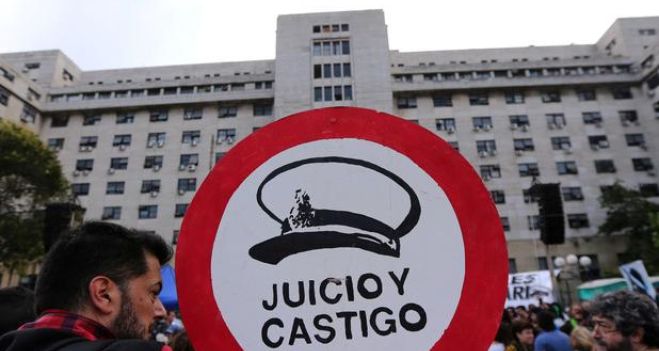 
The Nation’s Human Rights Secretariat expressed its “concern over the increase in house arrest and conditional liberties” granted to repressors convicted of crimes against humanity during the last civic-military dictatorship.

This was expressed by the Secretary headed by Horacio César Pietragalla Corti, after the Justice in a few days left Santiago Riveros and Jorge Tigre Acosta, two of the most emblematic genocides of the last dictatorship, who acted in the clandestine detention centers that operated in Campo de Mayo and the Escuela de Mecánica de la Armada (ESMA), respectively.

In recent times, two other repressors have also benefited from house arrests: Mario Guillermo Ocampo and Luis Firpo, sentenced to life imprisonment in the Counteroffensive trial.

“The Secretary of Human Rights of the Nation sees with concern the increase in home prisons and conditional releases ordered by the Federal Justice in cases of people prosecuted and convicted of crimes against humanity during State terrorism,” indicates the statement given to meet this afternoon.

And he points out that “due to the increase in these benefits, the efforts of the teams of lawyers and experts were redoubled to analyze each case and prevent arbitrary decisions by the Judiciary.”

The @SDHArgentina expresses its concern about the increase in house arrest and conditional releases for those prosecuted and convicted of crimes against humanity during State terrorism.

In this sense, the agency specified that “the teams of the Secretariat carry out permanent monitoring of each of these cases throughout the country, actively participate in the cases in which it is the complainant, carry out strict legal control and demand rigorous to the Judiciary when it comes to granting these benefits and enforcing them.

Likewise, it considered that “the crimes investigated in these cases represent serious human rights violations that the Argentine State has the obligation to investigate, prosecute and punish, and whose sentences must be served effectively and fully as part of the reparation to the victims.” victims and society.

From the Human Rights Secretariat they recalled that, in recent years, according to data from the Public Prosecutor’s Office, the granting of these benefits has deepened and barely a third of the more than 2,200 people investigated or convicted of crimes against humanity are in detention.

In this regard, the statement underlines that “the follow-up and control of requests for house arrest, parole or extraordinary releases is one of the central objectives of this Secretariat, as established in its Strategic Plan for the advancement of the justice process for the Crimes against humanity”.

“With this purpose – the document recalls – a body of experts was created in August of last year that participates in the medical boards arranged in the event of house arrest requests for health reasons or claims of inability to face the criminal process.” This team of specialists -which, since its creation, has already participated in 147 medical boards- intervenes in all cases in which the Secretariat is a complainant and is available for complaints in the rest of the cases.

Based on the provisions of the Victims Law, the Secretariat -through the Coordination of Assistance to Victim Witnesses- also transmits to the courts the voice of family members and survivors of State terrorism in response to these requests from the repressors.

As specified by the agency, in the course of 2022, 628 victims or relatives were already notified to express themselves about a request for a reduced sentence.

It has also promoted in some cases, in coordination with other complaints and the Public Prosecutor’s Office, the holding of public hearings so that the people who suffered these crimes are heard before the claim of the accused or convicted is resolved.

The Secretariat also periodically takes steps to ensure that the Federal Penitentiary Service “provides adequate detention conditions and timely medical services that these convicts may need,” the statement said.

And it concludes: “Through these actions, the Secretariat seeks that the Judiciary take all possible precautions and that it decide with the greatest rigor before granting house arrest or conditional release, benefits that can expose the victims and that could compromise the international responsibility of the Argentine State”.

Does our brain change when we exercise?

“Our task is to teach people how to live on.” Psychologists of the Rinat Akhmetov Foundation conduct group consultations for IDPs