The extreme adventure of an Argentine snow team 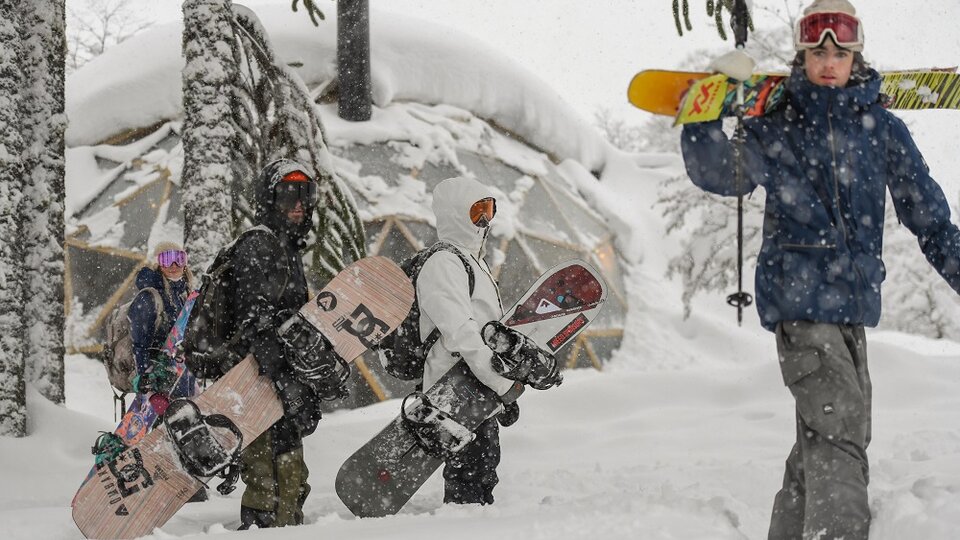 
It dawns in the depths of the Andes mountain range and white dominates the scene. At the end of Moquehue, a small town of just 500 inhabitants located 15 kilometers from Villa Pehuenia and another 10 from the border with Chile, the first rays of light appear and an impressive white blanket can be seen. The cars are covered in snow, as are each of the branches of the millenary araucarias that make the area unique. Some roads seem impassable, with up to five feet of snow on the sides. But the team made up of members of the Quiksilver, DC Shoes and Roxy teams, leading brands in board sports, is the same.

Fernando Natalucci (40 years old, DC Shoes), his brother Nicolás (34, Quiksilver), Cristóbal Tobal Colombo (17, Quiksilver) and Lila Sanz (27, special guest of Roxy) get into the two Ford trucks, essential power managers travel on paths only for experts. Adventure awaits you far from a ski center and its amenities. By their own means they will climb the mountains that practically nobody frequents, much less to slide down at full speed. Next, the intimacy, the secrets and the teachings of a different snow trip, with anecdotes and testimonies from the protagonists.

Each day begins with a plan that is sometimes modified. The team gets into the vehicles and begins scouting for possible spots to slide on the powder snow that has just fallen… The Natalucci brothers, due to their experience and because they are mountain men, take the lead. Since they were teenagers they did a double season, they spent the austral winter in the Argentine mountains and the boreal, in the European ones, as Tobal, the youngest of the band, does now. For 15 years, the Cream they competed successfully there until they decided to settle here, 10 years ago, devoting themselves more to adventure, to the so-called freeride, to ride free in the mountains, especially in those places rarely frequented by amateur snowboarders.

They, in fact, practice “another sport”. The enjoyment in places where normal people would not even dare to walk is an essential part of this romantic side of snowboarding. Getting to wild places, almost unexplored, generates a special motivation. walk where no one walks, live that unique sensation that is surfing in virgin powder snow and face the obstacles of nature or even some that man invents and they challenge, all far from the snow centers and without means of elevation.

They, either with snowshoes, splits -a kind of skis with sealskin- or directly with nothing, climb slopes of deep snow. First it is the effort of hours to then enjoy just minutes, or seconds, of descent. That yes, what enjoyment… In these cases, as never, what costs, worth. The double. These days they chose several virgin spots but, in particular, they dedicated themselves to Cerro El Colorado, in Moquehue.

The voice of experience

Fer Natalucci, the most veteran, contributed his experience in this sport, in the mountains and in the chosen terrain, in the previous and during. “Getting to know new places is always beautiful, but there are always doubts as to whether the chosen place will meet the conditions sought. Although I went before to exploit the land, the reality is sometimes different… Luckily the conditions were right: the place received us with a heavy snowfall and then we had sunny days, not easy in the middle of winter. I was lucky enough to get to know many incredible places around the world but this one, I don’t know if it was because of the magic of ancient forests and because not many people visit them, it made it a very special experience. For me and the whole team”, analyzed who was the captain of the expedition. “I don’t know if I would hang that tag on myself, but I know that this time I didn’t just go for a walk. I was involved in other things on the tour and to have seen the results that we had, almost everything as planned, is something very gratifying. I thank the entire team, from the athletes, to the image guys and the logistics staff. It would not have turned out like this if each one had not contributed their own, ”he closed.

Lila, the only woman in the team, gave her version of the experience. “I liked the feeling of team and community that we had, going out on an adventure, in search of something new, feeling virgin nature again and connecting with the present, the essence of snowboarding,” explained Sanz, born and raised in Bariloche who started snowboarding at 10 and today is an instructor, in addition to practicing yoga, trekking and surfing. She also referred to a learning that she had after experiencing an extreme situation when she was trapped between a river and a slope in a canyon, something that took her more than an hour to solve. “It was a confirmation of my strength and inner peace. Something similar had happened to me before but now I was surprised even at myself. I was able to get out and I tried again, ”she analyzed. Lila ended with a review of her first snowtrip with a team. “I stay with the spirit of pushing the limits a little more, leaving the comfort zone and looking for new challenges, going for dreams, even if sometimes one has tingles and fears,” she acknowledged.

At his side, the youngest of the Natalucci gave his feelings. “What I take away from this trip, despite my experience, is the confirmation of how complicated it is to go to places that you do not know or have as much information about, the setbacks that arise and all the patience and spirit that you need,” said Nico, who He was very surprised with the chosen place. “It was more than he expected and the interesting thing is that he has even more potential. We are left wanting to go to other spots”, he analyzed to close with a personal feeling. “I’m leaving very happy because I hadn’t done this for several years and when I relived it I realized how much I missed it. It was one of the times I enjoyed it the most, especially because I took it in a more relaxed way, without the pressure and responsibility of other trips”, he admitted.

far from the competition

Tobal, the youngest of the team, was one of the most enriched by the experience. Born in Lake Tahoe (USA), because his parents lived there until he was 4 years old, he has been part of the Argentine national team since he was 16. His thing is jumps and pirouettes in the parks (he competes in Slopestyle -rail circuits- and Big Air -ramp jumps-), loves competition, but what he experienced on this trip was just the opposite.

“It’s another type of concentration, physical exhaustion and another patience is needed. Here you have to walk a lot and I usually do little. I go to the park in a chair and mine is more mental. And here the good thing is that there was no pressure of results. It was like taking a break from the competition”, she analyzed and then dedicated a paragraph to the chosen place and the organization of the trip. “I hadn’t even heard of the place and it was a flash. I can’t believe where we were, the place we stayed (the paradisiacal Domos Lodge) and the snow conditions we had. All spectacular. I was able to adapt, I am leaving very happy, ”she commented.

This is how a unique snowtrip was lived inside. In a place as beautiful as it is extreme. With exceptional conditions and in places where not even other professionals had come.

History and Tradition: March 24, 1854, freedom of the slaves in Venezuela

Festa del Tricolore, Mattarella: “The flag on the windows marked the memory of Italy in the most difficult moments of the pandemic”

Kun Agüero “challenges” an Argentine youth who praised Cristiano Ronaldo: “You haven’t played with Messi yet”