The EU canceled the 28 million euro grant for the Port, the ambassador reacts 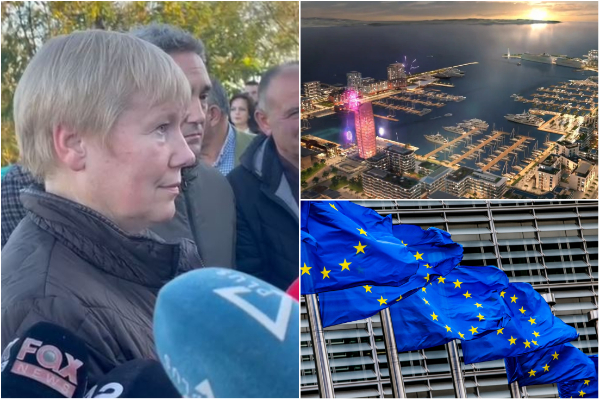 
After the European Union canceled the grant of 28 million euros for the construction of the Port of Durrës, the ambassador of the EU delegation in Albania, Christine Hohmann, reacted.

The ambassador spoke to the media from the city of Shkodra. Asked by the media what her stance is on the Durës Port project, Hohmann stated that the EU stands by the same decision taken a few days ago.

She stated that every time there is a change in investment conditions, the granting of grants is also changed. Therefore, according to the ambassador, they are cancelled.

“It is a very simple answer like the one we gave a few days ago. Whenever there is a change in the conditions of the investment, i.e. a change in the granting of grants for the investment, then this is cancelled. But this does not mean that we are not in communication with the government to understand where the investments will be made”. This is what the EU ambassador said to the media from her visit to Shkodër.

Read more: The EU cancels the Investment Fund grant for the port of Durrës

Read more: Porti i Albaari/ Rama insults the opponents, but gives neither numbers nor answers

Her talent inspired 'Dy korto Mat', chess champion Rozana Gjergji confesses in 'Essence': On the day of the wedding, my father was arrested

The network drew attention to the illustrations in Zaluzhny’s office, which the wife of the commander of the Azov regiment Prokopenko dedicated to her husband. A photo

Unusual: delivery for scammers in the Miraflores Penal in Catamarca

Why do I have such a weak sense of orientation ?!

Danilov: Putin’s tasks have not changed – to destroy the statehood of Ukraine, its top leadership

Symptoms range from red spots on the cheekbones to hair loss; Lupus is not trivial