The Brazilians crushed a hard Serbian nut, the Portuguese were victorious on the wings of record holder Ronaldo 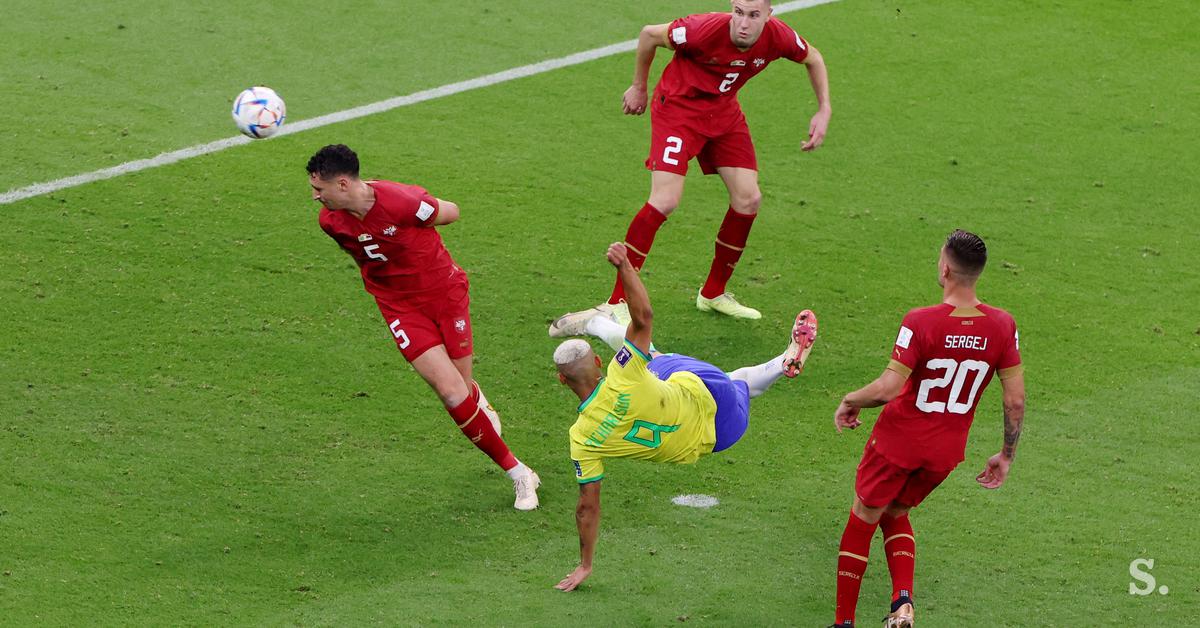 The first round of the World Cup in Qatar ended today with the first matches in groups G and H. Two of the favorites of the tournament – Brazil and Portugal – also started it victoriously. The former, after minor difficulties, crushed a tough Serbian nut and won 2-0, both goals being contributed by Richarlison. The second one beat hard-working Ghana 3:2, and Cristiano Ronaldo set a very special record. The day started with Switzerland beating Cameroon, while Uruguay and South Korea went goalless.

In the last match of the first round of the group stage at the World Cup 2022 in Qatar, Brazil defeated Serbia 2:0. The Selecao is considered the first favorite of the competition in the bookies. The five-time world champions want to win the sixth star, the first in twenty years.

In the first half, the Brazilian footballers completely dominated the field, they also fired three serious shots into the Serbian goal, which Vanja Milinković-Savić half The Brazilians entered the second half even more violently, in the 60th minute Alex Sandra hit the post of the Serbian goal with a strong shot from a distance, but it remained 0:0. In the 63rd minute, the Brazilian fans only rejoiced at the leadership, he scored the first goal of the match Richarlison. With a remarkable goal in the 74th minute, he increased Brazil’s lead to 2:0. Vinicius Junior assisted both goals. The coach Tite replaced him in the 76th minute, three minutes later he called Neymar and the hero of the match Richarlison to the bench. The Brazilians continued to attack, but it remained at 2:0.

Photo gallery from the match between Brazil and Serbia:

Portugal faced Ghana today and won 3-2. The Portuguese pressed hard from the referee’s first whistle, even Cristiano Ronaldo had a few chances to score, but the Ghanaian defense held out. Ronaldo even hit the net in the 31st minute, but the referee immediately disallowed the goal, as CR7 committed an attacking foul just before the shot. The Portuguese were more aggressive than the Ghanaians in the first 45 minutes of the match, but they just couldn’t score a goal.

It’s in the 63rd minute Cristiano Ronaldo one of the Ghanaian defenders was brought down in the Ghanaian penalty area, the referee pointed to the penalty spot and the 37-year-old virtuoso coolly converted the harshest penalty to give Portugal the lead. With this goal, his eighth at the World Cup, Ronaldo made history. He became the first footballer to score in five World Cups!

In the 89th minute, when the Portuguese coach Fernando Santos had already called Ronaldo to the bench, the Ghanaians struck again. He scored for 2:3 Osman Bukari. The Ghanaians made a strong comeback in the end, but the rest was the victory of the Portuguese.

Photo gallery from the match between Portugal and Ghana:


Two-time world champions Uruguay, who were last ranked the best in the world in 1950, did not live up to their role as favorites against South Korea. The fans waited in vain for goals, the nets remained untouched, and the South Americans, especially in the attack, where they have many stars in their ranks, showed significantly too little to be able to realize the set goal. Despite their poor performance, they were only a few centimeters away from the lead twice.

At the end of the first half, he is the captain Diego Godina representative of the older generation of Uruguayan football, which most likely played in the last World Cup (there are also Luis Suarez, Edinson Cavani, Fernando Muslera and Martin Caceres), shook the post after a shot with his head. He experienced similar bad luck Federico Valverde who, in the penultimate minute of regular time, hit the frame of the goal after an excellent shot from distance. The most unpopular result was 0:0, the fourth in this year’s World Cup.

Ugly! The new editor of Siola deleted Jančič's column from Siola, where he writes about the connections between Golob and the media

Rating: this is how Andy Kusnetzoff measured the cycle in his competition with El Trece

Covid 19 situation / Ministry of Health: 27 new cases and no loss of life in the last 24 hours

Polish prime minister believes that because of the war in Ukraine, Poland and Hungary parted ways

Kuleba named five parameters of the special tribunal for Russia