The autopsy confirmed that the couple drowned, trapped in the car that fell into the drain 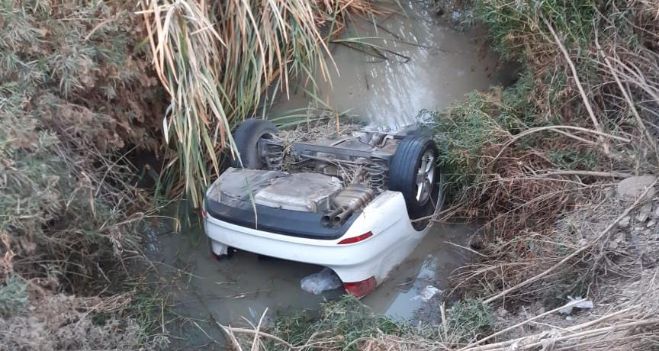 
An accident that shook San Juan. Due to the youth of the victims, due to the characteristics of the accident and, according to what emerges from the investigation, due to a series of factors that did not collaborate for a young couple to survive.

This Tuesday morning the Angaco department was shocked upon learning that two of his neighbors who were traveling in a car lost their lives. Emiliano Mereles (25) and Gimena Castro (19) were boyfriendsand what had been a shopping spree ended tragically.

As far as research is concerned, there were doubts whether death had been caused by the blow or by drowning. The autopsy revealed this afternoon that there was fluid in their lungs, they drowned, police sources trusted.

The accident happened in Miter and Divisoria streets. They believe that the VW Vento that Mereles was driving lost stability when it crossed a narrow bridge and ended up in a channel that serves as a drainage channel, on a street that is perpendicular to the one the car was traveling on.

The investigation reveals some chilling data that reveals the little fortune that the couple had. They speculate that, if the vehicle just passed by and there was no maneuver, it probably did not get stuck in the ditch. The thing is for how the Vento was and waiting for the skills that deliver the mechanics of the accident, the vehicle took a small jump on the bridge and when it reached Miter Mereles street it carried out some kind of maneuver – it wanted to turn – and overturned, ending up on its back and with its trunk stuck in the drain, which they estimate was no more than 1.50 meters high. water, but enough to cover the cabin.

The width of that channel is almost shod with that of the VW, leaving the doors with little room to open, added to the mud and water. The presumption is that very quickly it filled with water and did not give it a chance to live, added to its own bewilderment of such a blow. With respect to date of death, There is a window of time between 11:15 p.m. on Monday, the Castros’ last contact with their daughter, and the time the car was found, today at around 8:20 a.m. Everything indicates that they had the accident before midnight

There is another factor that did not play in favor of the couple. It is an area without lighting, with gravel streets and houses far apart from each other. Moreover, the closest to the place where the accident occurred is about 200 meters and the people there said they had not heard anything. To this we must add the bushes around the drain that made it almost totally difficult to see if there was anything in that place. And it reinforces this hypothesis that Daniel Castro, Gimena’s father, passed through that area at least 3 times and he did not see anything, in his eagerness to know where his daughter was, who did not answer messages or calls. That drain ended up being a death trap.

What is the optimal sleep duration: a study reveals

Museum of Health Sciences is based in the Maciel Hospital

THERE SOMETHES SOMETHING The emperor exposed Dalila and Dejan, and fiercely slapped Dragojevicka