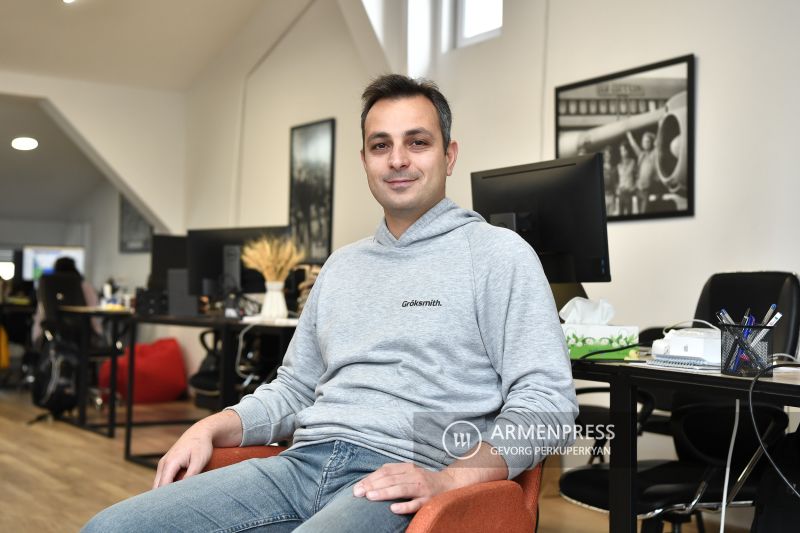 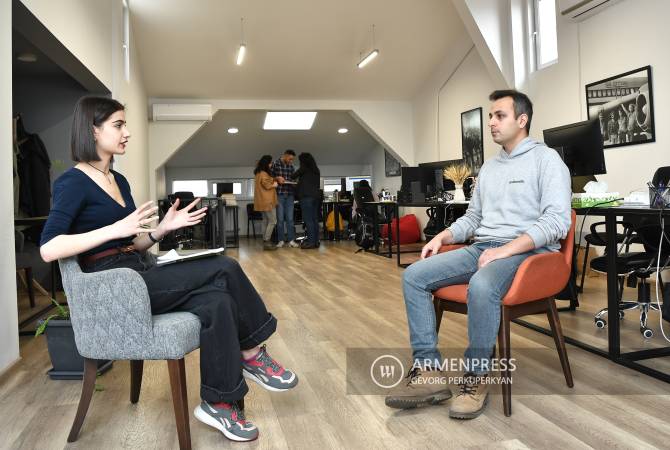 YEREVAN, FEBRUARY 24, ARMENPRESS. Founded in 2015, the Armenian company Groksmith has become a Venture Builder from a consulting service.

In a conversation with “Armenpress” the company mentioned that 2-3 times a month they organize Groktalk networking events, within the framework of which they invite the leading specialists of the field to share their experience.

Formerly known as Hex Division, the company once started as a startup consulting firm. According to director Hovhannes Kuloghlyan– It all started with a friendTigran with. Having a few ideas, they decided to start a business and finally came to the conclusion that the most optimal is to start a consulting company.

“In working with startups, we have provided comprehensive consulting services – product management, software development, marketing, etc. At some point, we started startups, because from the beginning our goal was to achieve business goals with customer companies. which implied active involvement in building the business: We can say that we are a unique factory for startups, ”says Hovhannes Kuloghlyan.

According to the latter, startups have a problem to have results in the short term within the framework of the received investments, as their future life depends on it. The company has the same task – to help their customers be more successful, to be able to attract new investments, and to cooperate with them longer. 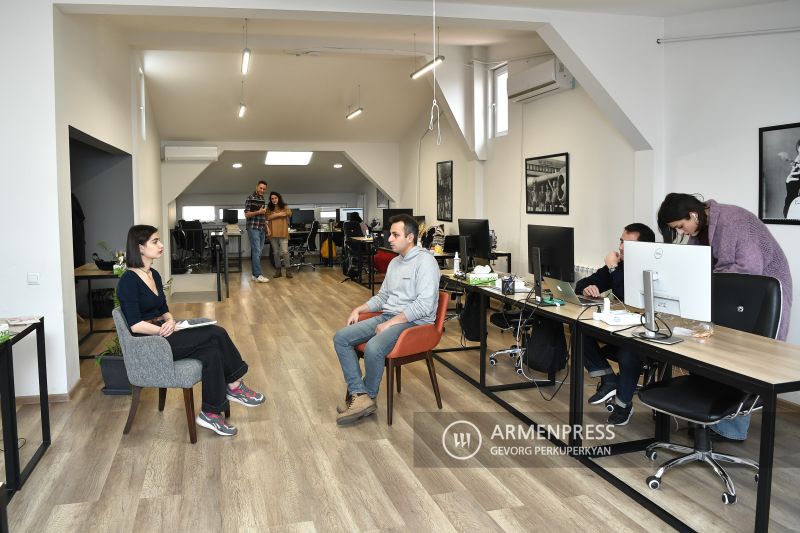 “A startup is like a man jumping off a cliff, who has to build a self-propelled grenade during the flight in order not to be destroyed. Since he has limited resources, we come to the aid of building an airplane. From the beginning we thought to approach the issue as complex as possible. In other words, we know that the goal of the startup is to build that plane, to ensure its flight capacity, otherwise destruction is inevitable. “We are already involved in providing appropriate assistance,” he was quoted as saying.

According to him, the most important thing in consulting companies is trust and good reputation, because it is the work with clients that allows them to develop and gain new clients. Over time, the company’s approaches have led it to become a co-founder, establishing startups on a partnership basis.

Kuloghlyan mentions that a new business model is rapidly evolving around the world: Venture Builder. According to him, that model has some advantages over the classic startup approach. If someone is constantly creating startups, creating a certain knowledge base, gaining experience. A company that creates many startups can share that experience with other startups. He emphasizes that in order to create a company, one must have all the elements. That’s the key to the company’s success. They have collected elements, which they share with startups, and at the same time act as a co-founder.

“The parts of business creation that can be automated, standardized, we are ready to invest in start-up companies, automation takes into account high efficiency and speed,” Kuloghlyan emphasized.

They plan to become the first Armenian Venture Builder to enter the international market, working with leading startups within the framework of this business model.

“Groksmith is a business consulting firm focused on the IT industry,” he said. Chief Operating Officer of the company Ben Frunjyan. 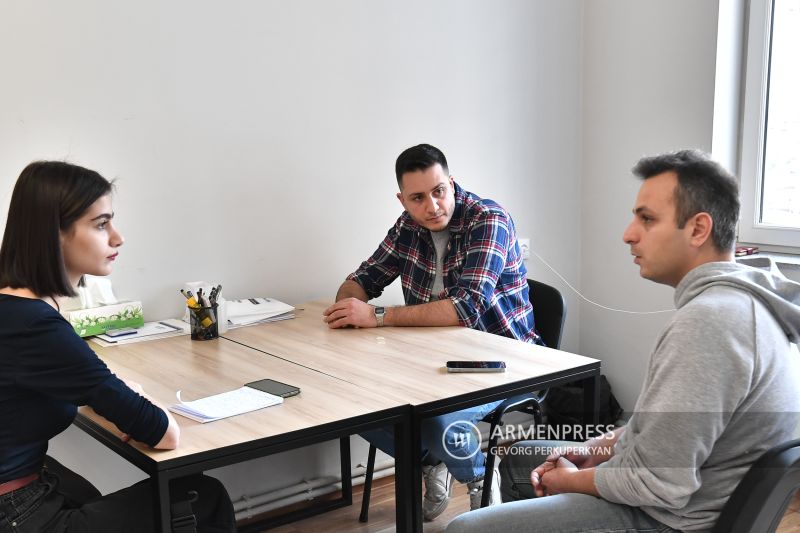 To clarify the idea of ​​the company, he emphasizes that their function can be divided into two stages. The first stage is market research և business design, the second is construction և operation.

“We help startups get their product from the idea stage to the market. Companies come up with ideas, those ideas are incubated here. We study the market, competitors, what products they give, how they provide those services, how they present themselves, what customer segment they have, what age group the product is for. After understanding everything, we move on to the design stage. Its visual appearance, structure, how people will use it, how it will become accessible are designed. After that the product is ready to enter the market. Later we develop marketing steps. After creating a movement in the market, the company starts applying for investments. We try to help in that as well. And after receiving the investments, they are able to move forward by one stage. To create new application opportunities, expand the team, increase the company, etc., “Frunjyan said.

Most of Groksmith’s customers are from Silicon Valley. They also work with German, English and Canadian startups, and the geography of calls received during the day can be said to cover the entire surface of the globe. There are և programmers և product managers in the team, and their total number reaches 40.

“We worked with Armenian companies when we had just started our activity. Working with Armenian startups has been a partnership, that is, not just the provision of services, but we have been co-founders or there has been some kind of cooperation. One such example is the work with Wirestock, which is now growing and developing quite rapidly. One of the successful examples is the Cribby smart crib, ”says Hovhannes Kuloghlyan. 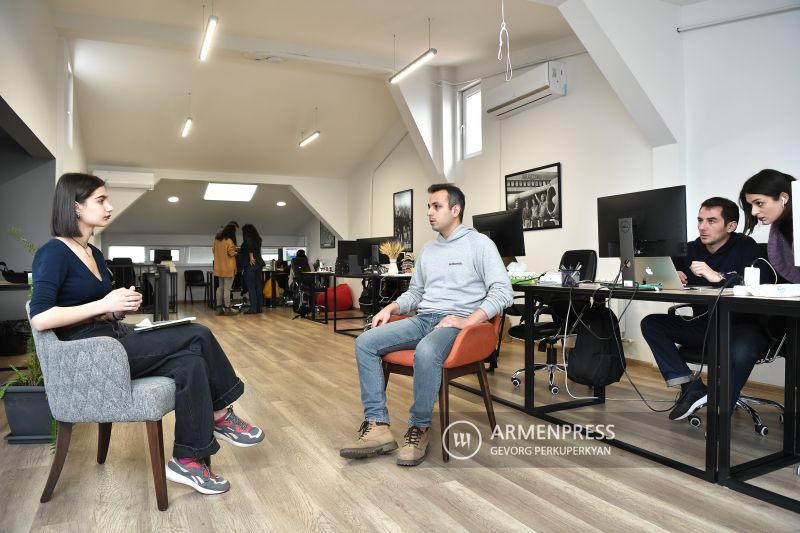 The rebranding of the company was related to the alignment of both the new business model and the ideological basis of the company.

“The name consists of two words. The word Grok is from the book Stranger in a Strange Land by science fiction writer Robert Heinlein. What’s Grok means? deeply understand, to realize to merge with the latter. The second component, smith, means blacksmith, symbolizing work և Craft:: In other words, Groksmith means conscious work. This name describes the company very accurately, as we merge with the product and work to develop it, ”Kuloghlyan explained.

Groksmith addresses the issue of education within the field. That is why Groktalk networking events are organized 2-3 times a month in the company’s office. which: Leading experts in the field are invited to share their experience.

Have a strong goal ․ In the Armenian IT community, networking will be strengthened. People come, share their experience, then communicate with each other. He is sure that some interesting ideas are born from it.

“If we look a little wider, the educational gap is a global problem. We live in the conditions of the fourth industrial revolution. The Internet, new technologies, in a short period of time have changed our lives very drastically. “People are simply not ready for many things, especially the education system is not ready for that, because the system we have was created during the previous industrial revolution,” he stressed.

Having solved the problem, they decided to organize a conference in the spring, presumably in May, where people engaged in innovative education will come, conduct seminars, communicate, share knowledge and advice.

“Clinic of Neuroses” is moving to the renovated, re-equipped “Avan Psychiatric Center”