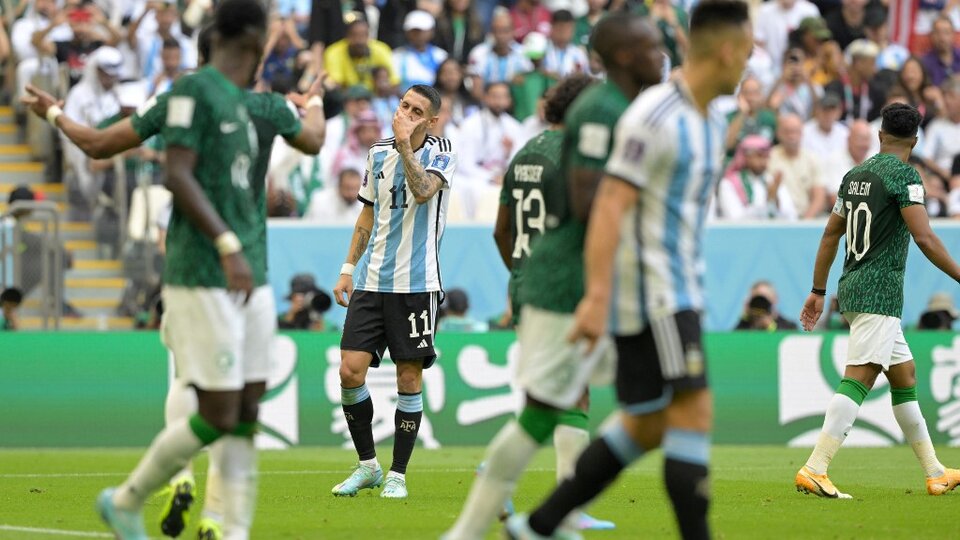 The debut of the Argentine National Team in the World Cup in Qatar was sheer frustration, and the psychic response will have to appear quickly to reach the first objective, which is the classification to the next instance.

The 2-1 defeat against Saudi Arabia raises many questions, which will have to be cleared up from the campus privacy, to be able to straighten the path in the World Cup in Qatar.

The absence of Lo Celso made Argentina play from the beginning with Alejandro Gómez, and in this way the scheme of Lionel Scaloni’s team had a variation: De Paul and Paredes were located in the midfield, and later on a line made up of the Sevilla player, along with Messi and Di Maria.

Argentina sought to control the ball, and those who set up the offensive game they were precisely the last three. Lautaro Martínez moved around the entire attack front, to receive the precise ball from one of them.

Messi’s participation was not decisive during the first part, and although he defined the penalty with category ten minutes into the game, he was well surrounded by the Saudis. The captain, in the rest of the game, did not find the best football version of him either.

The goal allowed the team to acquire more tranquility, and little by little he was making the ball circulate to both sides, so that the rival would do the physical wear and tear.

The chances of increasing the advantage were appearing, but also the advanced positions prevented the second goal. Arabia decided to advance its defense to use the resource of leaving the Argentines offside, and it gave them good results.

Time passed and Argentina fell behind in the field, which allowed the Saudis to cheer up to be closer to Emiliano Martinez. Some Argentine soccer players even conveyed a certain nervousness during that period.

Arabia did not finish off the goal in the first period, but the opposite happened in the second. Renard’s team turned the score around in five minutes, based on the defensive confusion Argentina exhibited. The lack of coordination between Romero and Otamendi was frightening, and surprisingly the opponent reversed the situation with two good definitions.

Scaloni made Lisandro Martínez enter for Romero (he looked bad physically) to correct that flaw, and the Manchester United man was ranked as second central. But also Julian Alvarez participated so that Martínez could have a companion in the area.

Acuna replaced tagliafico and his rises in the left zone gave the team a clearer start. But the problem continued to exist in the creation of attacking football, where Messi and Di Maria they could not gravitate, and the opportunities did not appear.

The end found an Argentine team without ideas or reaction to at least reach a tie. The outlook from here on appears complex, since it was estimated that Arabia was the weakest rival in group C. Mental strength will have to appear to be able to guide the classification.

Wales vs. Iran LIVE: Europeans seek a key win in Group B

Deutsche Welle: Vaccines do not protect us from the Omikron BA variant.5

Ostapchuk after the news of the divorce from his second wife took off his wedding ring. A photo

Why you should sleep with a sliced ​​lemon near the bed