“Tennis” of Bayern, shames the champions of the Europa League 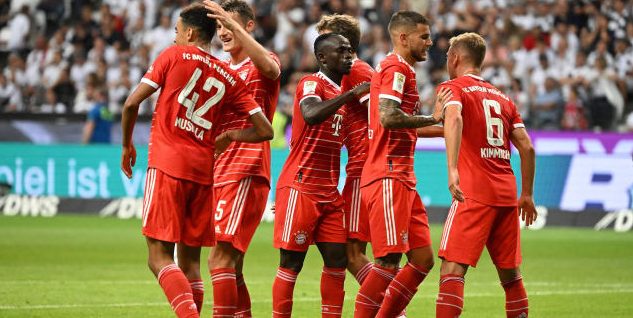 
Bayern Munich remains a goal machine even without Robert Lewandowski. In the first match of the first week of the Bundesliga, the Bavarians embarrassed the Europa League champions at the home of the latter.

The champions of Germany won 1-6 in the field of Eintracht Frankfurt, where 5 goals were scored in the first half. Kimmich opened the scoring in the fifth minute, while six minutes later Pavard doubled the numbers.

In the 29th minute, it would be Mane’s turn, thus marking the first goal in the Bundesliga. In 35′, Muller serves for Musiala and the talent is at fault for 0-4. Muller is also the protagonist in the 43rd minute with the pass for Gnabry, who scores the fifth goal, ending this challenge very quickly.

The locals scored the goal of honor in the 64th minute with Muani. In fact, it was a blunder by the goalkeeper Neuer rather than the credit of the local player. In the end, in the 83rd minute, there was room for a sixth goal for the friends, where Musiala did not forgive, scoring twice in this challenge.

From meeting Tolgahan, to the children...

Armenia has all the necessary resources to ensure the food security of the population. Vahan Kerobyan

No more 3D printing and room and eye surgery