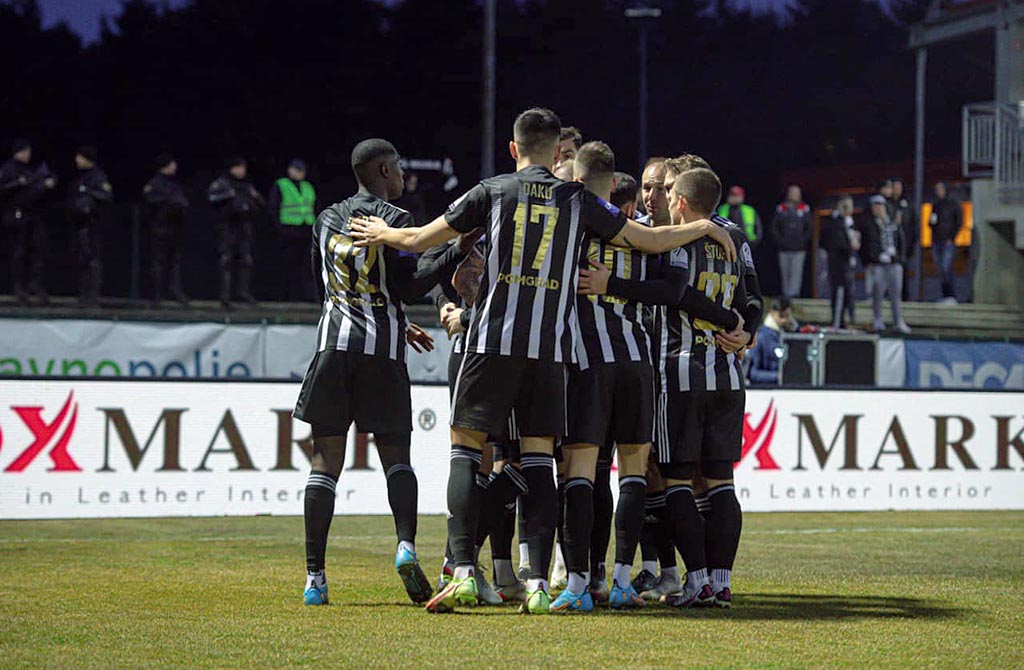 After the replacement of coach Oskar Drobnet, Aluminij fans were looking forward to today’s match with Maribor, when the new coach Robert Pevnik presented himself on the bench. Given that Tabor won yesterday, the ‘Foresters’ need points, of course.

After the defeat in the previous round, Maribor had to win, of course. The Purples simply could not afford two consecutive defeats. In the end, it was a little lacking that this was not exactly what happened.

The match started according to Maribor’s wishes. Antolina’s pass from the side was blocked by the home goalkeeper Janžekovič with his hand right on Alvir’s leg, who sent the ball into the net from six meters.

When Sirk increased the lead of the Purples in the 20th minute after a pass from Mutavčić, it seemed that the home team would suffer a heavy defeat again.

But the Aluminij players showed character and equalized by the 54th minute. Both goals were scored by the skilful Schroler. The first in the 32nd minute, when he outplayed Mutavčić and scored from close range in the short corner as the goalkeeper of Jug. In the 54th minute, Schroler scored from a free kick from a good thirty meters.

In the 74th minute, a complete turnaround, Pečnik’s pass was used by Špehar and put Aluminij in the lead. The home team could have scored the fourth goal, but Nkami’s joy was prevented by the crossbar.

The Purples were saved from complete embarrassment by veteran Tavares, who scored from the penalty spot in the first minute of extra time. A little later, Janžekovič defended Sellouki’s shot, the match ended with 3: 3.

Kidričani, with the exception of the first twenty minutes, played the best match of the spring. Shock therapy with a change of coach succeeded. They were on the verge of a big win, conceding an unnecessary goal in extra time. This time they opened up in attack, Maribor has not received three goals for a long time. They still have problems in defense, they receive goals too easily.

Maribor disappointed again. Such a quality team should not allow themselves to be in a situation to end up scoring a point after a two-goal lead. Above all, the defense was not at the level, in the last two games, the Purples received five goals. The attack was effective this time, despite Mudrinski’s absence.

The current national champions Mura and Olimpija competed in Fazanerija. Muraši are quite far from the top, they can play without pressure. On the other hand, the Ljubljana team is chasing the first place, it is imperative for them to win every match.

The home team took the lead in the 8th minute. After a nice action by Bobičanc and Daku, the latter scored for the first time in the first Slovenian league.

Just three minutes later, Olympia equalized from the penalty spot. Kvesić was a reliable scorer, who was also fouled.

In the 25th minute, Fazanerija was on its feet again. Boikye redirected the pass from Bobičanc to his own net.

This leadership, too, did not last long. In the 38th minute, Crnomarković equalized, scoring with his head and setting the score at halftime.

The second half started with Mura’s third goal. Bobičanc’s shot in the first minute of the match hit the visitors’ defender van Bruggen on the way to the goal, changed direction and ended up in the net.

Few believed that this would be the final result of the match. But the nets were at a standstill until the end of the match.

The guests were closer to the goal. Prtajin could have made a name for himself, but his joy was blocked in the 71st minute by the home goalkeeper Ljubić, and in the third minute of extra time the referee missed his goal.

The Muraši can be satisfied, they have taken advantage of the slips of the leaders in the last three matches and are slowly approaching them on points. But they need a series of victories with which to get involved in the fight for the title. Their form is on the rise, they have been playing better lately than in the first matches of this year.

Of course, the people of Ljubljana cannot be satisfied. They fluctuate too much in form, they have no continuity of games. After a high-scoring victory in the previous round, they seemed to have come up with a game with which to win the title. But the people of Prekmurje grounded them again. They lost the match with a worse game in defense, where they were either late with all three goals or even scored a goal themselves.

Near the end of Internet Explorer

Ukrainian / Russian ratio have only 3 days of fuel and food