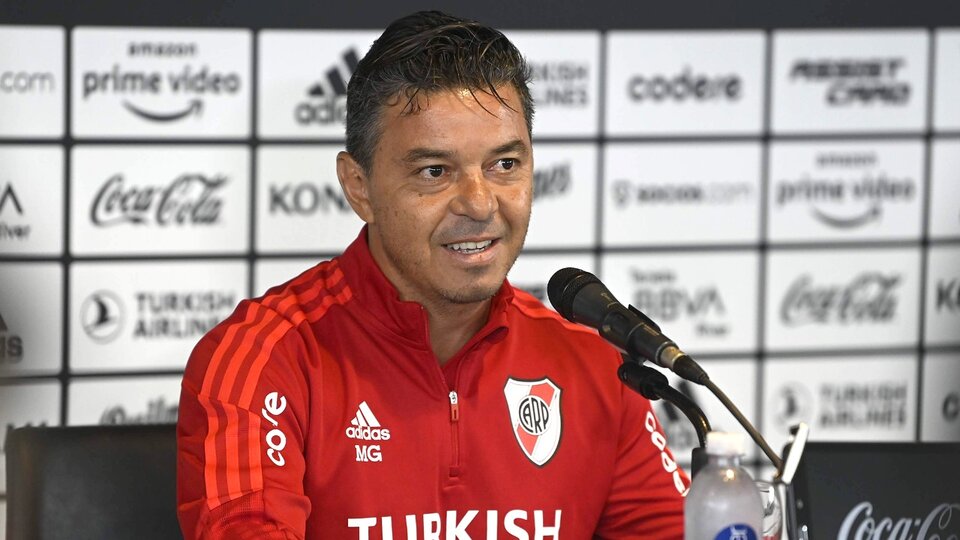 
Marcelo Gallardomanager of River Plate, cconfirmed the starting line-up that will be used this Sunday against Boca in the Superclásicofor date 7 of the Professional Football League Cup (LPF), at the Monumental.

The “Muñeco” confided, at the beginning of the press conference from the River Camp, that The same 11 players who were starters in the 4-0 win against Gimnasia y Esgrima La Plata will take to the pitch on the last date.

“I’m interested in how we got to the Superclásico. I liked the match against Gimnasia a lot. It seems to me that we have been growing footballingly, from minor to major, and we are in a good moment to continue sustaining it”, declared Gallardo.

The doll talked about everything

“There is no need to talk about arbitrations, because they have to be calm to do their job in the best possible way.. I don’t like to talk about the referees to generate a favorable or unfavorable climate,” he asserted in another section of the conference.

Gallardo also spoke about the yellow jacket that his rival will have: “I don’t care what shirt Boca plays with. The only thing that matters to me is that we play against Boca, the rest is up to them.”

When asked if he was related to any cabal, he said: “Each one believes in what they want and that’s fine. The chicana on the shirt doesn’t interest me. I suggested a few years ago to always play with our shirt”.

The game and the fan

About the eternal rival, he expressed: “If I get carried away by Boca’s last game, it could be a well-played game, beyond the tension and physicality. We have another way of playing, and the game can be vibrant from the game“.

Finallythe millionaire DT He also gave his opinion about the supporters: “I like the fan who encourages on the field without acts of violence, who loves the club and the true colors. The hype adds color to the stands, but we want fans who have that real passion for colours. And that they manifest themselves without violence. That is the fan with whom we must identify ourselves”he concluded.

“We don’t leave ours, do we?” Embarrassed after Vakarchuk’s refusal to participate in the filming of the show “Voice of the Country” announced the responsibility of the coaches

Networks: the best memes of Boca’s victory against Tigre for the 2022 League Cup

Punctures and excess potassium: suspicions grow for the death of five babies in a Córdoba Hospital

The situation in Upper Lars requires an immediate solution. Details from the meeting between Kerobyan and Reshetnikov