STORY / “I found myself among 200 bullets”, the ‘terrible of Berat’, Lulzim Caka: The state wanted to eliminate me because I am with the DP! 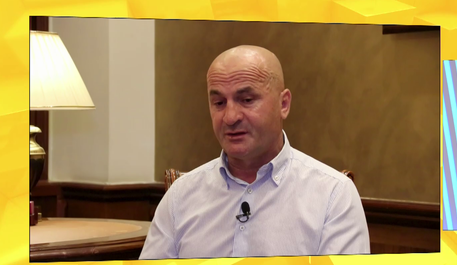 
Lulzim Caka, known as the “terrible of Berat” and one of the most famous criminals in the history of Albania has appeared today in a television interview.

In the studio of the show “Albania Live” on “Top Channel”, Caka told his story, the enmity between the Çalaj and the Yzeirs, the accusations against him and the claims that the state, as he puts it, “wanted to eliminate him”.

Although he is one of the most wanted persons by the Albanian justice, he is protected by the Greek side and today he is free.

“I am fine, I feel good in the Greek state. “I thank the Greek state for giving me the opportunity and recognizing the right that my state has never recognized me.” – this is how he begins this interview.

“I have nothing to do with gangs”

Caka has indicated that he has never had any connection with the gangs, but has been accused because of his right-wing convictions.

“I have never had any connection with gangs. I have not had any gang members. “They call us gangs because we had our right-wing convictions, we did not become left-wing,” he said.

In ’97, Caka found himself in the midst of enmity between the Çalaj and the Yzeirs and was accused of killing three members of the last family.

According to him, the Çalaj are right, the Yzeirs were ambushed and shot over 20 people. Caka added that he did not kill Nezir Yzeiri, Aisha and Iliri.

“Are you involved in the triple murder?” Was the question he was asked.

“Absolutely not. They even waited for me. 20-30 people had been ambushed, we found ourselves among the bullets. They did not have to shoot in my presence. They know the whole story. “Mehmeti has always sent friends to close this,” he said.

The murder of Pëllumb Emin

Another name mentioned is Pëllumb Emini, who is accused of killing him and has a sentence against him.

“I have nothing to do with Pëllumb Emini. They said I killed him, but he killed a 13-14 year old and I have no connection. “The police attached me to the murder because they wanted to keep me in prison,” he said.

“The state wanted to eliminate me”

During the interview, Caka said that the state wanted to kill him because he was right-wing.

“Three days before they wanted to assassinate me, the state, I received a notification. A phonogram from the Ministry of Interior of that time where it was said that all the prototypes, all those who had supported the right spectrum, I am right.

I can never deny it and I do not deny it as long as I am alive, to be physically eliminated. Why did they have to eliminate me physically? I was ambushed by 200 people there, they would have shot me. “I escaped with 4 bullets in my body,” he said.

He then began to explain: “I received information from a police officer and a friend of mine. They came to the village, met their mother and brother and told him that ‘Luli will be killed’. Who? ‘The state’. “

He added that Gani Malushi and Ilir Ngresi were assassinated in 1998.

“I found myself among 200 bullets fired by the police led by them. I escaped with four bullets and was arrested. Xhevahir Cela was killed with a bullet in the forehead, “Caka said further, but according to him, the police staged him as if he were Xhevahir’s killer.

“I will kill as I killed your mother”

Caka also talked about the murder of his mother, who had started to meet him in prison, but ended up massacred in Seman by her son’s enemies. He accuses Ilir Ngresi of this event.

“A service policeman comes to me, I was on the air. I foresaw that something would have happened if my mother had not stayed without coming. The policeman comes and says to me: What is your name? I say. ‘I will say a word he told me, but do not make it public that I am being fired’. I asked him why. He told me that his mother had been killed. Thank you I said.

I held myself, then asked the boss. I was told that he was abducted at the police station and killed. Imagine, the state was able to catch me in ’98, it was not able in ’99 to find it ?. To take a 56-year-old woman and shoot her in Seman, and not catch her? How do you think? It was well organized, my mother was killed by the state at the time. Let Ilir Ngresi come, take my mother to Seman and shoot her in Seman.

What do the new economic measures announced by the national government consist of?