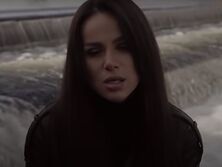 Belarusian singer Meryem Gerasimenko, who sang a song in Ukrainian in Minsk, was placed under arrest. About it informed August 6 on Facebook Human Rights Center “Vesna”.

“Belarusian singer Meryem Gerasimenko, who was detained for a song in Ukrainian, was sentenced to 15 days of arrest. […] The case of Meryem was considered by the court of the Central District of Minsk. From the people who were in the same cell with her, it is known that the girl is confident in herself, but she did not sleep for two days after the arrest,” the report says.

Human rights activists suggest that her boyfriend was also detained with the singer, but this information has not yet been confirmed.

Mirror.io wrote on August 5 that Gerasimenko was detained after her street concert, which took place on the evening of August 3 on the terrace of the Bottle Banks bar on Zybitskaya Street. The publication notes that “this was not the first such performance by Meryem in a bar, but this time propagandists and security officials paid attention to the concert.”

During the concert, Gerasimenko sang, among other things, the song “Obіymi” by the Ukrainian group “Ocean Elzy”.

Gerasimenko is 28 years old, she sings in the Meriem Band, performs solo. In 2017, she took part in the Ukrainian show “Voice of the Country”, three out of four coaches turned to her. The singer got into Jamala’s team, but dropped out at the stage of vocal battles.

Collaborators announced to Russian media the death of the "deputy head of administration" from Nova Kakhovka, who was assassinated

The most beautiful love poems by Alda Merini