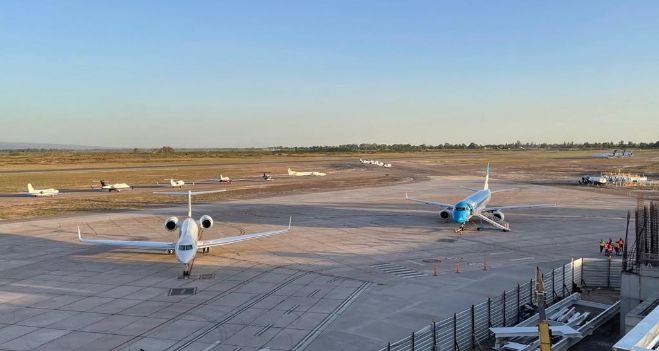 
As of April there will be two more flights per week to travel to Córdoba and another 2 will also be added to go to Buenos Aires. The reason, according to sources from the airport sector, is that the service leaves almost complete for the capital of the country, between 90 and one hundred percent of the capacity of the aircraft, while to the Mediterranean province it is around 70%.

To travel to Córdoba, until now there were two weekly services, on Wednesdays and Sundays, and from next month those on Mondays and Fridays will be added. The machines will take off between 1:45 p.m. and 2:00 p.m. from the Las Chacritas air station. In short, there will be 4 weekly flights, which then continue to Aeroparque. The aircraft that cover this route have 96 seats and the average occupancy is between 65 and 70%.

In the case of Buenos Aires, until now there are two daily flights, from Monday to Sunday. And from April there will be two days a week, Tuesday and Thursday, that there will be 3 daily flights. In summary, during the month of March there are 14 weekly flights, which will be 16 from next month. Some go to Aeroparque and the others to Ezeiza. This last option is of interest to passengers who later have to take international flights and will not need to hire a service to transfer them from Aeroparque.

The San Juan-Buenos Aires route is the one that is working best because the flights are almost complete, said sources in the sector, and it has been the reason for Aerolineas Argentinas to increase frequencies. The intention is that, even in the coming months, the service can continue to improve.

Flights to the Mediterranean province were resumed last January, after 10 years in which there was no air connectivity. Historically, there has always been a lot of ties between the two provinces because, for example, there are many people from San Juan studying in Córdoba and there are also economic contacts, so it is estimated that flights will continue to be in good demand.

As for the cost of the ticket, it is a matter that depends on how far in advance the reservation is made. For example, to Buenos Aires, for April there are offers that start at 7,132 pesos for a one-way ticket. But if the passenger needs to travel urgently, today that ticket costs 57,459 pesos, while the return ticket is around 18,083 pesos, while for April it can reach 9,482 pesos. The ticket offer for April is very attractive, taking into account that the bus ticket starts at 7,000 pesos and in the sleeping car option it reaches 8,500 pesos.

In the case of Córdoba, for example, for April there are ticket offers for 2,826 pesos, while the normal rate is 8,881 pesos. For the Córdoba-San Juan section, the normal rate in both March and April is 3,336 pesos. If the option is the bus, the executive sleeping car service costs 3,800 pesos and a higher category can reach 5,600 pesos.

It must be remembered that a novelty that the provincial airport has is that, with the launch of the Tulum Network of buses, there is a service, the 322, that links the Capital with the air station. The units start operating from the Miter transfer station at 6 in the morning and in 45 minutes they reach Las Chacritas. Before, you had to take the 19, which went to Caucete, and walk with your bags from Route 20, with the disruption that the situation caused. In a service to take into account for those who want to avoid the cost of a taxi or a remis.

16 It is the number of weekly flights to Buenos Aires from April. Now there are 14, but those who will leave on Tuesdays and Thursdays are added.

The expectation that exists in the provincial government is that soon the works can be resumed to advance in the construction of the new air station.

The Regulatory Body of the National Airport System (ORSNA) and Aeropuertos Argentina 2000, made the call for bids for the continuation of the work of the passenger terminal. It will be the fourth time that the works will be resumed, which have an advance of 18%. Thus, the new tender is for 82% of the remaining works. The projected execution period is 24 months.

The construction of a new passenger terminal will allow the province to raise its category with a new international level building, equipped with the best technology for users and passengers.

The airport will go from an existing terminal with 1,706 m2 to a new one with a total covered area of ​​5,000 m2, distributed over two levels. It will even have sleeves for ascent and descent directly from the aircraft.

Carrot cake with almond flour in a few steps

Marek Para is already breathing fresh air: The accused lawyer has been released from custody

The GNB was killed after being accused of alleged rape

According to a private consultant, food rose more than 5% in April

Romania considers withdrawing from Eurovision, RTCG believes irregular voting has nothing to do with Montenegro