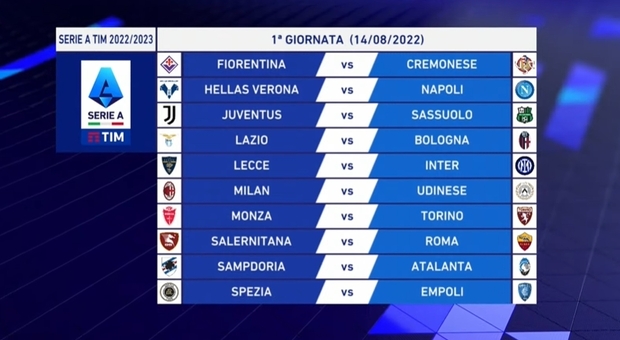 The new Serie A is born. Between asymmetrical groups, four days to be played with the summer transfer market still open and mid-season stop for the World Cup in Qatar, the curtain officially rises on the next championship calendar. The first day of the championship was drawn on live television and streaming, here it is: Fiorentina-Cremonese; Verona-Naples, Juve-Sassuolo, Lazio-Bologna, Lecce-Inter, Milan-Udinese, Monza-Turin, Salernitana-Rome, Sampdoria-Atalanta, Spezia-Empoli. We followed with you the live broadcast of the event, with all the data for the next season which will start, we remember, on August 14, 2022.

Live streaming of the Serie A 2022/23 calendars draw

12:49 And here is the last day of the championship 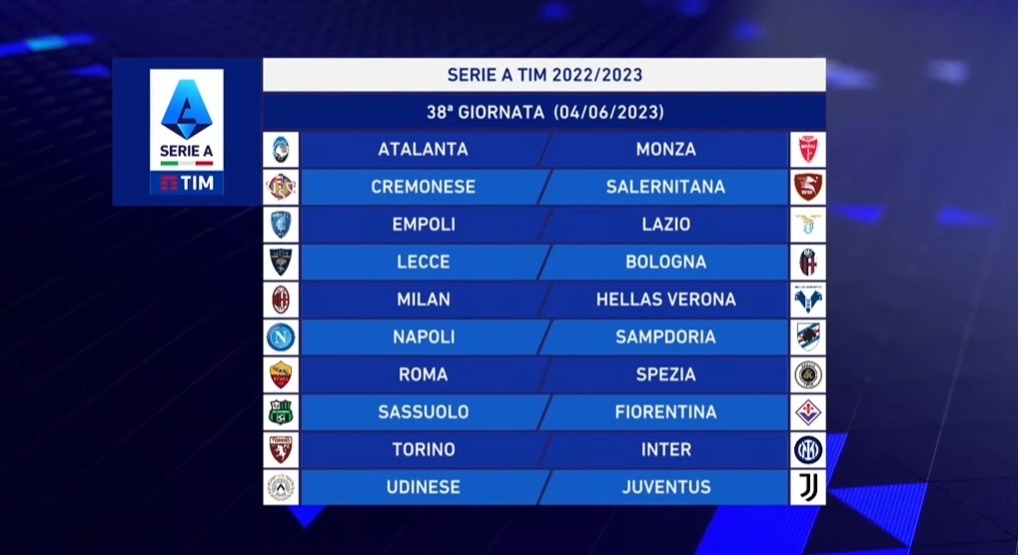 12:44 The dates to mark for the fans of Juventus and Napoli 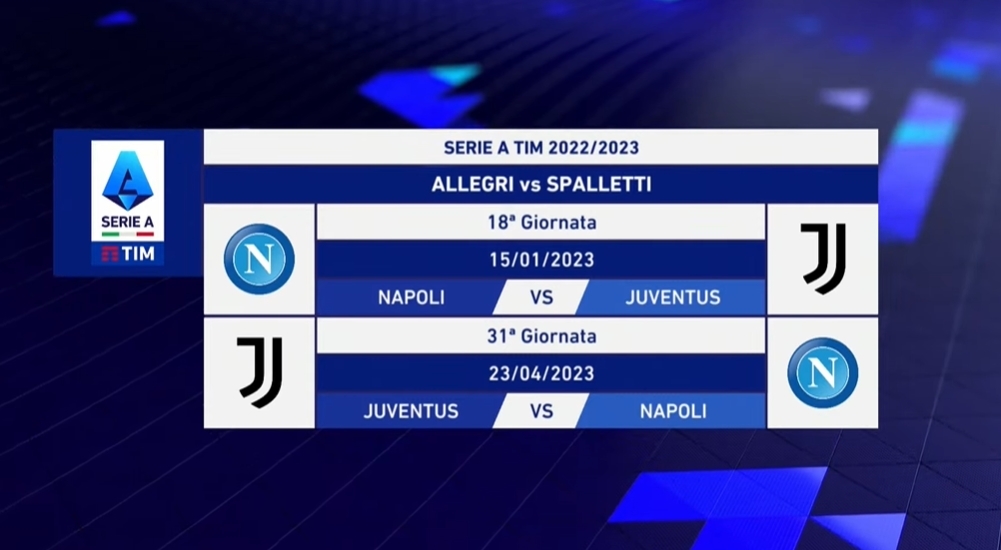 12:38 The direct matches of the league summarized in the graphics of the League 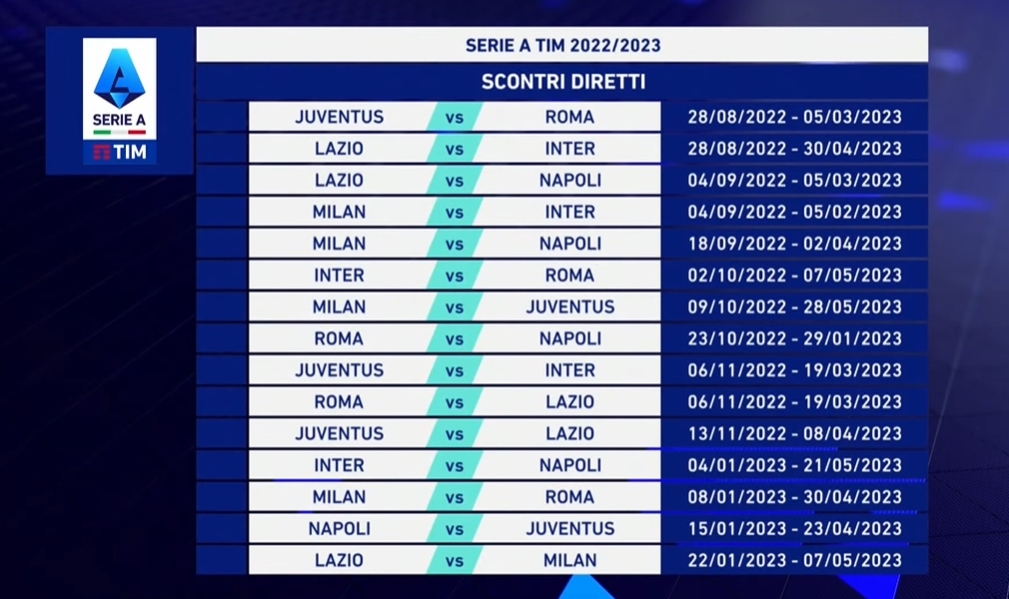 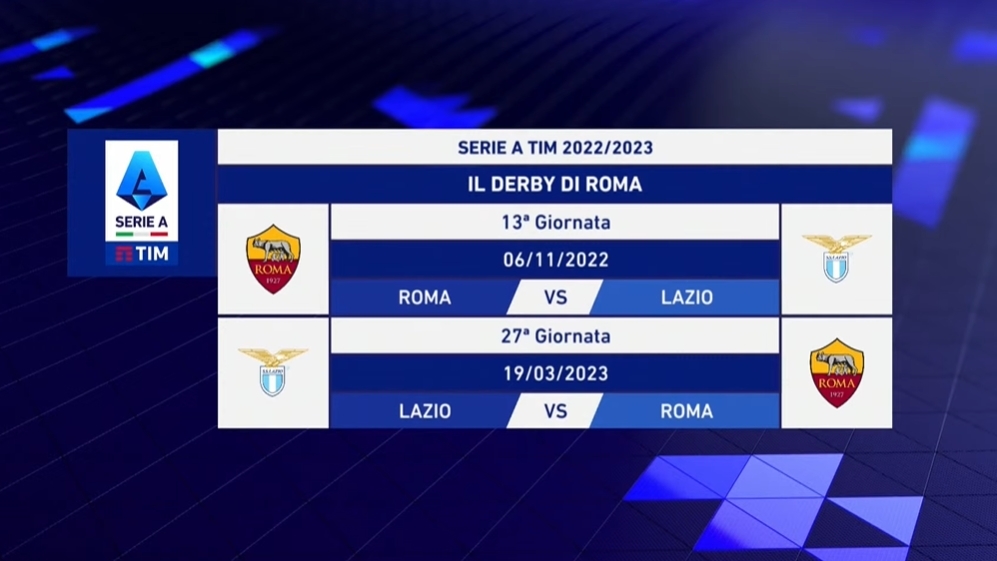 12:27 The Turin derbies have been drawn

12:24 Here is the week day of the championship 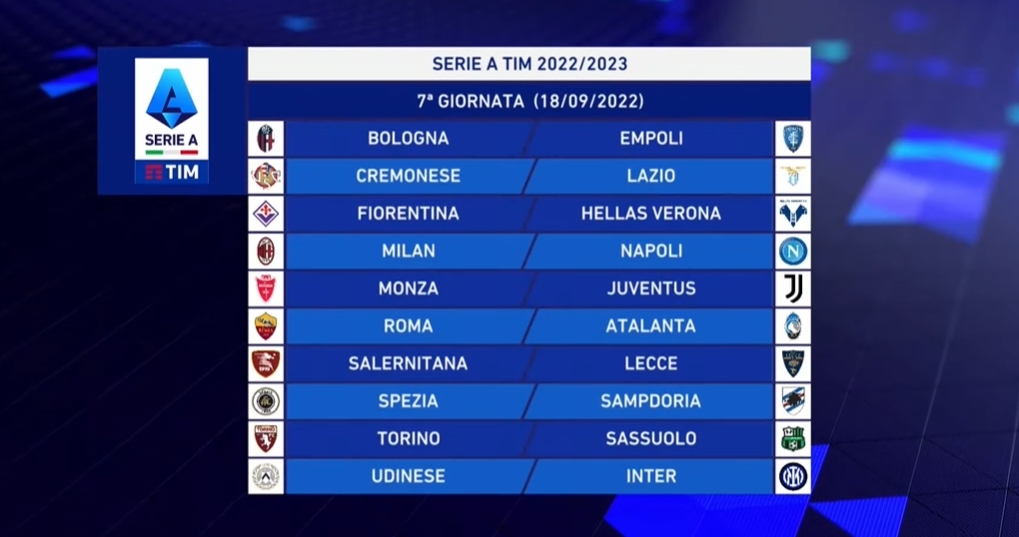 12:23 The sixth day of the championship 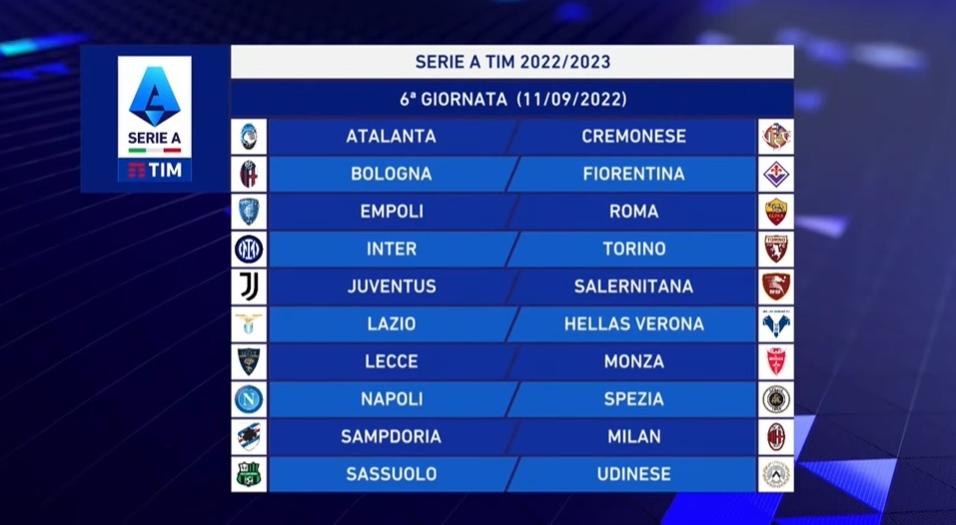 12:22 The draw takes us to the fifth day of the championship, before the stop at the end of the market. 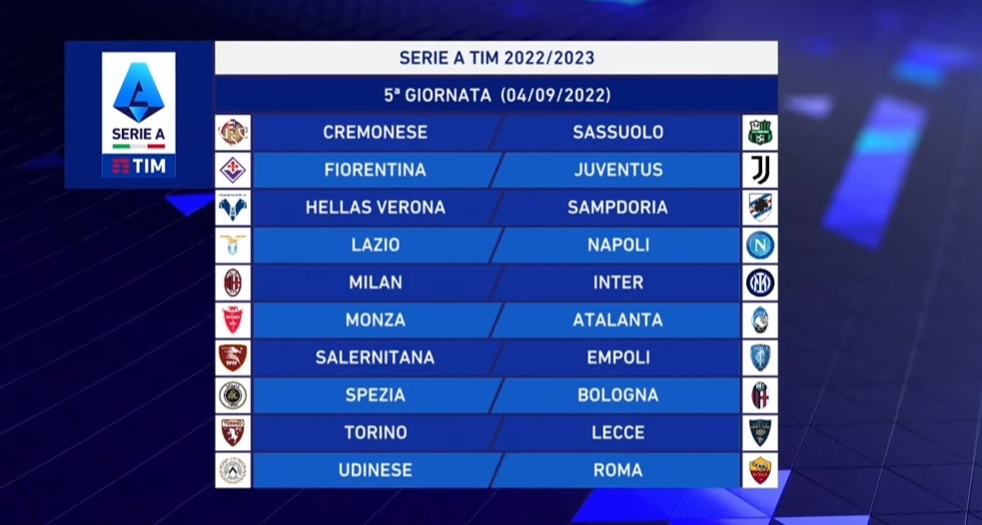 12:21 The fourth day will be the first midweek of the championship 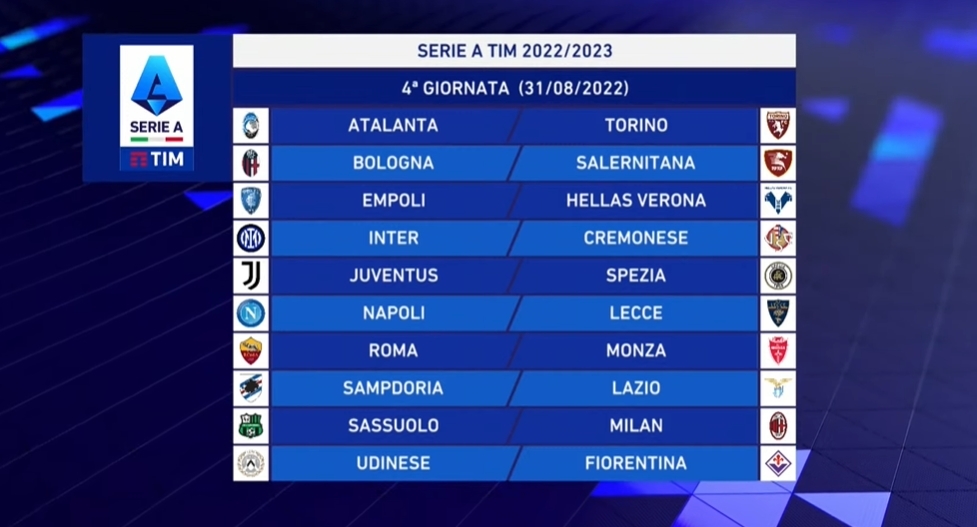 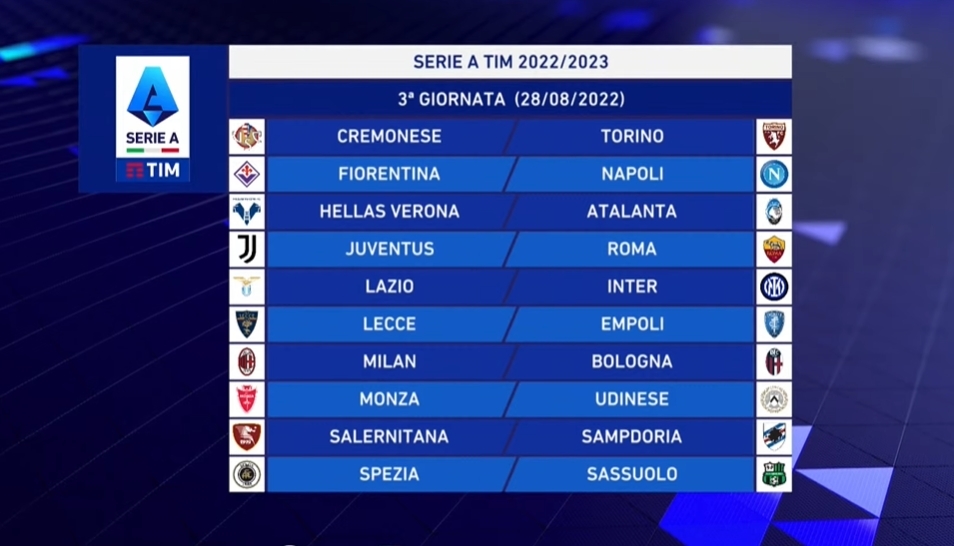 12:19 The second day of the championship was drawn 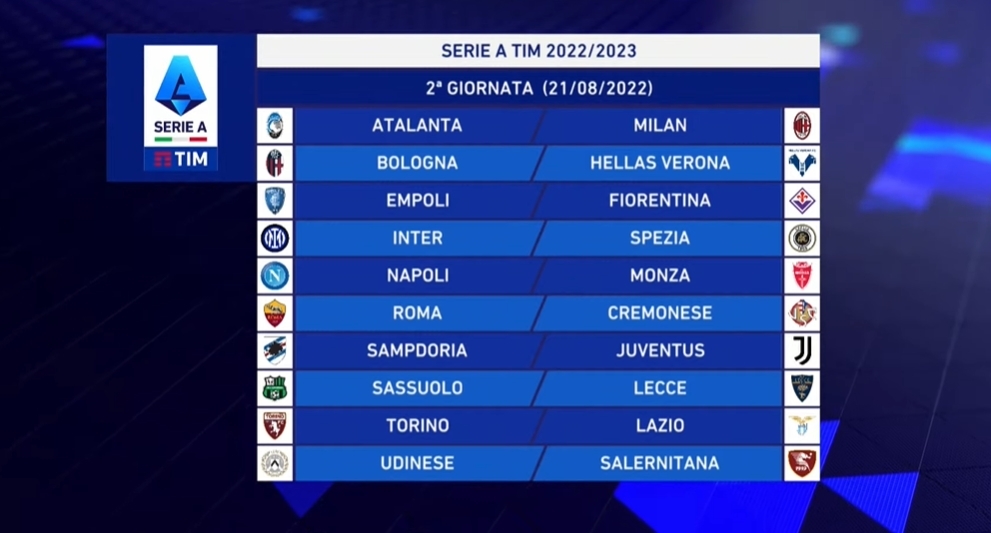 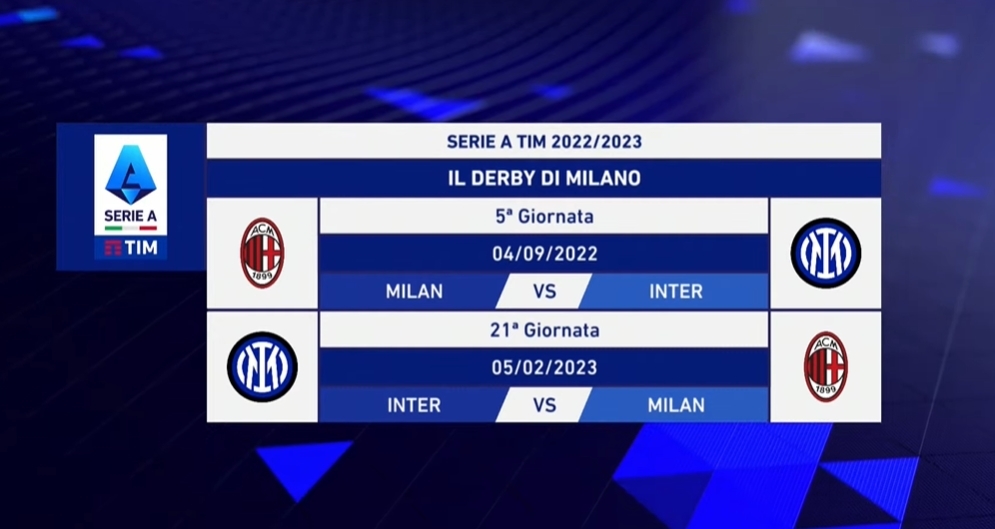 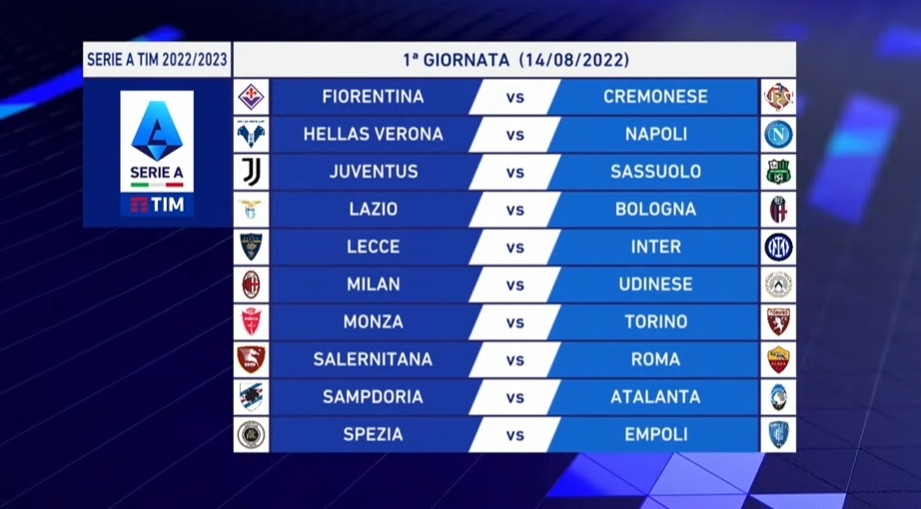 12:14 The countdown for the new Serie A calendar has begun

12:12 Presented the new Serie A “Orbita” ball signed by the technical partner Puma 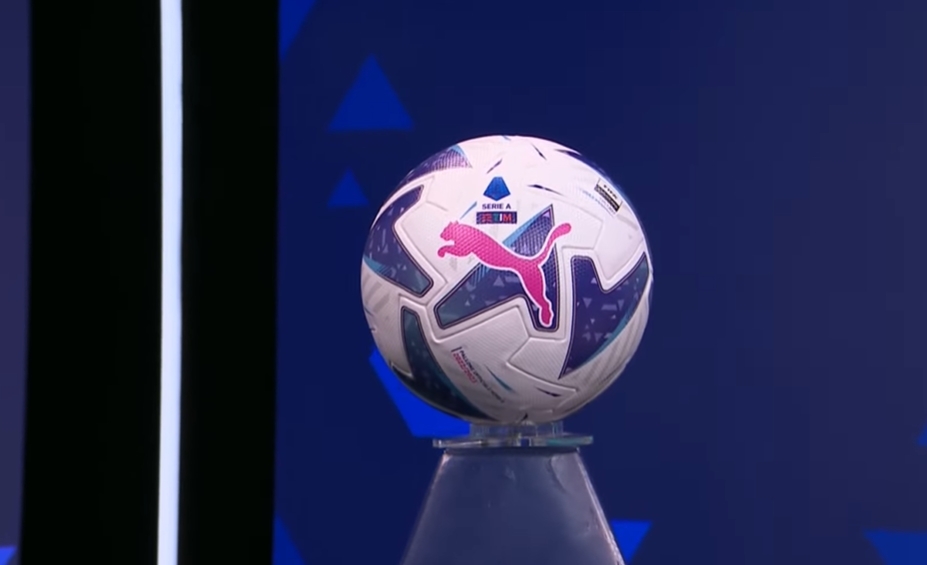 12:10 Casini, president of Lega Serie A, is satisfied with last year’s numbers: «Our championship, last year’s, was at the same level as the Premier League. Especially for the emotions of the last day. Too bad we lost the Derby della Lanterna between Genoa and Sampdoria “

12:08 The criteria with which the days of the Serie A 2022/23 championship will be formed are explained 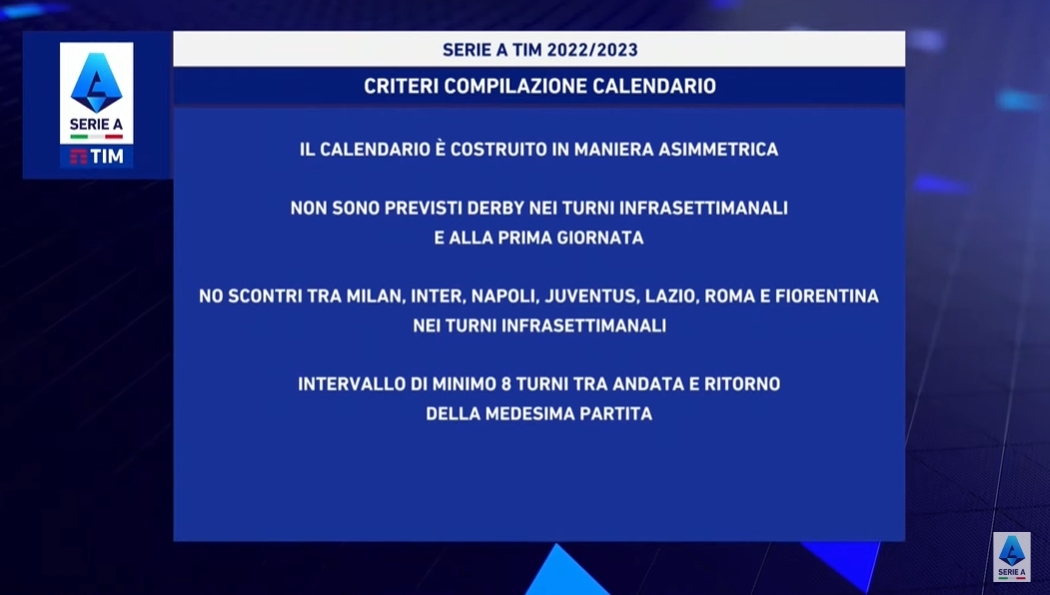 12:05 Pazzini, in the studio, conveys his emotion as a former football player: “It’s always nice to see the days of the upcoming championship take shape”

The dates of the Serie A championship

It will start on the weekend of 13-14 August, with four days to be played by the end of the month. There will be four midweek rounds and there will instead be two breaks for the national teams (at the end of September and at the end of March) but the main novelty concerns the stop for the World Cup: Serie A will play the last day on November 13, with the break that then it will begin on November 14 with the championship which will then officially restart on January 4 2023. Furthermore, the asymmetrical calendar has also been confirmed, with the second round matches in a different order, both as a sequence and as a composition within a day , compared to the first leg. The championship will end on June 4, 2023.

Schedule, the constraints of the draw

The League has announced the constraints and criteria that will be respected in compiling the matches. Among the criteria, there is an absolute alternation of home and away matches for Empoli-Fiorentina, Inter-Milan, Juventus-Turin, Lazio-Rome and Naples-Salernitana. Also, a match will not have its return until another 8 matches have been played. The League has foreseen that clashes between Milan, Inter, Naples, Juventus, Lazio, Rome and Fiorentina cannot be scheduled in the midweek rounds, just as there are no derbies in the midweek rounds and on the first day. Finally, the clubs participating in the Champions League (Milan, Inter, Napoli, Juventus) do not meet the clubs participating in the Europa League (Lazio and Rome) and the clubs participating in the Conference League (Fiorentina) in the championship days between two consecutive rounds of European Cups. In all cases where this has been possible, the League has taken into account situations of unavailability of the field and / or concomitance with other city events of special importance.

Gas, ok Europe Spain and Portugal will pay less for energy: that’s why

Henrikh Mkhitaryan does not intend to leave Serie A.

The US will auction one of Raúl Gorrín’s apartments in New York, according to Reuters

Boca – Ferro: what time do they play, TV channel, how to watch it online and formations

Consumer credit: The lack of liquidity at the origin of the suspension