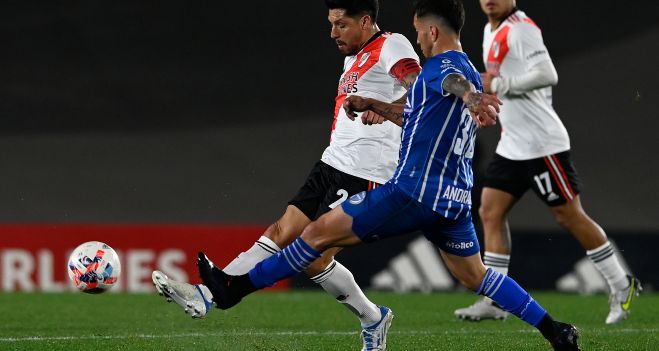 
After being eliminated at the hands of Vélez in the Copa Libertadores, River Plate cannot wake up: they lost 2-0 to Godoy Cruz at the Monumental for the seventh round of the Professional League. Martín Ojeda and Gonzalo Abrego scored for the Mendocinos, who achieved their first victory as visitors of the tournament. The homeowner, now without Julián Álvarez and Enzo Fernández, and with Matías Suárez injured and Maidana suspended, once again exhibited a pale image, far from the best times of the Gallardo era, who ended up being expelled.

With pressure at the start and standing as equals, as they did in La Bombonera last tournament, Tomba bothered the Millionaire, who was forced to look long for Beltrán and Romero, almost unable to make a stopover in midfield. He only saw some clarity when Aliendro managed to free himself from the mark.

On the other hand, the visit, with a lot of mobility and a direct game, taking advantage of the local’s online brand, was deep in offense. At 16 minutes, an Abrego center was almost deflected in the small area. At 7, Allende headed forward, but his attempt went wide. And at 20, he hit: Ojeda leaked between the centrals, put the body to González Pirez and defined. The assistant Vázquez scored offside, although the VAR corrected it correctly: 1-0.

And the Band could hardly react. Because at 23 the Mendocinos reconnected at speed and shouted again. Bullaude stretched for Ojeda to advance from the left, who crossed and found the booty for Abrego, who sealed the 2-0.

The scenario could have been worse for the homeowner: González Pirez should have been expelled for an iron shot for which he only received a yellow card (and the VAR did not call the referee to review). And he was barely able to generate through some stopped ball, at 29, when the former Estudiantes center-back connected a center and the well-placed Russian Rodríguez caught the ball.

The game winked at River before the break, with the controversial expulsion of Ferrari for a double yellow card.

Gallardo wasted no time: he made four changes at halftime. David Martínez, Yacaré Herrera, Santiago Simón and Esequiel Barco entered. He later completed the operation for the comeback with Juanfer Quintero. Before a rival who sought not to get behind, he had to sharpen his wits to hurt. When Aliendro, Simón and the Colombian talked, the gaps appeared.

There came the Russian Rodríguez. At 8 and 15, to cover against Aliendro and Simón. At 18, before a header at point-blank range from Beltrán. And at 21, in front of a shot by Paulo Díaz.

But the clock worked in Tomba’s favor, even though he wasted several promising aftershocks. He knew how to block his opponent’s paths and gain time generating fouls, especially from Ojeda. Except for the change of disposition in the meeting, the man of more than River was not noticeable.

Natural Viagra: the weed that attracts passion and is all the rage among tourists

Nacho Viale would be very complicated with El Trece: “It’s a theme”

Goes to Qatar: Mario Gotze, the “villain” of the Argentine National Team in 2014, will play the World Cup with Germany