(REFERENDUM – SIGNATURES ARE STILL BEING COLLECTED!) Until tomorrow, you can submit your signature against the hijacking of RTV, against the destruction of the long-term care project and against the bureaucracy! 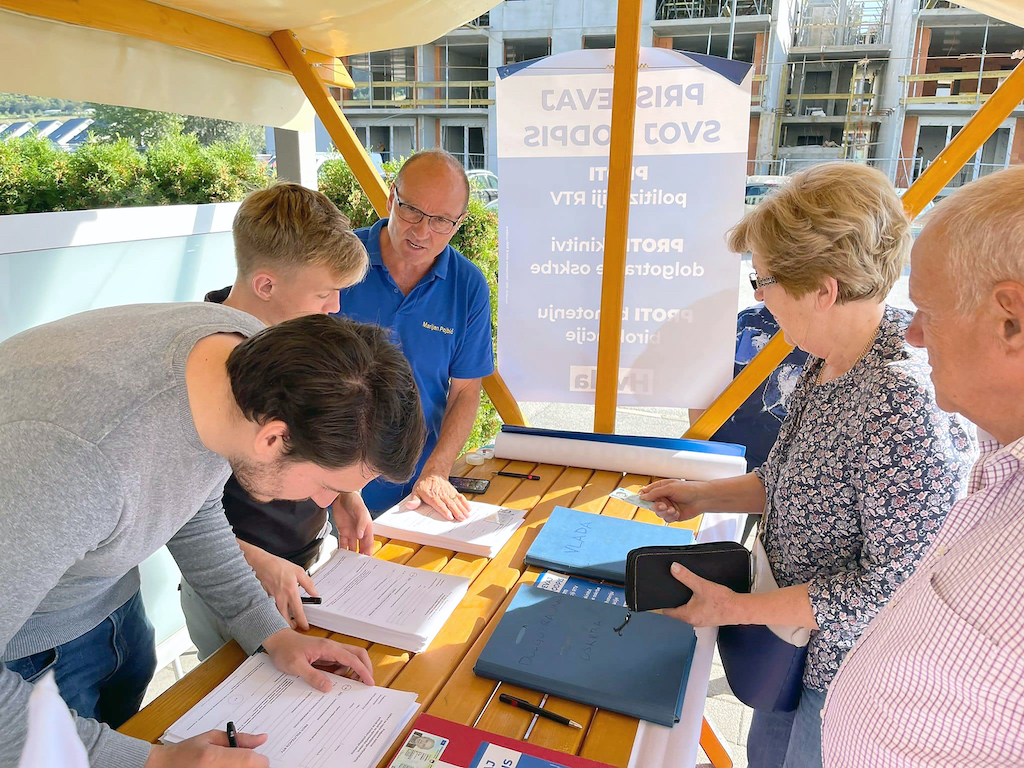 (REFERENDUM – SIGNATURES ARE STILL BEING COLLECTED!) Until tomorrow, you can submit your signature against the hijacking of RTV, against the destruction of the long-term care project and against the bureaucracy!

As it turns out, there are still a few thousand signatures missing from the required number. If 40,000 signatures are not collected by October 5, all efforts will be in vain. That’s why your signature is very important, so that the referendum will be able to decide on some unseemly actions of the current government, which would like to expand the tentacles of the bureaucracy, politicize RTV Slovenia and abolish long-term care in the long term, a project for which many have worked for many years, Golobova and the coalition cancels it practically overnight.

The Act on Amendments to the Act on the Government of the Republic of Slovenia recklessly increases the number of ministries from 17 to 20, which consequently means higher costs and burdens for taxpayers.

Why is it necessary to oppose such a law? Mainly because there is no meaningful rounding of areas after the amendment of the law. At most, it would make sense to shrink the number of ministries, but not to increase them. From the bill and from the public announcements about who would occupy the ministerial positions in the newly established portfolios, it is only clear that unelected politicians must be provided with well-paid jobs. The proposed number of ministries also does not follow the international regulation of the countries listed in the explanation of the law. It also does not bring efficiency, but only a greater possibility of disagreements, as well as more bureaucracy in a country that is already suffocating under a bunch of different regulations.

Also, based on the opinion of the Legislative and Legal Service of the National Assembly, the law is controversial from the point of view of legal security. It is also a fact that the increased number of ministries and artificially divided portfolios will not contribute to the effective, operative and responsible work of the government.

The essential change to the law on RTV Slovenia is primarily the dismissal of the members of the existing program and supervisory board and the introduction of a single management and supervisory body – the RTV Slovenia Council. So, the system as we already knew it in the past, when a virtual civil society managed RTV through a corporate system and when this body was led by a politician, the former president of SD. As is well known, just such a “non-political” RTV Council twice dismissed RTVS General Manager Žarko Petan illegally and for political reasons already in the 1990s.

When amending the law on the government, the sole purpose is therefore the immediate takeover of RTV Slovenia’s management bodies and thus the subordination of the public institution RTV Slovenia to the ruling policy. Much decision-making power at RTV would be given to non-governmental organizations that have nothing to do with RTV, and the amendments to the law would abolish the participation in RTV authorities of representatives of listeners and viewers, i.e. those who finance the “contribution of RTV”.

So why oppose such a law? Because he recklessly introduces a new management and control body, which, under the guise of depoliticization, abolishes the program and control council, which ensures impartiality and balance; whereas the adoption of the law following an urgent procedure prevents the public and interested stakeholders from giving their views, ideas, proposals and initiatives, thus abusing the process to achieve the political goals of the ruling coalition, which, together with some trade unions, has been planning a political takeover of a public institution for a long time RTV Slovenia, because it does not guarantee respect for the principle of reality, impartiality and integrity of information and because it does not guarantee respect for human personality and dignity, the principle of balance and worldview pluralism. The new law on RTV therefore politicizes the mentioned public institution under the guise and not the other way around!

The Long-Term Care Act was finally adopted at the end of 2021 after more than twenty (!) years. It is a law that regulates the field of long-term care by ensuring the conditions for accessible, high-quality and safe treatment of adults who, due to illness, age, injuries or disability, are no longer able to take care of themselves independently. The Long-Term Care Act brings hope to all citizens that they will not be left alone and without medical care and assistance in their old age.

The current government under the leadership of Robert Golob wants to delay the implementation of the law by one year, which would also stop solving problems in the field of long-term care. Statements by the ruling party that maintenance fees will be higher due to the announced referendum, they don’t hold. It’s just plain intimidation!

Why oppose the delay in the implementation of the law? Because this would jeopardize the payment of grants in the amount of 1.5 billion euros! Also, amendments to the long-term care law would abolish the establishment of a single point of entry, which would further centralize information in the field of health, social care and long-term care, and make the procedures as simple as possible for excused persons. These changes, which are being prepared by the government, would abolish the introduction of a uniform assessment of eligibility with the aim of unifying the method of assessment and that, as a result, beneficiaries with comparable needs have access to comparable rights; the introduction of new services is suspended, so that beneficiaries in all environments can access comparable services and that services for strengthening and maintaining independence and e-care services are also provided. The changes to the law will abolish the establishment of effective control of the quality and safety of long-term care services, which means that the individual pays less for the necessary services, and it is also planned to reduce the financial burden on local communities.

These changes will also end the improvement of planning, management and quality assurance, safety and efficiency of the provision of long-term care as a public service. Planning, management and ensuring the quality, safety and efficiency of long-term care as a public service will be discontinued, as well as the possibility for the beneficiary to remain in the home environment as long as possible with appropriate assistance. Caring for the elderly is not only our duty, but also an expression of social development, responsibility and empathy. It is a reflection of respect for the people who took care of the development of this country, who worked and who built Slovenia.

IMPORTANT: How to submit a signature of support for the referendum call?

Send the form completed and signed and authenticated at the administrative unit or local office to the address Slovenska demokratska stranka, Trstenjakova 8, 1000 Ljubljana or leave it at the stand of the SDS Municipal Committee in front of the administrative unit or local office. Support for referendum initiatives can also be submitted via e-Government with a digital certificate.

The easiest way is to go to the SDS stand during office hours at the branch of the Administrative Unit (UE), pick up the form there, fill it in and then verify it at the UE itself. Have your ID with you. You then return the form filled in and confirmed by UE to the stand. It won’t take you much time. And as mentioned: you can also submit the signature digitally via e-administration.

We thank you for your signature, because only through referendums can we prevent the adoption of harmful laws. Every vote counts!

The 3 new features that are coming to WhatsApp that you have to know Techno March 08, 2022 WhatsApp has already started testing three new features in its Beta versions that could reach the more than two billion users of this application in the coming months.

Germany in a “critical situation” in the face of covid

The “Rehabilitation Medicine Interprofessional Training” program has been launched

Killing Korean Band and Mobile Addiction; How can we save our children?