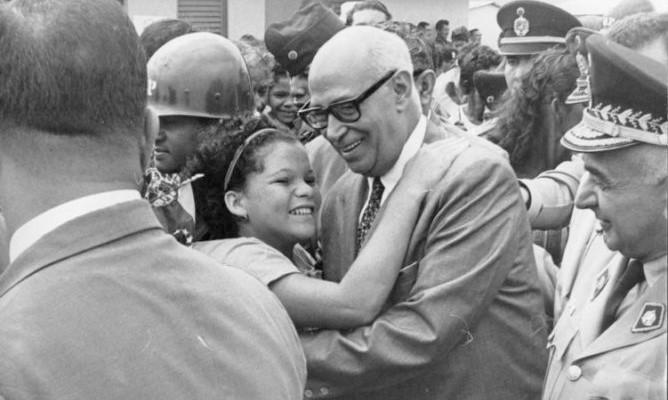 
“By leaving the gates of Miraflores behind me, I am not leaving anything that could disturb my spirits or frighten my conscience” (Raúl Leoni, March 5, 1969. V and last Presidential Message to the Congress of the Republic).

The generation of 28, of which Raúl Leoni was an enlightened leader, enters history, leaving a deep mark on the Venezuelan twentieth century.

In the international order, after the century of peace that followed the end of the Napoleonic wars, the First World War had occurred, changing the map of Europe and elevating the United States to the hierarchy of the world’s leading power. The Russian Revolution of 1917 had triumphed, which dazzled the youth of the planet when they read John Reed’s “10 days that shook the world”. Fascism had come to power in Italy on October 30, 1922, when King Victor Emmanuel III, frightened by the buffoonish March on Rome, appointed Benito Mussolini as head of the government. Hitler had already published his book “My Struggle”, written in the Landsberg prison, where he was confined after the failure of the Munich putsch of 1923. Here in America, the Mexican Revolution raised its claim to land and freedom; and the University Reform of Córdoba (Argentina) waved the flags of autonomy and academic freedom to the winds.

In the internal, national order, the primitive and brutal dictatorship of Juan Vicente Gómez had continued for 20 years. Venezuela was a country of 2,500,000 inhabitants, agricultural and pastoral, with a predominance of large estates as the land tenure system. Oil was exploited through the system of concessions granted to foreign capital and by 1926 the value of hydrocarbon exports had surpassed the value of coffee and other traditional product exports. That reality of the Venezuelan economy is portrayed in the famous Barranquilla Plan (March 22, 1931), signed, among other leaders, by Raúl Leoni.

Broadly speaking, that is the historical context in which the generation of 28 bursts. There were no political parties and it is the FEV (Federation of Students of Venezuela), the body that brings together and directs the opposition to the tyranny, and, precisely, Raúl Leoni was its president. It was decided to celebrate the Student Week between February 6 and 12, 1928. On the night of the 6th, as President of the FEV, Raúl Leoni crowned the student Queen Beatriz Peña Arreaza, Beatriz I, at the Municipal Theater of Caracas. , to whom the poet Jacinto Fombona Pachano reads a poem and, in a parable that is not properly biblical, that anyone could understand, tells him that “we did not accept more yokes than those that came from his hands.” On Saturday the battle of the flowers takes place in the streets of the city, and on Sunday the 12th Student Week closes with a dance in honor of Queen Beatriz I at the “Club Venezuela”, the same club in whose halls Rómulo Betancourt recalls that he has cordialized the Caracas oligarchy with Gómez’s “chácharos” after they learned “to drink champagne without spilling it entirely on the front of the tailcoat”.

On February 14, two days after the student rebellion disguised as a party ended, Rómulo Betancourt, Jóvito Villaba, Guillermo Prince Lara and Pío Tamayo were arrested and taken to the “El Cuño” prison in La Pastora. After tumultuous assemblies and useless efforts to obtain the freedom of their companions, in solidarity with them, around 300 students of the FEV and its President Raúl Leoni, surrender to voluntary prison, and are taken, along with those who were already prisoners in “El Cuño”, to the Libertador Castle of Puerto Cabello. After refusing to sign a letter to the “respected general” that was proposed to them in exchange for their freedom, the students, thanks to popular protests, were able to return to Caracas free.

Later, the military uprising occurred on April 7 of the same year 28, which was frustrated by not being able to take the San Carlos Barracks, but Raúl Leoni could be seen “with his rifle in his hands, risking his life in a beautiful and romantic gesture of youthful audacity”, as pointed out by Rigoberto Henríquez Vera in the book “Leoni, a human condition” (page 209). He goes into exile.

On December 17, 1935, Gómez died, and Leoni returned to the country in January 1936. General Eleazar López Contreras was the new president. Leoni participates in the formation of ORVE (Venezuelan Organization), and the PDN (National Democratic Party), whose legalization is denied by the government. He is one of the 47 leaders of “the left” expelled from the country for a year by government decree of March 13, 1937. In Bogotá, on December 6, 1938, he graduated with a doctorate in law and social sciences.

Coming from Bogotá, Leoni returned to Venezuela in June 1939. He joined the clandestine PDN, and when Rómulo Betancourt went into exile for Chile on October 20 of that year, it was Leoni who replaced him as Head of the General Secretariat of the PDN. In 1941 he shared the political leadership with the trade union consultancy and supported the “symbolic” presidential candidacy of Rómulo Gallegos.

Under the government of General Isaías Medina Angarita, the PDN was legalized under the name Acción Democrática on July 29, 1941 by the Governor of the Federal District, Dr. Luis Gerónimo Pietri. Great meeting of Democratic Action in the New Circus of Caracas on September 13, 1941, which is adopted as the founding date of the party. Sections of the Organization are created throughout the national territory, with the active participation of Raúl Leoni. Four years of opposition to the Medina government, which also founded his own party, the PDV (Venezuelan Democratic Party).

As Medina did not support the consecration of universal, direct and secret suffrage in the constitutional reform during the 1944 and 1945 sessions of the National Congress, and the candidacy of Diógenes Escalante disappeared due to his mental illness, before the imposition by Medina, as “great elector ”, of the candidacy of Angel Biaggini, to which was added the existing military malaise, was inevitable and the Revolution of October 18, 1945 was historically justified. Leoni was a member of the Revolutionary Government Junta presided over by Rómulo Betancourt, and Minister Labor, a position he continued to hold in the Constitutional Government of Rómulo Gallegos. During that ministerial administration, the 222 existing unions in the country increased to more than 1,000 unions, and the first oil collective agreement was signed (May 30, 1946).

When Rómulo Gallegos was overthrown on November 24, 1948, Leoni was imprisoned, along with the other ministers, and remained in the Model Prison in Caracas until July 17, 1949, when he began his third and last nine-year exile. . On August 20, 1949, he married Carmen América Fernández Alcalá, “Menca”, in Washington, with whom he has five children: Carmen Sofía in Washington, Luisana, Raúl Andrés and Lorena in Costa Rica, and Álvaro was born in Caracas, when the couple He has returned from exile.

On January 23, 1958, the dictatorship of Pérez Jiménez is overthrown. Provisional Government presided over, successively, by Wolfgan Larrazábal and Edgar Sanabria. Victory of Rómulo Betancourt in the presidential election of December 7, 1958, and Raúl Leoni becomes President of Democratic Action, and since he was elected senator for the State of Bolívar, he is President of the Upper House for three periods of sessions until March 1962.

On July 13, 1963, the XIII National Convention of Democratic Action chooses Raúl Leoni as its presidential candidate for the elections on December 1 of that year. He triumphed, and carried out a great work of government in the period 1964-1969 which, in the opinion of one of his biographers, Rafael Arráiz Lucca, concluded “in the midst of significant economic and social achievements…The results in figures of the Leoni government are, in many ways, amazing…”. Such results are collected in its Annual Messages to the Congress of the Republic.

On July 5, on the occasion of the 50th anniversary of the death of former President Leoni, there will be a presentation of the book “Raúl Leoni, democracy in the storm”, whose author is the historian Tomás Straka. Time: 11 a.m. Late Night Theatre. CC Paseo Las Mercedes, basement.

Is the total breakdown of the Frente de Todos coming?: Alberto Fernández would analyze changing the head of YPF

Buenos Aires: one of the cities most chosen by foreigners to learn Spanish

Bats are not the only source of many animal diseases

Barcelona shines 4-0 in the classic against Real Madrid