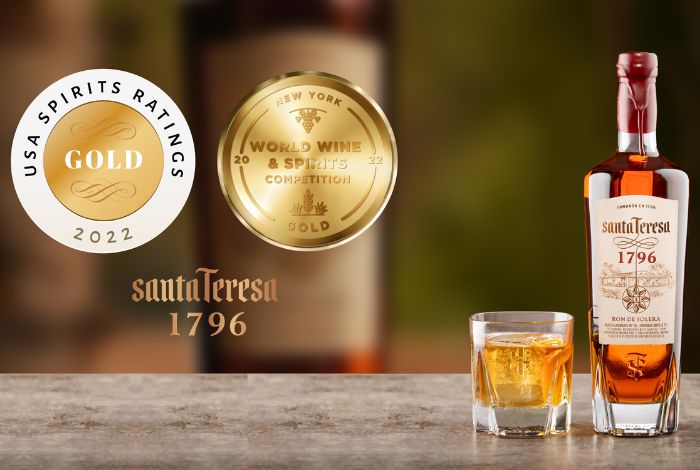 The winners of three important competitions in the world of cocktails were announced, in which Saint Therese 1796 emerged victorious by winning gold medal in the USA Spirits RatingsHe also won a gold medal in New York World Spirits Competition (NYWSC) and silver medal in his first participation in The Travel Retail Masters.

“On this occasion Santa Teresa 1796 is awarded in two of the focus markets for the business, the United States and the United Kingdom, this fills us with pride because it is also the first time that the NYWSC awards us the gold medal and recognizes the quality of the venezuelan rum”, said Alberto C. Vollmer, executive president of Ron Santa Teresa.

In the 2022 edition of the USA Spirits Ratings, Saint Therese 1796 he got 90 points and got the gold medal. This competition features a panel of 21 judges, considered leaders in high-end spirits buyers and with responsibilities directly related to the current commercial purchase.

In USA Spirits Ratings, liquors are evaluated based on quality and appearance. This competition, held in San Francisco, begins with a blind tasting by the judges and then the appearance of the bottle and packaging is scored.

In the case of the New York World Wine and Spirits Competition, Santa Teresa 1796 won a gold medal for the first time, in addition to the three silver medals it has accumulated from previous editions. This is a 3-day competition held at the Ace Hotel in Brooklyn, New York. NYWSC is one of the most prestigious competitions in the world, because its judges are some of the most prominent experts in the industry today. This competition is not only based directly on the quality of spiritsbut on the flavors and inclinations that drive the market of this industry.

Santa Teresa 1796 accumulates more than 70 medals in various international competitions since its launch. This year, the Santa Teresa house rum he has been awarded the gold medal at the Rum & Cachaça Masters in London, at the International Spirits Challenge and at the Virtus de Lisboa; with a silver medal at the Bartenders Brand Awards, at the London Spirits Competition, at the San Francisco Word Spirits Competition and at the Beverage Testing Institute in Chicago; in addition to being recognized with the bronze medal in IWSC and recommendation in the Ultimate Spirits Challenge.

Santa Teresa is the first rum producer in Venezuela, which has been transforming crises into opportunities for 225 years and has been recognized for the quality of its liquids and for its social investment initiatives, in the Revenga Municipality of the Aragua state. Its products proudly display the Controlled Designation of Origin Ron de Venezuela and are present in more than 90 countries around the world.

Seven silent symptoms of stroke to watch out for

Gymnastics moved away from the tip