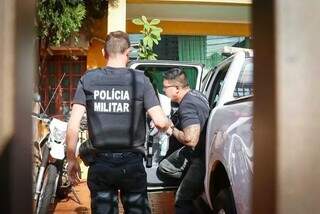 
Aguinaldo Medina, 42, PM-MS (Military Police of Mato Grosso do Sul), arrested in April this year for facilitating the entry of drugs into the Maximum Security prison in Campo Grande, was sentenced to 13 years in prison.

He was tried by the Military Audit on Tuesday afternoon (20). The session was chaired by Judge Alexandre Antunes da Silva. The decision considered that the accused took advantage of the moments when he had to carry out surveillance of the Prison to allow the criminal practice, which is why he set a sentence of 5 years imprisonment for the crime of passive corruption, and 6 years and 6 months of imprisonment. .

Altogether, Aguinaldo was sentenced to 13 years and 4 months of detention and the payment of a fine of 950 (nine hundred and fifty) days, starting his sentence in a closed regime.

Understand- The scheme to facilitate the entry of drugs into Máxima de Campo Grande, Jair Ferreira de Carvalho prison, was the target of an operation in April this year. At the time, the third sergeant Aguinaldo Medina, who worked in the Guard and Escort Battalion, was arrested.

According to the complaint by the MP/MS (Public Ministry of Mato Grosso do Sul), the police officer received R$ 22,650 through PIX passed on by people linked to the penitentiary system. The bank secrecy breach period was from December 1, 2021 to January 31, 2022.

The throwing of drugs into the prison, in Jardim Noroeste, was verified after the arrest of a drug dealer on January 7 of this year. Military police seized marijuana rolled into a ball. The explanation was that the drug was intended for prisoners and that he paid BRL 1,000, through a third party PIX, to Medina.

Danilov on the destruction of secret materials by the State Bureau of Investigation on Maidan cases and the Kharkov agreements: If Sukhachev gave the order, he will personally answer

Does our brain change when we exercise?

Ullum lives his dream with San Lorenzo: from spending 24 years in the “B” to playing a Regional

“So real”, “Beauty”. Kamensky starred in an ultramini. A photo