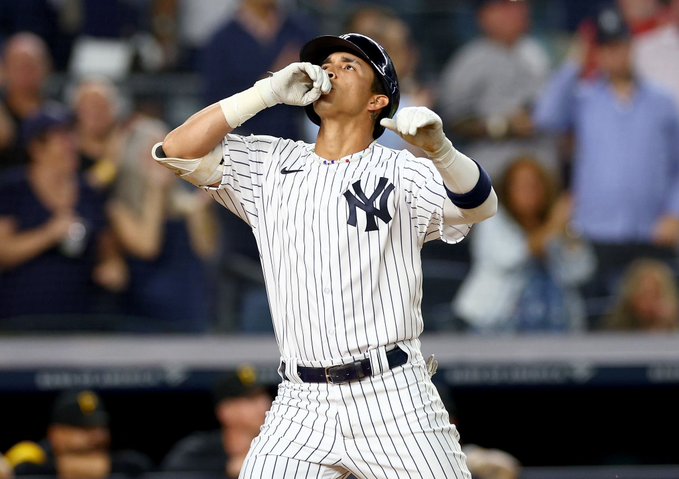 
Oswaldo Cabrera has become the new sensation of the New York Yankees since his debut a month ago in the Major Leagues. The Venezuelan from that moment has reached historical marks of the organization.

In Wednesday’s game against the Pittsburgh Pirates, the Venezuelan hit his first grand slam of his Major League career in the first inning, and after that he hit a long double to drive in another run and thus reach 5 in the match.

Oswaldo Cabrera in this way got his first game in the Major Leagues, driving in five runs in one game. The Venezuelan continues to take firm steps to be taken into account for the postseason.

Torres got back into the historic Yankees lists. This time he did it Wednesday night, after getting the ball out a couple of times in the eighth inning in the middle of an eight-run rally.

The first full-round shot was a solitary one, coming off Torres’ bat at 102.2 mph against a four-seam fastball from countryman Miguel Yajure and traveling 355 feet out of right field.

The second, off a fastball from southpaw Eric Stout, found two teammates in circulation. The ball was shot at 106.7 mph and was projected 398 feet, leaving the confines of the park in left field, according to Statcast calculations.

It was Torres’ 13th career multi-home run game, tying the Yankees’ record for a middle infielder (shortstop/second baseman), from 1903 to present, according to @StatsCentre.

Robinson Cano also compiled 13 with the Bronx Bombers. Both are escorted by Hall of Famers Joe Gordon (12), Derek Jeter (10) and Tony Lazzeri (9).

Torres drove in his first run of the game in the fifth, with a single, to add five in the challenge, one short of his personal record (08/12/2019).

Abdoulaye Diop: “Togo is, and remains a successful country in terms of the implementation of policies, reforms and the execution of WAEMU programs”

Total Lunar Eclipse: when and where it can be seen from Argentina

After the fire, boarding at Parque Pte. Sarmiento