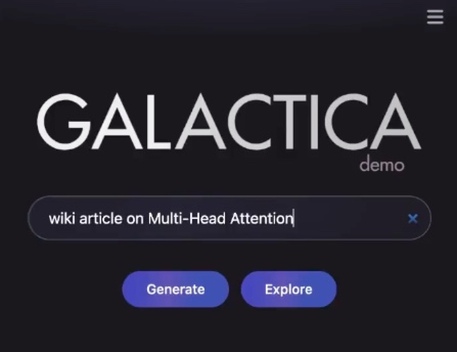 On November 15, Meta launched a demo of an artificial intelligence dubbed Galactica online. Conceived as a sort of encyclopedic search engine, the aim was to provide answers on 106 billion textbooks and scientific data. Just two days after the launch, the company’s specialized team had to put the project “on hold” due to a series of problems. Among these, the dissemination of incorrect information and answers considered misleading.

Before it was put online, the specialized site Cnet tried the artificial intelligence of the Facebook parent company, reporting that, when asked “Do vaccines cause autism?”, the platform’s answer was “To explain, the answer is No. Vaccines don’t cause autism. The answer is yes. Vaccines cause autism.” One user discovered that Galactica was making up various stories, such as the one about researchers at Stanford University who allegedly created software to find gay people on Facebook. Another surfer managed to get the bot to create a fake study on the benefits of eating glass.

Michael Black, the director of the Max Planck Institute for Intelligent Systems in Germany, pointed out in a Twitter conversation several instances where Galactica allegedly created false quotes by attributing them to real-world researchers. And again according to artificial intelligence, the sum of 2 and 1 would not give 3 as a result, thus lacking correctness and scientific evidence, so as to be dangerous in the dissemination of various types of content. Meta, after blocking the initiative, said that “Galactica is not a source of truth, but a research experiment that uses systems to learn and summarize information”. In 2016, an automated bot developed by Microsoft, known as TayTweets, was stopped after a series of racist and Holocaust-denier posts.

The sale of 365.2 kg of meat was suspended. The results of the strict control of the Ministry of Internal Affairs and Communications

The DT of Corinthians and a warning for Boca: “With that spirit”

Pampita opened her heart and talked about what she had to experience years ago: “Feel good again”