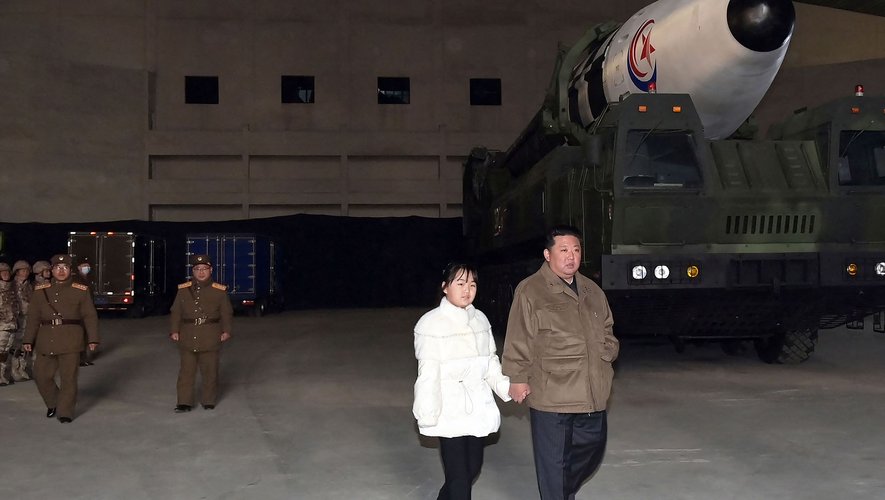 
the essential
Kim Jong-un appeared this Saturday, November 19, alongside a young girl whose age and name are not specified, dressed in a white down jacket and red shoes. This is the first official confirmation of her daughter’s existence, experts say.

North Korean leader Kim Jong Un supervised the launch of his latest intercontinental ballistic missile accompanied by his daughter, whose existence is thus revealed to the world for the first time, in a message published this Saturday, November 19, by the agency of State KCNA. Amid growing tensions on the Korean peninsula, Kim also reaffirmed that he would use the atomic bomb in the event of a nuclear attack on his country, after the Hwasong-17 was launched on Friday “successfully”, according to KCNA.

His “beloved wife and (of his) daughter”

This “test firing clearly proved the reliability of the new major strategic weapons system”, commented the state media. The United Nations Security Council said on Saturday that it would meet on Monday to discuss the situation. Calling on the UN body to “respond appropriately”, the European Union condemned “a dangerous, illegal and irresponsible action”.

Extremely rare, KCNA, the sole source of information from Pyongyang, mentioned the family of Kim Jong Un, stressing that the leader had gone to the launch accompanied by his “beloved wife and (his) daughter “.

Kim appeared alongside a young girl whose age and name are unspecified, wearing a white puffer jacket and red shoes. This is the first official confirmation of her daughter’s existence, experts say.

The North Korean regime had never previously confirmed the existence of a family of the leader. The South Korean intelligence services assure that Kim married Ri Sol Ju in 2009, who gave birth to three children between 2010 and 2017, without specifying the gender.

For Cheong Seong-chang, a North Korea specialist at the South Korean Sejong Institute, it could be Kim’s probable second child, Ju Ae. In 2013, the former star of the NBA, the American basketball league, Dennis Rodman, visiting Pyongyang, had given a rare testimony of the existence of this child, whom he had met.

The fourth generation of Kims

His appearance revives speculation about a future dynastic transfer of power in North Korea, where Kim Jong Un succeeded his father Kim Jong Il and his grandfather Kim Il Sung.

According to Soo Kim, a former analyst with the US intelligence agency CIA, Friday’s launch testifies to “the permanence of the Kim regime’s weapons program, as it is integral to its own survival and the continuity of the regime’s rule. his family”. “It even partly answers questions surrounding the succession,” the analyst, now at the RAND Corporation, told AFP.

“We have seen with our own eyes the fourth generation of Kims. And his daughter – as well as other possible siblings – will certainly be groomed by her father,” she noted. For KCNA, the last missile launch on Friday confirms “that once again the nuclear forces of the DPRK (acronym of the official name of North Korea editor’s note) have reached a new reliable maximum capacity to contain any nuclear threat”.

The United States, South Korea and Japan have stepped up joint military maneuvers in recent months since Kim Jong Un declared in September that North Korea’s nuclear state status was “irreversible”. Seoul and Washington notably conducted the largest joint air exercises in their history in late October and early November.

On Saturday, the South Korean army announced that an American B-1B bomber had been redeployed to the Korean peninsula, as part of new exercises between the two allies. But North Korea sees these shows of force as general rehearsals for an invasion of its territory or an attempt to overthrow the regime.

Environment: soon an “eco-score” for clothing?

“Talk to the fart”: Damonte struck down Martínez after the tie between Sarmiento and Tigre, what happened?

Slimming operations. which species are common in our country, what are the risks and advantages?

DALILA WAS DISAPPEARING INSIDE BECAUSE OF THE EVIL SHE HAD CAUSED DEJANA. Wendy shocked with her statement about Dragojevićka, she also mentioned black magic