Nina Krajnik in the show Arena: The Left is the one who introduced capitalism to the country

Nina Krajnik in the show Arena: The Left is the one who introduced capitalism to the country

“Short-term solutions are a feature of wild capitalist logic, and for the left this is quite simple, as it is the left that has introduced capitalism into the state,” said Dr. Nina Krajnik, philosopher, in the show Arena with host Igor Pirkovič on RTV Slovenia. In addition to Krajnikova, Milan Krek and Miran Videtič were also guests, who also spoke about their own unpleasant experiences with the Slovenian media and violations of freedom of speech, both skeptical about the actual fulfillment of the promises of the new Prime Minister Robert Golob.

In the show Arena on RTV Slovenia, the host Igor Pirkovič hosted dr. Nina Krajnik, a philosopher, Miran Videtič, who was recently banned by the state company ELES from commenting on events in the public or in the media, and NIJZ director Milan Krek, who was recently threatened by the new Minister of Health Danijel Bešič Loredan with the help of the council. dismissed from the post of director. All of the above are serious violations of democratic norms and freedom of speech in a country where restrictions on the freedom and apparent obstruction of the freedom of speech of other thinkers have been taking place recently, ironically, since the Freedom Movement party came to power.

“When you are invited to a show by a public, state service, you simply cannot refuse,” Videtic said of the employer’s ban on appearing in the Hour of Power, saying that he respected their decision, but at the same time made it clear that people from the right professions have reviewed this, ”Videtič said in the introduction. Especially considering that since Robert Golob became prime minister, Videtič has already appeared in two shows of the Hour of Power, where so far they have not found anything controversial that would influence their decision.

Leader Pirkovič continues his conversation with the next guest, dr. Nina Krajnik, who said in the introduction that “freedom already has limitations in itself”, which she illustrated with a quote from Dostoevsky. She went on to say that she had lived abroad for years and that she had pleasant experiences with the media, unlike the experience with the Slovenian media, “seven years since I was at home, the Slovenian media have severely censored me, especially the newspaper Delo seven years ago, I interfered very rudely in an interview, ”Krajnikova said, adding that for years she has been approached by journalists who may want to talk about various topics, but have always stopped at the editors.

She had a bad experience recently, after an interview with dr. Jože Možina, when a few days later journalists violently broke into her home and wanted to show a story they had constructed with a violent gesture. Why this happened, Krajnikova believes that journalists and editors should be asked, but everyone agrees that the reason was fear of the truth. “What’s in the background here, I wouldn’t guess, but it’s true that once you bump into the most compact part of this system, the ideological part, it can happen”.

Milan Krek also described equally good experiences with Koper journalists. sections from the filming, no good, ”he said, adding that the public relations department explained to him that it was not a professional but a political lynching,“ journalists jumped on me and tore me as much as they could because I didn’t have no support anywhere ”.

It was funny until the phrase “public service takeover” came up

It is difficult to blame the private media because there are other interests, while in the state media the matter is completely different, believes Videtič, who as an advocate of freedom of speech and various media even for keeping Studio City so colorful, until Helena Milinkovič mentioned the takeover of RTV, and this is where the matter ended, as “it was no longer a joke”, Videtič is convinced. “Taking over a public service means, at least I see no other reason than to market this public service in some way and it is absolutely not right that politics interferes with the work of a journalist, much less that this journalist offers himself this policy, ”he said, referring to Krek’s case when they wanted to force his resignation,“ exchanges are something normal, but clear arguments should be presented as to why the exchange took place ”. 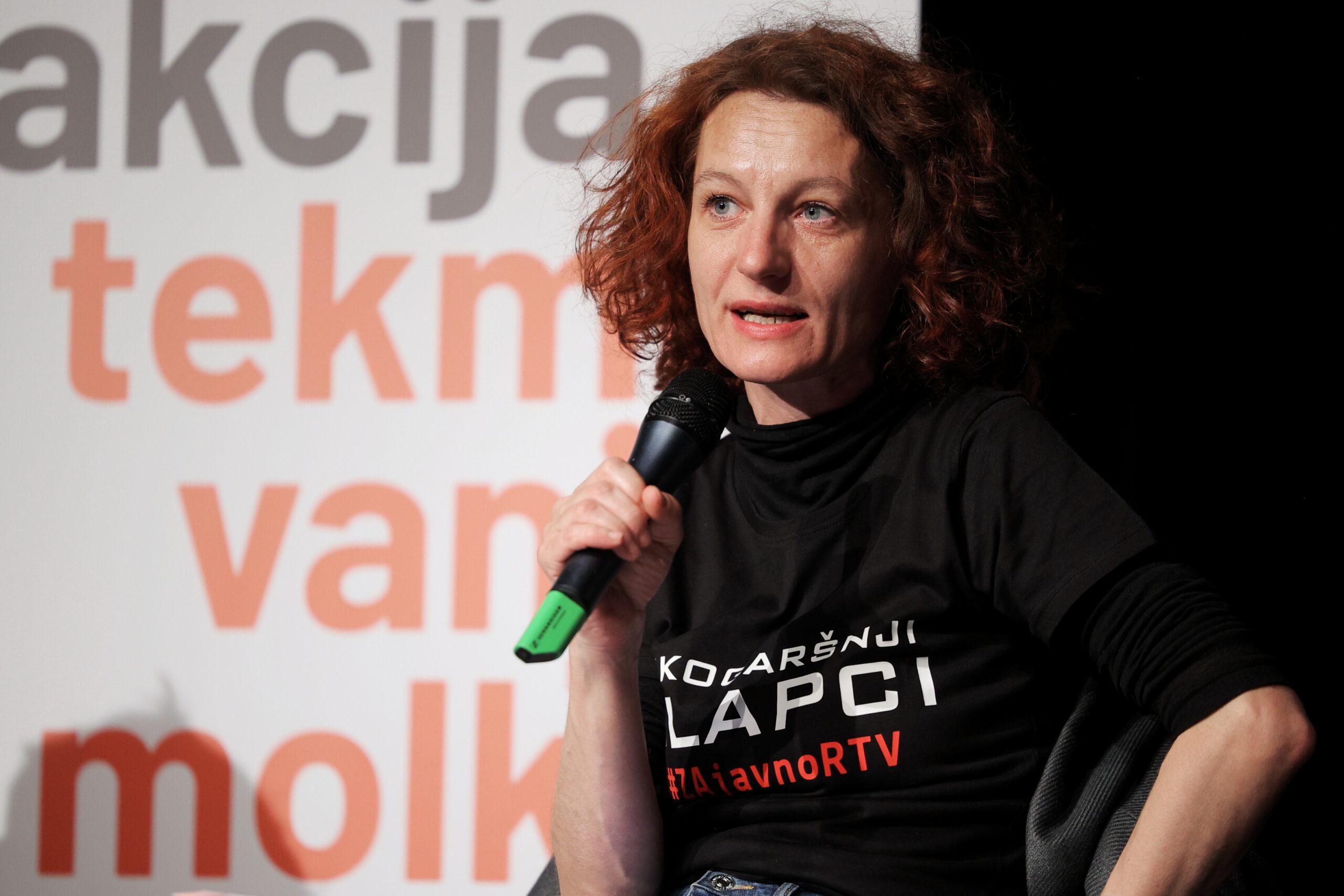 Helena Milinković, head of the Coordination of Journalists’ Unions at RTVS, who announced the “takeover of the public service” (Photo: STA)

Milan Krek remained in his position, but his path was quite thorny, especially due to the media lynching. On the occasion, the leader asks him about the “current form of the NIJZ”, to which Krek replies, “when I came to the NIJZ we had three million and a few minuses at 32 million in revenue, now we have 75 million in this year’s budget, with from 556 people went to 630 ″ he said, adding that from a business point of view they work “fantastic” and also boasted about the successful digitization of systems that have made the job much easier. At the same time, he continues to believe that the profession must be politically neutral, because the institute functions regardless of who the prime minister is and ensures that cooperation with any government is necessary, as required by law. 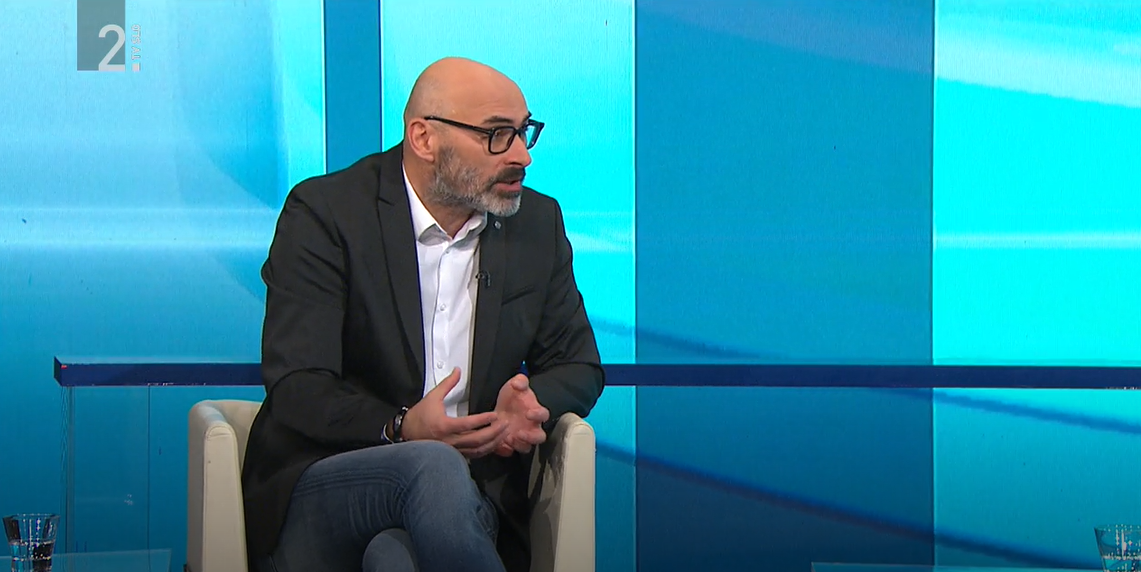 The government will have a hard time fulfilling everything it promised, will the people take to the streets this time as well?
“I don’t know, after all these promises made, whether the government can even deliver on what it promised this street. If this street is moral and correct, it will go back to the street for every matter that has been promised. This same street that we know, Friday’s cyclists and the like, “Videtič is convinced, claiming that this will not happen, because” this street was also part of this fight against a government, Janša’s government, “he said. Seen when the leader touched on the topic of the new government’s promises to the “street”. Given the current situation in Slovenia and the fact that none of their promises have yet been fulfilled, Krek added that “the Prime Minister shook hands with Marko Potrč, who has repeatedly publicly condemned the masks and measures, with he said a lot about it, ”said Krek, who said that he had sent an e-mail to Golob not to speak and promised that the masks would no longer be needed, because this might only be necessary again in the future. At the expense of great promises, Golob got voters, the same as Zoran Stevanović from Kranj, who got 3 percent, but “the facts show the truth that Slovenia did a great job and survived due to the measures”.

Pirkovič says that Robert Golob is being compared to Janez Drnovšek, while Videtič, as a former collaborator with the LDS, believes that he does not see anything LDS in Golob and the Svoboda Movement, because, as he said, “they saw in the LDS people who eventually formed and learned before going a step further and everyone should go first into opposition to learn and point out mistakes, while with Golob it’s a completely different story ”. “Regardless of how people warned and blamed the government of Janez Janša, the results of the last two years are proof that not everything was so wrong,” Videtič is convinced. Krajnikova adds that “short-term solutions are a feature of wild capitalist logic” and wonders why people persist, if the results are always the same in the end. However, how this capitalist logic works for the left, Krajnikova claims, is “quite simple, because it is the left that introduced capitalism into this country.”

The wave of dance will last, but not for long

The guests agree that the demonstrations are not the problem, as they are a reflection of democracy, which has been very strong in the last two years, “is the problem when the newly appointed Minister of the Interior tells you that the organizers and violators will not pay fines, that is, interfering in the work of other institutions and encouraging someone to attack someone else tomorrow “, claims Videtič, who believes that the” wave of dance “will last, mentioning the government of Miro Cerar and Marjan Šarca, however, is skeptical about the two terms, which have been announced several times by the new government. Krajnikova, who is seriously considering running for president, has reaffirmed her candidacy, which has led to the support of many who share her thinking, but is convinced she can offer a lot to people, as her life’s work is based on people’s stories.

A series of British films about growing up in CK13

More than 6,000 trucks began to move to Chile through Mendoza

Analysis / Zelensky leads the oratory’s ‘battle’ against Putin, here is how he manages to touch the hearts of world leaders

The Ambassador of Brazil welcomes the World Cup with a game