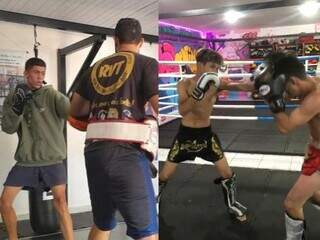 
The NGO (Non-Governmental Organization) Sonhadores, from Campo Grande, is an institution that aims to help the community. It is located on Avenida Rosário Congro, in Bosque da Saúde, in the Vila Nasser region. It was the training ground for two medalists from Mato Grosso do Sul at the 2022 Pan American Kickboxing Championship.

Kawan Bobadilha and Jorge Vera Denguez are 15 years old and won silver and bronze medals, respectively. Both are in the ‘light’ category. The state won, in all, 13 of Brazil’s 297 medals in the competition held in Cascavel, in the interior of Paraná.

The president of the NGO, Milton Kruk, said that the history of the institution began on October 8, 2017 with the support of several donors, in the Segredo creek region. The services offered are assistance to families with donations of food, clothes and shoes.

Encouraging sports is also a hallmark of the NGO Sonhadores. The institution has partnerships with academies for the athletes who are part of it. Adding up all the services, more than 600 people are assisted per month.

Kickboxing – The NGO left two medalists from Mato Grosso do Sul, Kawan and Jorge. The president of the institution explains how the relationship with the athletes works. “Our relationship with young athletes is to seek sponsorship so that they can reach kickboxing tournaments”.

Kruk adds that Kawan and Jorge are 15 years old and work to help the family support themselves. “They have a busy life. We want them to continue studying, seeking the best grades and looking for sponsorships”.

Kawan Bobadilha, from Dourados, participated for the first time in the Pan American Games and was a silver medalist. For him, “it was a very good experience for being an international championship”. The 15-year-old athlete praised the organization. “They are the best collaborators after my family. Everyone is fulfilling my dream.”

Jorge Vera, from Campo Grande, won bronze in the competition. He said that “it was great to compete in the 11th Pan American kickboxing championship, it’s good to know that in other countries we also have great fighters”.

The fighter said that the NGO is an intermediary of dreams. He remembers that he didn’t have equipment to train before. “Before I had only one short that I had borrowed, after meeting Milton I got several donations of shirts, shorts, sneakers, everything that was missing he gave me through various sponsors. So for me the NGO Sonhadores is a family”.

Donations – Milton Kruk explains that the NGO is supported by donations. He is grateful for the confidence of those who receive services and those who donate. “Thank God we have a lot of people who trust my work and help us by bringing donations and delivering them to families”.

The president alleges that the greatest difficulty currently is the lack of a car. “Our difficulty is not having a vehicle to meet all the demand, sometimes helping a family, taking young people to a rehabilitation clinic and withdrawing donations”. Because of this, some donations are even no longer collected.

Service – The NGO Sonhadores is located at Avenida Rosário Congro, nº 282 – Bosque da Saúde. The contact phone is (67) 99848-3630. The organization also has an instagram @ongsonhadoresms🇧🇷

Five transition working groups have meetings at the CCBB this Monday

7 strategies to get back in shape after the holidays

“Never before has a president been in such a dangerous position.” The network is discussing the reaction of Zelensky’s wife to the statement that no one cooks breakfast for him

“It took me by surprise”: Ángel Correa already traveled to Qatar to join the Argentine National Team

Lack of diesel: the Ministry of Transport rejected criticism from the Secretary of Energy