Nejmar leaves the field of play with a swollen ankle, the nightmare of the serious injury of 2014 returns. Coach: The World Cup is not over for him November 25, 2022 00:51 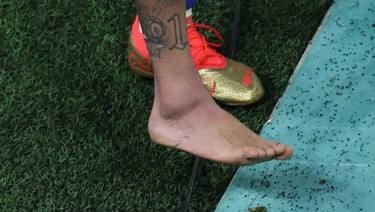 
The nightmare is back for Neymar. The Brazilian came out with a swollen right ankle in the opening game of the World Cup against Serbia. He spent the final 12 minutes plus recovery (7) on the bench, visibly in pain and with his face hidden in his jersey to hide the tears streaming down his face at the time of the substitution. His World Cup may already be over even if coach Tite is convinced otherwise. “He will play again here in Qatar. His World Cup is not over,” declared the Brazilian technician.

The PSG champion, fouled throughout the game, was injured late in the game after a collision with Milenkovic turned his ankle. After the first treatments he tried to get up, but the medical staff “called” immediately for a replacement. Anthony took his place. The Brazilian doctor, Rodrigo Lasmar, spoke of a “sprain of the right ankle. He has already started the treatment (with ice), but we will have to wait 24-48 hours to understand the seriousness of the injury”. A fracture, but also a ligament damage would mark the end of Neymar’s World Cup. Brazilian fans shuddered, even as they saw their champion leave the field (without his right boot) and then heard Tite’s hopeful words.

During the match, Neymar received 9 odd fouls, the last one he threw to the ground. The Brazilian star is already haunted by the ghosts of 2014 when he was injured in the quarter-finals and had to miss the semi-final against Germany, which his team-mates then lost 7-1. “They robbed me of the final”, he said in tears while leaving Selecçao’s shelter 8 years ago. A scene that, for the sake of football, we hope will never happen again.

Shpëtim Duro: A match with many qualities, Serbia and when it loses it gives a spectacle

We had an annual income of 10 percent on the accumulated pension account, but we lost one year’s income. But the principal amount did not decrease. “face to face”

The price of oil in the country is rising again! The decision is made, here it will be sold until March 25

Albania registers a loss of life from COVID, 61 citizens are infected in 24 hours!