Mauricio Macri reappeared on TV: the questions that most compromised him and his uncomfortable answers 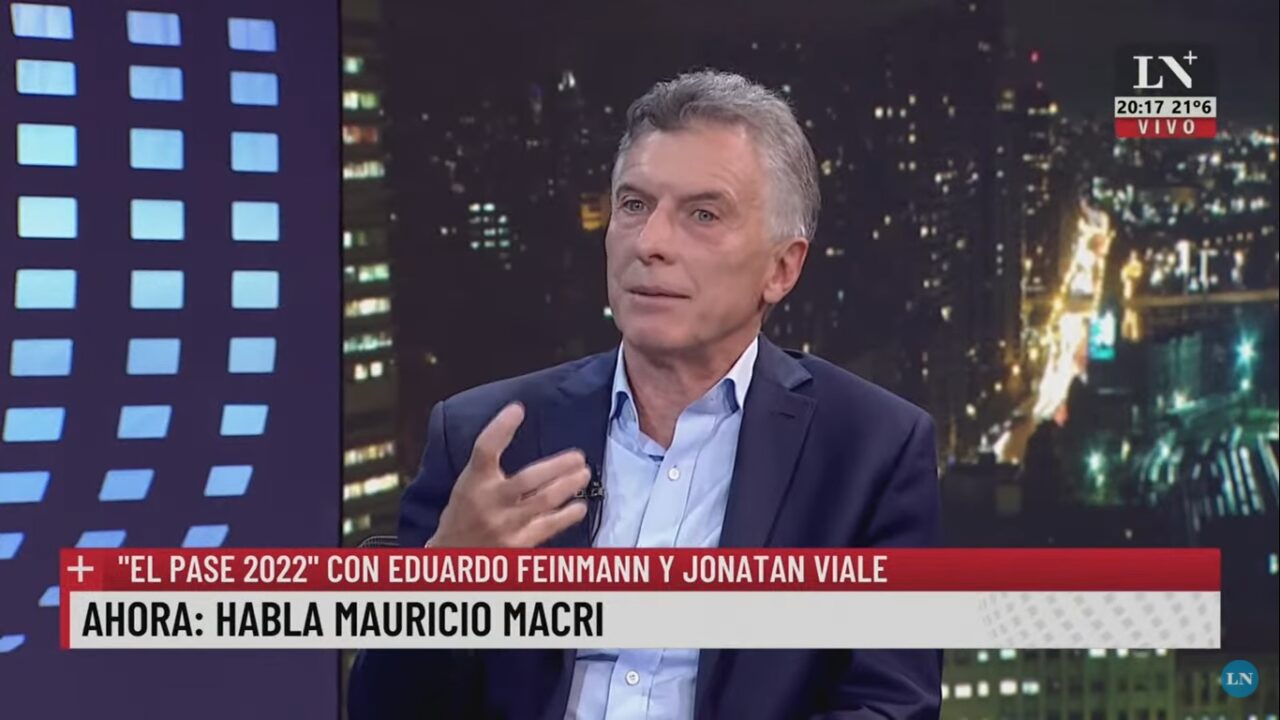 Mauricio Macri reappeared this monday in TV. It was in an interview that journalists conducted Edward Feinman and Jonathan Viale in El Pase 2022 (La Nación +), in which the former president talked about everything. Or, at least, almost everything, since in some sections of the talk some questions it compromised and the leader of the PRO ended up stating awkward answers.

The interview lasted almost 43 minutes and in it, the founder of the yellow party was able to give his opinion on the management of Alberto Fernandez and the role of the vice president Cristina Kirchner; the future of Together for Change and yours in particular, with a view to 2023; his gaze on Vladimir Putin and the foray he undertook towards Ukraine; and the latest Government measures in relation to the critical economic situation, such as withholdings, and price controls, among others. Likewise, there was no lack of consultations about his relationship with his political peers.

“He asks you for now”

The first in which Macri was somewhat hesitant was when Feinmann asked him: “In the Government they say that you are to blame for this bad moment that we are experiencing. And Cristina thinks this thing blows up in a month. I see you as very positive”. Given this, the former president said: “Here the change comes from the bottom up, the people are going to take away the leaders who do not understand that we do not want them to run over us, to control us.”

Almost interrupting him, Viale retorts: “Well, but that’s the future. He asks you for now”, and Macri said: “I am not going to comment on the things that the vice president may say because they are transcended. I am not a political commentator. She lost touch with reality a long time ago. She dreamed of the fantasy of belonging to a league of countries with authoritarian governments and she is falling apart with the criminal invasion that (Vladimir) Putin has made of the Ukraine.”

That was a question from Feinmann, about which Macri introduced: “Today I see someone different from the one I treated. I was with him four times, where we built a relationship of mutual respect. I visited him in the Kremlin. But authoritarianism is not a photo, it is a film. And when the human being concentrates that level of power, the tendency is to lose balance”, he pointed out.

The journalist felt that he did not answer the question as he wanted. So, he insisted: “Okay, but he didn’t answer me. What is Putin for you? (US President Joe) Biden called him a war criminal.” “Clearly what he has done is a criminal act. Today innocents are dying senselessly,” agreed Macri.

To all this, Viale got involved and said: “(Elisa) Carrió said he was (Adolf) Hitler.” “I wouldn’t compare. Hitler is a misfortune that humanity had and you should not compare him with anyone, ”the former president made a difference with respect to the leader of the Civic Coalition.

In another of the questions, Viale stated: “Wouldn’t you like to be a kind of chancellor without charge, ambassador, of (Horacio Rodríguez) Larretafrom (Patricia) Bullrich or whatever?” And Macri said: “I feel comfortable helping as I am helping. In due course, I will find my place.” To which the driver of + Realidad commented: “Larreta fell. She was looking and fell. Horacio didn’t like your answer…”. “And why not Horacio and Patricia yes?” Macri said, on the verge of ‘stepping on the stick’, and Viale put suspense: “I don’t know, we’ll have to ask Horacio.”

How is the relationship with Carrió?

Subsequently, Feinmann took up the figure of ‘Lilita’ Carrio: “How is your relationship with Carrió?”. “Well, well,” said Macri with a doubtful tone. “Now convinced,” Viale said. “Don’t you see me convinced?” Macri asked him, and the journalist clarified: “Now say it convinced.” “I’m fine, I’m fine. We spoke recently on the phone. Each one with his style, but we have a respectful relationship, ”said the former head of state.

And with Larreta and Vidal?

Then, it was time to ask him about his two political sides, today a little further away, the head of the Buenos Aires Government Rodriguez Larreta and the national deputy Maria Eugenia Vidal. “How is your personal and political relationship with Larreta?” Viale asked, and Macri immediately confirmed, albeit succinctly: “Very well, she is perfect.”

“And with María Eugenia Vidal?” Feinmann retorted. With her, Macri noticed it a little more severe. He began by saying that he sees her “very well too, wanting to get back on the political scene.” Given this, Feinmann adds: “Do you see her as a candidate for president?” But the founder of the PRO lowered her by saying that she “feints” and that she “doesn’t have as much decision as Patricia has, that she is also very good, and Horacio.”

The interview proceeded normally, with minimal, but not minor, incidents. Lastly, they consulted him about “some huge posters ‘Macri President 2023’Feinmann commented, who asked, “Did you make them?” “No. The bad ones are made by those posters to see if they can generate internal noise. That is quite childish”, questioned the opposition leader, who continues to flirt with his “Second Time”, which could lead to an exhaustive internal (or break) in Together for Change.

Nena told a state home that she was abused by an "uncle" and they arrested him, but after 3 days they released him The victim is 7 years old. The suspect will be monitored through an electronic device.

Hebe de Bonafini: “We need a general strike so they know who makes the country”

Do you urinate unknowingly when you sneeze or cough? Know urinary incontinence

Natural covid antibodies in children persist for up to seven months

Femicide in Buzios: they are looking for the ex-husband of the Argentine businesswoman stabbed to death